Sam Walker and Charlotte Bardsley bounced back from losing their opening singles matches to remain in contention to qualify for the knockout stage as the European Championships opened in Warsaw today. 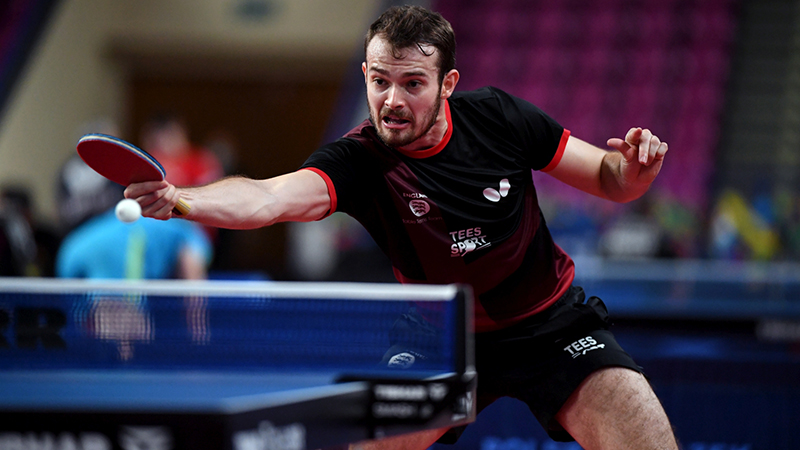 Sam Walker and Charlotte Bardsley bounced back from losing their opening singles matches to remain in contention to qualify for the knockout stage as the European Championships opened in Warsaw today.

With group winners gong straight through and runners-up facing further qualifying rounds, Walker’s defeat to Dimitrije Levajac of Serbia in the first match was a blow. The Englishman battled back from 2-0 down to level, but his momentum stalled as he lost the decider 11-3.

But victory over Samuel Kulczycki of the host nation in his next match meant he kept alive his hopes of joining Paul Drinkhall in the knockouts. After winning the first, Walker saw his opponent level, but he took the pivotal third 11-9 and then confirmed victory in the fourth against a young opponent who at times showed his frustration.

Kulczycki’s 3-0 win over Levajac in the group’s final match meant a three-way tie, and it was the young Pole who came out on top when the maths were figured out. Walker had done enough to finish second and go into the second qualifying stage, where he will face Luxembourg’s Eric Glod on table 2 at 10.55am UK time.

Bardsley was up against top seed in the group, Katarzyna Grzybowska-Franc of the host nation, and although to took the match into a fourth game, could not claim victory.

Her second opponent was Alexandra Chiriacova of Moldova and when Bardsley led 2-0 it looked good. But her opponent battled back, winning the next two and then saving five match points from 10-5 down in the decider.

Bardsley engineered a sixth match point, which she took, to register her opening singles win. Her third oppponent in the group is Bernadett Balint of Hungary, who she faces at 10.20am UK time on Wednesday, on table 2.

In the Mixed Doubles, Walker & Tin-Tin Ho had a dramatic finish to their match in the second qualifying round, against Vladislav Rukletsov & Katsiaryna Baravok of Belarus.

After going behind, the English pair won sets two and three, only for their opponents to level. 11-9 in the fourth was the closest of those opening games, but the fifth went deep, all the way to 20-18 in favour of the Belarus pair. The match was, unfortunately, not on one of the live-streaming tables.

Earlier, Bardsley was knocked in the first qualifying round, alongside Martin Andersen of Denmark. The pair were beaten in four by Moldova-Croatia partnership Andrei Putuntica & Andrea Pavlovic.

The final match of the day was in the Women’s Doubles as Bardsley & Tin-Tin Ho faced Alina Jagnenkova of Estonia, alongside Bardsley’s singles opponent Chiriacova.

Wales’ Anna Hursey started her campaign in group 3 of the Women’s Singles with a 3-0 (3, 8, 6) victory over Maria Yovkova of Bulgaria. She and partner Michael Tauber of Israel were defeated in their opening Mixed Doubles tie in the second qualifying round, 3-0 (11-7, 11-5, 11-8) by Serbian pair Zsolt Peto & Izabela Lupulesku.