Wahlgrens make their mark in England 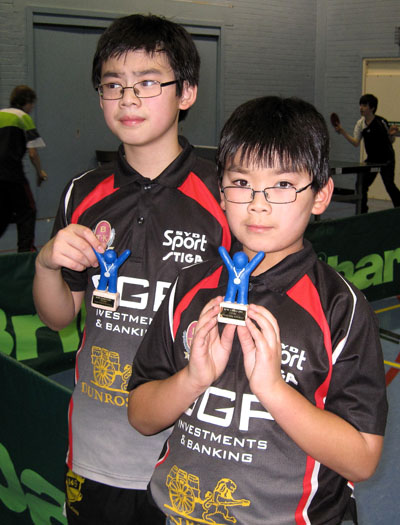 Erik close to beating England no 3

We were pleased to welcome the Wahlgren family, over from Sweden on a short reconnaissance mission.  They will be with us for the whole of the next academic year, based in Didcot.  Erik (12) and Johan (10) practised at Moreton on Wednesday evening (Feb 12) and at Kidlington Forum on both Thursday and Friday evenings; then they played in the Junior Open Tournaments at Grantham on Saturday and at Burton on Sunday. This was a very full programme and I thought that by the final stages at Burton the intensity of it all, not to mention tiredness, was coming home to both boys

At Grantham both progressed from their groups. Erik went on to reach the quarter-finals of Under 13 Boys, and had a good lead in the 5th against England’s third ranked player, Shayan Siraj, but couldn’t quite finish it off, losing 9-11.

At Burton both gained runners-up trophies in their respective age groups (Under 13 and Primary). Johan was in a round robin and lost his first match to Louie Evans (Wales), but won the rest. Louie lost his last match against Nikit Sajiv (Surrey), which produced a triple tie and the excitement of a countback, with Nikit 1st, Johan 2nd and Louie 3rd. Erik beat Cade Short (Wales) 3-0, George Long (London/Middlesex) 3-2 and Jaycee Chan (Middlesex) 3-0, but lost the final 2-3 to Joseph Roberts (Wales). He also reached the semi-finals in the Cadet (U15) age group. These were fine performances on such a whistle-stop tour and we are already looking forward to welcoming them back in September, when they should strengthen our teams enormously.