VIP visit at Fusion ahead of planned development

Former MP and London Mayoral candidate Steven Norris joined a session at Fusion TTC as he checked progress of an exciting regeneration plan in the New Bermondsey area of London. 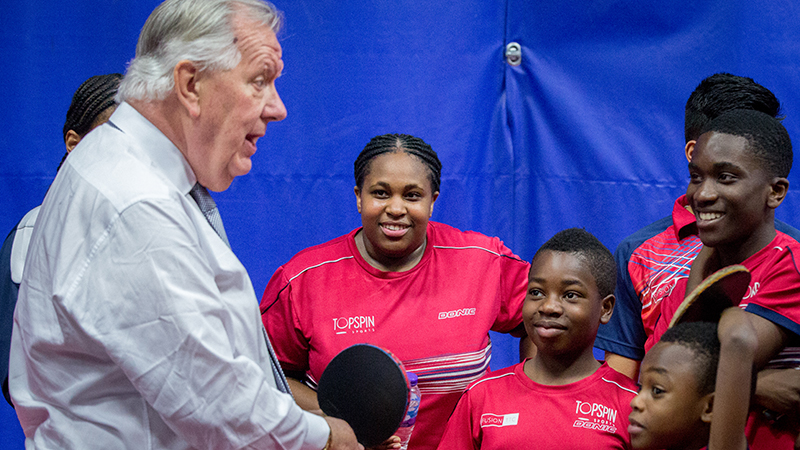 Former MP and London Mayoral candidate Steven Norris joined a session at Fusion TTC as he checked progress of an exciting regeneration plan in the New Bermondsey area of London.

Mr Morris is a trustee of the Surrey Canal Sports Foundation, which will run the planned Energize sports facility – including a state-of-the-art table tennis hall – which is being built as part of a wider redevelopment in the area over the next few years.

Mr Norris, who was Transport Minister in the John Major government, visited in order to review the progress of both Fusion and the London Thunder basketball club, which currently share premises in Stockholm Road in the redevelopment area.

He was joined by John Gallagher, a Rugby World Cup winner with the All Blacks in 1987, who was born and brought up in the area and is now a director of Renewal, the agency leading the regeneration and which owns the building.

The visitors played with some of the young players and mingled and got into conversation with the Fusion members, enabling them to deepen their understanding of the club and its culture.
Mr Norris said he was enthused by what he saw and added: “It was such a pleasure to see the mixture of young and mature players within the same environment.”

Energize will include a host of sports facilities, including a dedicated table tennis centre housing up to 40 tables and providing full-time access for Fusion TTC to provide Table Tennis for the community and a new home for all.