Read all about the latest developments that the video platform Recast have made in the last year ahead of watching the National Qualifiers live on the platform on Sunday. 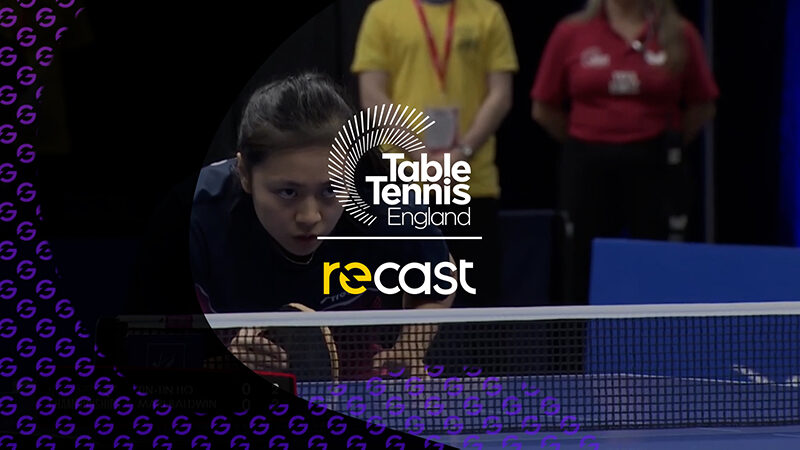 In the first half of 2021, Table Tennis England launched a partnership with the sports video platform Recast to directly generate income for grassroots table tennis.

Since the launch of the partnership Table Tennis England has generated around £1,000, simply through fans watching content on the platform, which will be re-invested into the grassroots of our sport.

Recast is a revolutionary direct-customer video platform that connects rights holders, fans and brands on one single platform. Recast combines the ability to watch the best sporting action from any device and the potential to earn in-app credits called ‘Casts’ – for both viewers and rights holders.

Rights holders can monetise their content, from 10 second clips to full live games, without the upfront costs of having their own platform. Fans can earn or purchase credits, and when they watch the sports they want, the rights holders will earn a payment.

Recast has sent shockwaves through the industry and has made significant strides in recent months, including, for a second-year running, being named as a ‘super-early stage’ category winner in the Broadcast category of the STA Startups Awards.

There have also been numerous developments to the platform and experience, such as being able to stream directly from a mobile phone, enabling athletes and organisations at all levels to produce and monetise their live sporting content.

In addition, other new features include a live chat service, video scheduling and a desktop redesign, making it easier for fans to engage with their favourite content.

With the likes of Premier League champions Manchester City and Table Tennis England leading the way in partnering with Recast in its early stages, the platform now boasts an array of rights holders including British Fencing, Glasgow City FC, World Curling Federation and Jesse Lingard’s JLINGZ esports, amongst many more.

Table tennis athletes looking to learn more about how they can utilise Recast, head here for more information.