Dan Bullen, Alex Bland and Ryan Henry did not win any medals at the PTT US Open in Las Vegas but the three young British Pathway Squad athletes gained valuable experience and all recorded some good wins over the three day tournament. 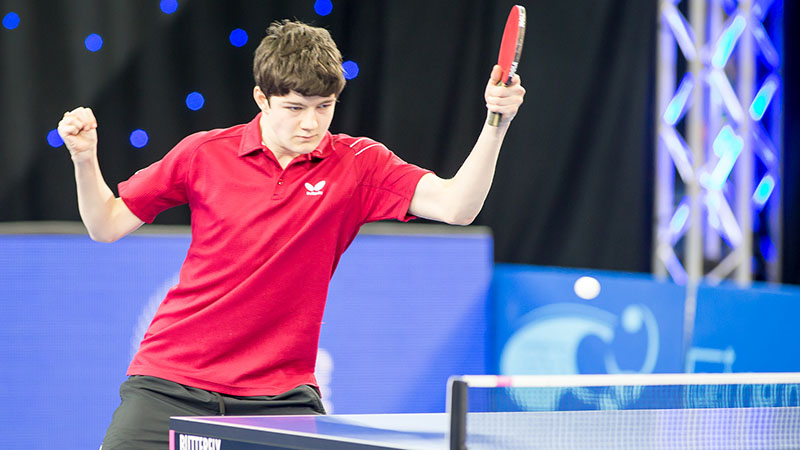 Dan Bullen, Alex Bland and Ryan Henry did not win any medals at the PTT US Open in Las Vegas but the three young British Pathway Squad athletes gained valuable experience and all recorded some good wins over the three day tournament.

Bullen began men’s class 4-5 with a good 3-0 win against the American Stuart Caplin and after a 3-0 loss to top seed Ki-young Kim from Korea he secured his place in the knockout stages with a battling 3-2 win against another Korean Jang Sub Choi. The 20-year-old from St Neots lost his quarter-final to a third Korean, Cha-Soo Kang, 3-0.

In men’s class 6-7 Bland received a walkover against Kazuya Kaneko from Japan and went through to the knockout stages as group winner after a 3-0 win against the Korean Teak Kon Kim. The 18-year-old from Rotherham received a bye into the quarter-finals but was beaten by the PanAmerican team champion Masoud Mojtahed 20-18 in the third.

Henry went out of men’s class 8 after 3-0 losses to the former PanAmerican champion Ian Kent from Canada and the Columbian Diego Henao Quintero but did record a 3-0 win over the American Jeremy Gore.

Bullen and the American Mohan Vallabhapurapu made a good start to the round-robin men’s class 4-5 team event with a 2-1 win against the combined team from El Salvador and France. They won the doubles 3-1 against Gabriel Espinoza Macal and Yorick Adjal and Bullen took the deciding singles against Espinoza Macal 3-0 after Adjal had levelled the tie with a 3-1 win against Vallabhapurapu.

Against the number one American team of Ahad Sarand and Stuart Caplin they lost a close doubles 3-2 and Bullen was beaten 3-1 by Sarand to give the Americans a 2-0 win.

“It was an up-and-down competition for me,” said Bullen. “I played well in some matches and not in others. It was an experience dealing with the time difference and all the pushing I had to do and the heat. But I have enjoyed the experience and have a lot to work on.”

Men’s class 6-7 was also played in a round-robin format and Bland and his partner Gabriel Seguin from Canada began with a narrow 2-1 loss to the American team of Ian Seidenfeld, Ari Arratia and Masoud Mojtahed. After losing the doubles to Seidenfeld and Mojtahed 3-2, having led 2-0, Bland secured a hard-fought win against 16-year-old Seidenfeld 11-5 in the fifth but Mojtahed secured the win for his team with a 3-1 win against Seguin in the deciding singles.

Bland and Seguin lost another close doubles match to Japan 12-10 in the fourth but the British teenager levelled the tie with a 3-1 win against Takuya Shibasaki before Masachika Inoue won the deciding singles for Japan against Seguin 3-1. The British/Canadian team registered their first win with a 2-0 victory against a combined team of Osvaldo Torres Navarrete from Chile, the American Mathew Weber and Young Min Lee from Korea. After winning the doubles against Torres Navarrete and Weber 3-0, Bland beat Lee 3-0 in the first singles.

In their final match against Korea, Bland and Seguin lost the doubles to SunGil Kim and Eun Kyun Kim and Bland was beaten 3-0 by Eun Kyun Kim.

“This tournament has been a good experience but different to other international tournaments I have been to,” said Bland. “It has come with a few additional challenges that I can learn from and improve going forward. These include my ability to transition from a relaxed and different environment to then go into competition mode as well as being able to deal with the time difference and any mental tiredness that goes with it.

“Although my results have been very up-and-down and my overall performance in my opinion was pretty poor I still got some good wins and I need to remember to look at the positives as well as work on improving the negatives.”

In men’s class 8-10 Henry and his American team partner Nevielle Brabrook began with a 2-0 loss to a combined team from Japan and Finland, losing the doubles to Koyo Iwabuchi and Nobuyuki Suzuki 3-0 before Henry lost in four sets to the class nine world No 9 Iwabuchi.

The British/American partnership beat a combined team from Canada and USA 2-0, with 18-year-old Henry beating the American Jeremy Gore 3-0 in the singles, but went out in the quarter-finals after a 2-0 loss to the Columbian team of Diego Jimenez Velandia and Luis Montoya.

“It has been a very challenging tournament,” said Henry, from Ardrossan, “with some very tough matches. I feel it has given me a chance to take note of some good and bad points of my game to work on over the next few months and to improve for future tournaments.”

“It has been a challenging but positive tournament,” said British Para Table Tennis Pathway Manager Shaun Marples. “There were a lot of factors to contend with but I think the boys have conducted themselves in a positive manner and this tournament has been great for their development as athletes.”