The prestigious Cippenham Junior 4-Star Open, attracting many of the country’s top players, was a huge success and, such was the demand for places, that it was oversubscribed for the events played on Sunday. 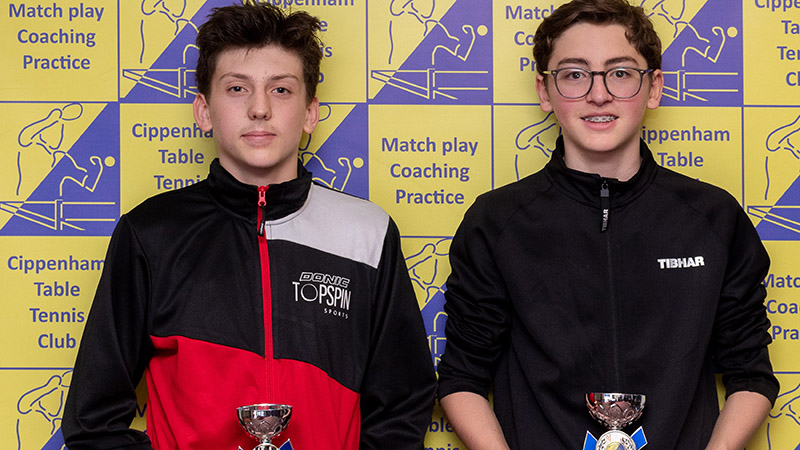 Cippenham Table Tennis Club held its first open tournament for nearly two years. The prestigious Cippenham Junior 4-Star Open, attracting many of the country’s top players, was a huge success and, such was the demand for places, that it was oversubscribed for the events played on Sunday.

This two-day event was played in two age groups: cadets (under-15) on the Saturday and juniors (under-19) on the Sunday.

The tournament got off to a cracking start on Saturday morning with the Cadet Boys’ Singles, an event which attracted all the top six players in the current England rankings. Seven of the top eight seeded players won their preliminary round groups, the exception being Francesco Bonato who was beaten by Lewis Austin. Austin then made his exit from the event in the first of the knock-out rounds, beaten by Zain Hussain who then, in turn, lost one round later to Ryan Chung.

All the other seven seeds made it through to their allotted places in the quarter-final but that was the stage when proceedings went awry for two of them. Both the third and fourth seeds failed to progress to the semi-finals, third seed Larry Trumpauskas losing to sixth seed Ralph Pattison while fourth seed Yiannis Kazantzidis was eliminated by eighth seed Isaac Kingham.

Kingham then staged an extraordinary comeback in his semi-final against England No 1 and top seed Jakub Piwowar. Having won the first two games, Kingham let his opponent back into the match and the score stood at two games all and 9-3 to Piwowar in the fifth. However, an inspired Kingham then went on a run of eight consecutive points to win that deciding game 11-9.

Pattison also made his quarter-final victory count double as he progressed into the final by defeating second seed Oliver Maric-Murray. The final was therefore played between the sixth and eight seeds and it was the lower of two, Isaac Kingham, who prevailed over four games 3-1.

It was the turn of the girls to take over in the afternoon matches. Eight of the top 12 England ranked players were involved plus Jersey’s Hannah Silcock who plays for the Cippenham team in the Junior British League.

All the seeds won their preliminary round groups but four of the eight fell in the first of the knock-out rounds. Cippenham’s Rachael Iles, seeded fourth, was beaten by Chui-Que Wong, sixth seed Naomi Coker went down to Cippenham coaching group member Mia Lakhani, seventh seed Ruby Elliott fell short against Jonabel Tahuibao and eighth seed Emily Cheung was eliminated by Caron Charles.

Wong was the only one of the unseeded players to win her quarter-final and she was joined in the semi-finals by the first, second and third seeds. The semis also ran true to seeding with top seed Maliha Baig beating third seed Sienna Jetha and second seed Hannah Silcock eliminating Wong. Silcock led the first game of the final 10-8 and that was the closest Baig allowed her to approach as the top seed won the final 3-0.

Sunday brought the turn of the junior events with a host of highly ranked players joining those cadets who had stayed for the second day. There was an immediate shock in the boys’ groups when top seed and England No 3 Naphong Boonyaprapa was beaten by Kazantzidis, ranked 112 places lower. Boonyaprapa, however, did progress to the main competition by virtue of his second place in the group but, consequently, was displaced from the top of the draw. There were no such surprises for the other top seven seeds who all won their groups without mishap.

Top place in the draw kept changing hands as Kazantzidis lost his second-round match to Oliver Maric-Murray who then, in turn, lost one round later to Ralph Pattison. In their quarter-final Pattison lost to Larry Trumpauskas and it was after that point that the musical chairs ceased with Trumpauskas, who had only got through to the knock-out stage as a runner-up in his group, beating third seed Nahom Goitom to book his place in the final.

Round two also brough another shock as fifth seed David Gofton was eliminated by Daniel Goitom who then became another Trumpauskas victim one round later.

In round three, fourth seed Oliver Cornish was unfortunate to be matched against the displaced top seed Boonyaprapa and lost, as did eighth seed Harry Yip against David Hay. Hay then met his match when faced by Nahom Goitom in the quarters. In the other quarter-final matches, Boonyaprapa beat sixth seed Bertie Kelly while second seed Rhys Davis was too good for seventh seed Joshua Bruce.

In his semi-final, Davies was up against pre-tournament favourite Boonyaprapa and what a match it was! Boonyaprapa won the first two games before Davies stormed back to win the next three with victory eventually secured at 11-9 in the fifth.

Davies then went on to win the title with a 3-1 victory over Trumpauskas in the final which, coincidentally, was a rematch of their encounter in their preliminary round group.

Of the locals, Shae Thakker won his group but was then eliminated in the first knock-out round by the higher ranked Barney Mindlin while William Saint, runner-up in his group, nearly pulled off a sensational win but lost to eventual finalist Larry Trumpauskas 3-2.

The tournament concluded with the Junior Girls’ Singles in which there were shock results galore. The eventual winner was Tianer Yu who had failed to register for the event by the closing date. Had she entered on time, Yu would have been top seed but was later allowed into the draw by virtue of the withdrawal of the fourth seed.

Second seed Samadhi Udamulla was defeated in her group by Emily Flynn 12-10 in the fifth and the shocks continued into the knock-out rounds. Eighth seed Abbie Hurley lost her first-round match to Eva Eccles who, in turn, was beaten by Jodie Morris in the next round.

Another first round faller was sixth seed Ruby Elliott, beaten by Jyothi Ghanta who then lost to Evelyn Pace one round later. Pace then beat Isabelle Lacorte and, in the semi-final, Jodie Morris, as she carved her way through the field to reach the final. However, the final was one step too far for the unseeded Pace as Yu won comfortably.

Two Cippenham players were pitched against one another in the groups. Hannah Silcock and Rachael Iles fought a titanic struggle that went all the way to deuce in the fifth. Both players had a match point before Silcock, the Jersey-based player, won 12-10.

In the knock-out stages, Silcock beat third seed Saskia Key before becoming one of Yu’s victims while Iles was eliminated by Scarlett Anders. Anna Piercey finished third in her group and thus qualified for the plate competition where she lost to Mia Longman.

The tournament was organised by Cippenham club chairman Ken Phillips and refereed by Steve Smith. The Club also places on record the grateful thanks to the army of qualified umpires and other volunteers who officiated and in many other ways helped each day.