Tom and David step up their injury comebacks

England duo Tom Jarvis and David McBeath are stepping up their rehab after hip operations by returning to the table at squad practice sessions in Nottingham. 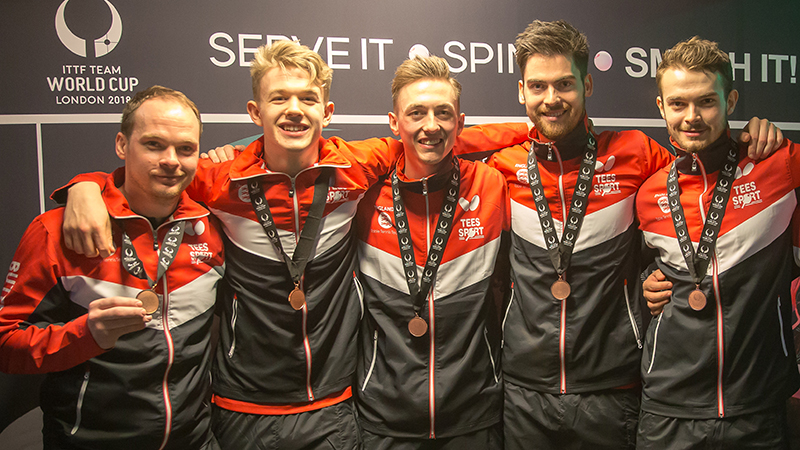 England duo Tom Jarvis and David McBeath are stepping up their rehab after hip operations by returning to the table at squad practice sessions in Nottingham.

Both went under the knife last year to deal with ongoing issues, McBeath with his right hip and Jarvis with his left.

After a recovery period and physio, they have now moved to the next phase by starting on-table practice at the David Ross Sports Village.

Not being physically at the same level as the other players in the squad just yet means they are practising together and helping each other to rediscover the crucial movements they need around the table, as well as the importance of feeling bat on ball.

David said: “Last week was the first week I’ve been able to play properly. It’s okay so far – I feel quite good.

“Tom and I are sort of ‘England guys returning to training’ and we both need similar things at the moment in terms of feeling the ball on the bat. We obviously both help each other, so it’s not too bad.

“I’d love to be able to join the other guys and play twice a day, but that’s not going to happen for a couple of weeks at least.

“I’ve been working with the physio at David Ross Sports Village and he’s been really helping me. He’s happy with where I’m at, so it’s all going in the right direction.”

Tom admitted the initial return was a shock physically but was glad to get back on the table after his enforced period of rest.

He said: “It’s difficult. I’ve never had an injury like this and was probably a bit naïve when I was given a three-month mark and thought it would be all okay after that. But it’s not like that and I’m struggling with a bit of muscle ache.

“David’s probably a little bit ahead, but were going through it together at least. It’s nice to be back in Nottingham – I haven’t really been out of the house for a few months and I’ve been really bored.

“It’s about remembering what it’s like to be on the table. I don’t have full trust in my movement yet, so I’m playing stuff from one spot.”

With most competitions on hold, neither player has a specific fixed target – both play in the German leagues which are postponed until at least the end of March, and neither is attending the WTT Hub events in Doha next month.

David said: “Ideally, I would have a plan to return, but obviously I’m waiting for that. The season in Germany has been delayed until the end of March, into April, but I don’t know if that’s going ahead, so it’s hard to plan. But if it goes ahead, that will be my main aim.

“The next few weeks will just involve gradual progression and if I don’t have any pain I will keep going forwards – that’s the benchmark.”

Tom added: “I’ve got to be careful. There’s no rush to get ready for anything – I feel if I had a date in mind, I’d rush things. I won’t enter anything until I’m fully fit.”

Before his operation, Tom had helped his German club Fortuna Passau to one of the biggest results in its history, overcoming top-flight opponents Post SV Mulhausen 3-2 to reach the quarter-finals of the German Cup.

The quarter-final against Ochsenhausen was the last match Tom played before his operation and pitted him against world No 6 Hugo Calderano. Playing through pain, he was unable to give his best and went down 3-0 (11-5, 11-5, 11-5) as Passau went on to lose 3-0.

“Normally I’d have been buzzing to play in that match but I think it was the most pain I’d been in. I couldn’t put weight on my left leg,” he said.

“I talked to doctors and they said I could try to manage it with injections but I’d probably need the operation anyway, so we decided to do it now – if we’d waited, it’s nearer the Commonwealth Games and that could be a problem.”