Tin-Tin Ho’s Olympic debut ended in defeat but she says she was proud of the way she performed against Commonwealth Games gold medallist Manika Batra of India. 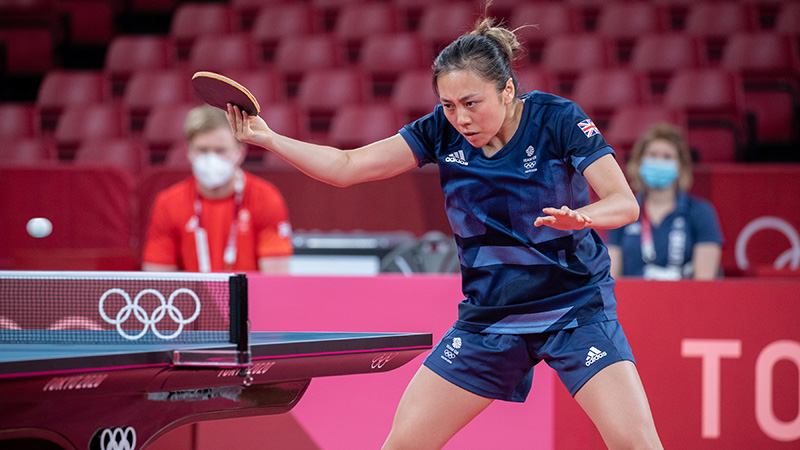 Tin-Tin Ho’s Olympic debut ended in defeat but she says she was proud of the way she performed against Commonwealth Games gold medallist Manika Batra of India.

Tin-Tin started her Olympic career positively, by winning the first point and going 4-1 up with a couple of blistering backhands thrown in.

It set the tone for a front-foot performance, though ultimately one in vain against an opponent ranked more than 30 places above her and who won gold at the 2018 Commonwealth Games champion – not the most favourable draw for your Olympic debut.

And when she did find herself in a possible minor crisis at 6-10 down in the third, she kept her composure, kept the ball on the table and won the next six points, via a GB timeout at 10-9 – taking the game with help from a dead net cord.

Ho led the next game 8-6 but again Batra went on a run of points when it mattered and brought up two match points. And although Ho saved one, there was no coming back.

Coach Gavin Evans could be heard telling his athlete that it had all come down to fine margins and that she had fought for every point.

That being the case, Tin-Tin’s assessment was quite measured, even if the result was not what she wanted.

She said: “I felt like I played quite well. I think I’ve made improvements but it was just quite hard because you are playing against the top, top level.

“I found Batra quite difficult with her style, I didn’t get used to it until the third game, but then I couldn’t take that game, unfortunately.

“To get a lead was good, but she managed to figure it out and then I didn’t change quick enough.

“I was happy with how I played but it’s a shame the result didn’t show that.”

Being part of Team GB will motivate her to continue to seek to improve and she added: “The whole experience was really cool and I’m definitely really happy (to have qualified). I’ll take that forward and use that as confidence that I can get some good results in future.”