The British Para Table Tennis Team rounded off a successful tournament at the PTT Japan Open in Tokyo by taking three gold medals in the team events. 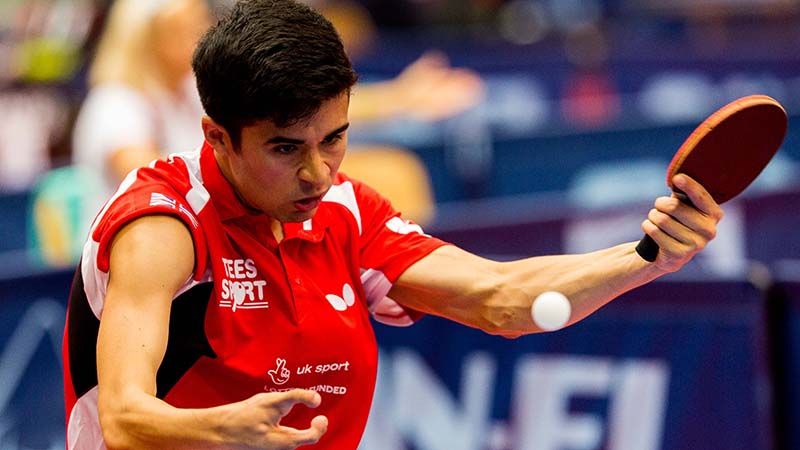 The British Para Table Tennis Team rounded off a successful tournament at the PTT Japan Open in Tokyo by taking three gold medals in the team events.

There were also silver medals for Aaron McKibbin, Billy Shilton and Ross Wilson in men’s class 8, Martin Perry with the Frenchman Esteban Herrault in men’s class 6 and Will Bayley with Jochen Wollmert from Germany in men’s class 7.

The medals come after Bayley’s gold headlined the British haul in the individual events earlier in the competition.

Facey Thompson and Stacey defeated the Russian/Malaysian partnership of Iurii Nozdrunov and Chao Ming Chee 2-0 and Benedicto Gaela and Pablo Catalan Jnr from The Philippines 2-0 to top their group in men’s class 9.

They beat Daniel Gustafsson and Anders Andersson from Sweden 2-0 in the semi-final and secured the gold with a 2-0 win against the top seeds from Ukraine, Maksym Nikolenko and Lev Kats.

Their final match in the round-robin men’s class 10 event against the home team of Koyo Iwabuchi and Nariaki Kakita proved to be decisive and Daybell and Karabec won 2-1 to take the gold.

“It was nice to pick myself up after the singles,” said Daybell, “winning against the player I lost to in the semi-final yesterday. It was great playing in front of the home crowd as they really got behind their man and the GB team got behind me.

“I felt I managed to raise my game and found a level I’ve really not found in the past few months which is positive going into the next few tournaments in terms of qualification (for Tokyo 2020).

“Ivan and I have a bit of a rivalry and have had some great matches against each other so it was nice to be playing on the same side of the table. He is a great champion and it was very enjoyable playing with him. I’m glad we could get the gold and now it is onwards to Thailand next week and hopefully I can play more at the level I expect of myself.”

In the round-robin men’s class 5 event Hunter-Spivey and former world and Paralympic champion Urhaug beat the Thailand team of Teeradech Klangmanee and Norakan Chanpahaka 2-0, Kentaro Doi and Toru Nakamoto from Japan 2-0 and the Netherlands/Japan partnership of Gerardus Van Grunsven and Ryota Nakamura 2-0. Their final match against Germany was the deciding match and they beat former World champion Valentin Baus and Jan Guertler 2-1 to take the gold.

Bayley and Wollmert have between them won the last three Paralympic titles in men’s class 7 and they came through their group comfortably with 2-0 wins against the Japan 2 team of Kazuya Kaneko, Kosuke Hemmi and Hiromoto Kita, Lee Ming Yip and Chen Silu from Hong Kong and the Thailand 2 team of Yuttana Namsaga and Suriyone Thapaeng.

They beat the first Japanese team of Katsuyoshi Nagi and Masachika Inoue 2-0 in the semi-final but lost the final to the combined team from Thailand and India of Rungroj Thainiyom, Chalermpong Punpoo and Naazim Khan 2-0.

“It was brilliant playing team again with Jochen,” said Bayley. “He was playing great doubles and I was so tired by the final (after playing so many matches in the singles) that I felt I let him down a bit. But next time I hope we can win a tournament together.”

With world champion Wilson rested for the men’s class 8 team event Aaron McKibbin and Billy Shilton topped their group with 2-0 wins against Hideo Tamai and Hiromi Sato (Japan2) and the Thailand team of Phisit Wangphonphathanasiri and Komkrit Charitsat.

That took them into the semi-finals where they beat the Japan1 team of Arufuahirokazu Tateishi and Takumi Shukunobe 2-0 before losing 2-0 in the final to the Ukrainian partnership of world No 1 Viktor Didukh and world No 4 Ivan Mai.

“We wanted Billy to play singles to try and help his chances of (Paralympic) qualification,” said McKibbin, “and it went to plan as we won all our matches 2-0 until the final and Billy played well in the singles. Overall it has been a good competition for me with some more good wins and my form has been consistent leading into the Europeans. It’s been amazing to see Tokyo ahead of the 2020 Paralympic Games.”

Perry and Herrault were 2-0 winners against the Greek team of Georgios Mouchthis and Marios Chatzikryiakos and the Japanese team of Kazuki Shichino and Junki Itai. They played Germany for gold in their final match of the round-robin men’s class 6 event but had to settle for silver after losing 2-1 to Thomas Rau and Tim Laue.

In the women’s combined class 2-5 round-robin event Megan Shackleton and Lisa Hentig from Germany began with a 2-0 win against Yukimi Chada from Japan and Lisa Di Toro from Australia but subsequent losses to the second Thailand team of Wassana Sringam and Panwas Sringam (0-2), the Thailand 1 team of Wijittra Jaion, Dararat Asayut and Pattaravadee Wararitdamrongkul (1-2) and the Korean team of Mi Gyu Lee and Young A Jung (0-2) left them in fourth place and out of the medals.

Women’s classes 6 and 7 were combined in a round-robin format and Fliss Pickard and Rebecca Julian from Australia also finished out of the medals after losing to Stephanie Grebe and Corinna Hochdorfer from Germany (0-2), the Russian team of Victoriya Safonova and Maliak Alieva (0-2) and Seongok Kim and KunWoo Lee from Korea (0-2) although they did beat the Indian partnership of Vaishnavi Sutar and Poonam Poonam 2-0.