Three new Directors appointed to our Board

Kwadjo Adjepong, Ray James and Dr Emma Vickers have been appointed to the Board of Table Tennis England after an open recruitment process. 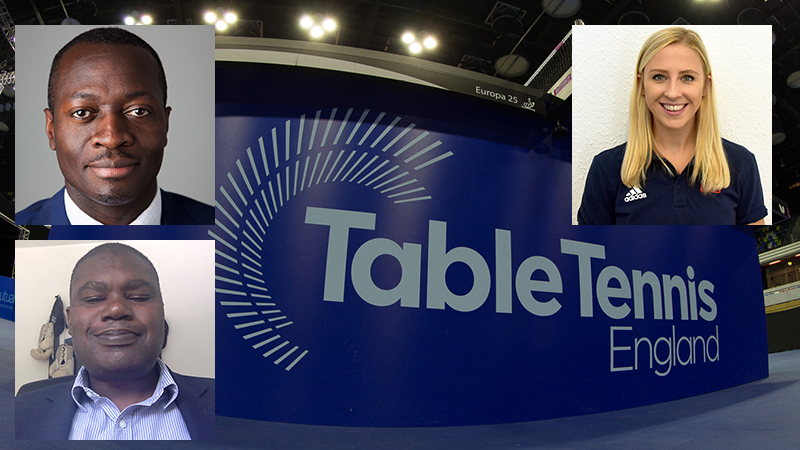 Kwadjo Adjepong, Ray James and Dr Emma Vickers have been appointed to the Board of Table Tennis England after an open recruitment process.

Doug Livingstone, Dee Paterson and Mark Quartermaine are all leaving the Board after completing a full four-year term.

The three new Directors were among a high-quality list of 20 applicants, seven of whom were interviewed by a panel comprising Elected Director Susie Venner, fellow Directors Steve Kemish and Priya Samuel, and Steve Pratt from the Members’ Advisory Group (MAG). The panel was convened in accordance with the Code for Sports Governance.

The interviews were also recorded so that other members of the Nominations Committee could feed into the process.

The candidates were evaluated alongside the skills matrix published on our Board page in order to complement and enhance the skills and experience of other Board members.

The three new Directors officially begin their four-year terms tomorrow but all three are attending today’s Board meeting as observers.

Of the three, Emma Vickers perhaps needs the least introduction to our members, having been involved in the sport for more than 20 years. She is a senior England international and has coached in the performance pathway. She is currently National Lead for Research at the Talented Athlete Scholarship Scheme (TASS).

Emma said: “I’m very pleased to have been chosen to become a member of the Table Tennis England board. Table tennis is a sport I have dedicated over 20 years to and have had an active role in from club to international level as both a player and a coach.

“I am passionate about having a role that helps drive engagement in the sport and creates new opportunities for players at all levels of the game, with a particular interest in the development and engagement of female players. I hope to use the expertise I have developed in my professional career to have a lasting impact on the sport.”

Kwadjo Adjepong is a qualified lawyer of more than 20 years’ standing and has a strong background in ethics and governance. Among his current roles he is an Arbitrator Judge at the Court of Arbitration for Sport (CAS). He also has non-executive roles with the Football Association, Premier League, UK Sport, LTA and UK Athletics.

He said: “I am thrilled to be joining the Board to support the great work being done in table tennis.  I believe that table tennis has a great deal to offer at both grassroots and elite level.

“It is an incredibly important time for the sport and I am looking forward to working with the rest of the Board as it engages with the wider table tennis community to achieve its strategic objectives.”

A table tennis player for more than 30 years, he has played in a number of local leagues, including Brighton and Haywards Heath, as well as national tournaments. He is Head of Marketing at Brighton Table Tennis Club.

He said: “I’m truly delighted and excited to be joining Table Tennis England as a Non-Executive Director and look forward to adding my experience to an already strong and diverse board.”

Table Tennis England Chairman Sandra Deaton said: “All the candidates were very good and this was not an easy decision.

“The three successful candidates were all delighted to be appointed and will bring different and important skills to the Board. I wish them all a warm welcome and look forward to working together.”

The three Directors standing down have all played important roles during their terms of office. Doug Livingstone chaired the Finance Committee, while Mark Quartermaine chaired the Governance Committee and was part of the Board group which monitored the progress of the Independent Review Panel which led to the introduction of the Members’ Advisory Group. Dee Paterson brought with her experience and knowledge of elite sports performance from another sport, canoeing.

Sandra Deaton added: “I’d like to thank Dee, Doug and Mark for their contributions over the past four years. They have all taken on additional roles with other organisations which are more time consuming for them and therefore are stepping aside. I wish them all the best for the future.”

Click here to read more about all our Board members.