Thousands of people flocked to the tables as the sixth annual #TableTennisDay got people playing up and down the country. 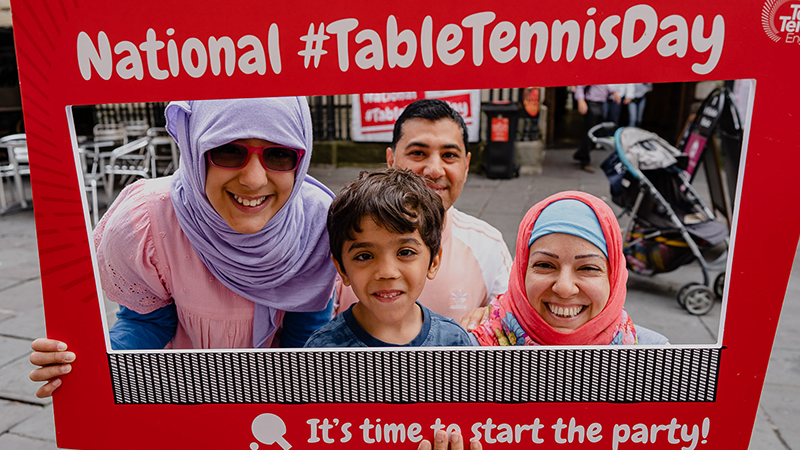 Thousands of people flocked to the tables as the sixth annual #TableTennisDay got people playing up and down the country.

With clubs, schools, shopping centres, workplaces and community groups joining the party, it was a busy day in every corner of England.

And as if the day was not exciting enough, our TT Kidz initiative aimed at providing a fun introduction to the sport for 7-to-11-year-olds was launched at Chester Park Junior School in Bristol, with Maria and Louis again on hand to inspire 100 youngsters taking part.

There was even a message from the England women’s team at the Commonwealth Championships in India, where they will be going for a medal today!

England’s women took time out from the Commonwealth Championships to record a greeting on #TableTennisDay – they then won all their matches to reach the semi-finals! Report on the website later! pic.twitter.com/JvUQYTatOG

Here is just a flavour of some of the events which took place thanks to all those who tweeted or sent us photos. You can send photos to [email protected] or post on social media using the hashtag #TableTennisDay

Its #TableTennisDay here at @LifeRooms_MC #Bootle – come down all day for a game. Between 12 & 2 we will be having a #BigBrew event – so come down for a free brew. We will also have a tournament and games during the #BigBrew event. Who needs Wimbledon hey?? pic.twitter.com/tVx9gK3RZM

A delegation from Kashmir drop in to #tabletennisday in Oxford Town Hall pic.twitter.com/9wu2KnLZLI

It’s national #TableTennisDay and a grudge match is kicking off between our two independent living developments! pic.twitter.com/JHNqwYA677

Happy National #TableTennisDay! 🏓🏓🏓 Here, in The Prezenter office, we’re celebrating with a team tournament! Any excuse to get a game in! 😀 🏓🏓 pic.twitter.com/OLbDm8aOjH

Fun in Nottingham with @GOGANottm today for #tabletennisday. First time Ivan & friend had played today, what a day to choose! pic.twitter.com/uU6B07m8FJ

To celebrate national #TableTennisDay here in the Hub, some of our docs replaced their stethoscopes for ping pong bats 🏓 @MerseysideSport #Trainingfortheallamericantriptochina pic.twitter.com/iY2cm2zPxQ

Amazing event for #TableTennisDay at @Highcross well over 100 players, thanks for volunteers and everyone who supported this event! @AimStrongSport @Chalky987 @ping_tweets pic.twitter.com/EE0tsekz2q

It’s #TableTennisDay today at the club and our 50+ group had a great competition @TableTennisENG. Well done to Nick on winning pic.twitter.com/E6C36bUuJf

Yesterday was national #TableTennisDay and our Staff have enjoyed a week of competitive fun to celebrate! @TableTennisENG pic.twitter.com/YZCrvurfCU