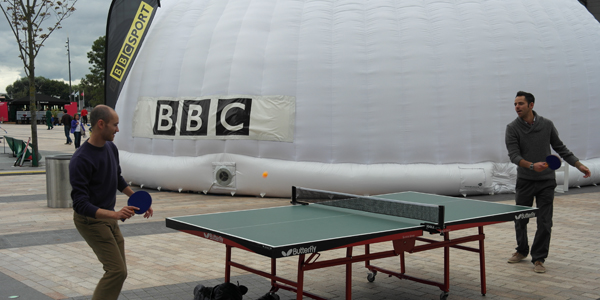 The BBC’s ‘Get Inspired’ campaign recently hosted the Family Sport Festival at MediaCity Headquarters in Salford where table tennis proved extremely popular among members of the public.

The BBC’s ‘Get Inspired’ project, formed after Lord Sebastian Coe’s landmark speech: “London 2012 will inspire a generation,” has built on the success of the Olympics last year and took another step forward with the event in Salford on Saturday.

There were 12 sport taster sessions at MediaCityUK with table tennis playing a prominent role as four tables were put to excellent use both outdoors and in a special portable interactive dome. Children and adults tried their hands at a selection of sports to win a ‘Get Inspired’ medal and have their picture taken with the ‘Mobot’.

Tom Browne, ETTA Regional Development Manager for the North West, said: “Events like these are a real opportunity to reach the kids and get them active and involved in a sport that they may not usually come across.

“Table tennis was very popular with people queuing up to play. It’s great that the BBC are on board with helping to promote our sport in the UK and inspiring people to get active.”

Working with the bodies responsible for grassroots sport in the UK, including Sport England, the BBC want to use their platforms and programmes to help encourage the public to have a go at sport.

The BBC would like to thank all of those who attended the event and would like to do more events like this in the future. “It would really help us to get your feedback – so please could you take a couple of minutes to fill out this online survey:http://www.surveymonkey.com/s/2DG3L3V. If you fill out the survey, I will put your name into a draw so you could win 4 free tickets on a BBC Tour of MediaCity” – Steve Rawling, BBC Event Producer

The ETTA would also like to extend a big thank you to Aaron Beech and Graham Clayborough for helping out over the weekend and to Our Lady’s Table Tennis Club for allowing us the use of their equipment.