Superb Drinkhall into the last 32 in Tokyo!

Paul Drinkhall put in a brilliant performance to defeat Robert Gardos 4-1 and move into the third round of the Olympic men’s singles. 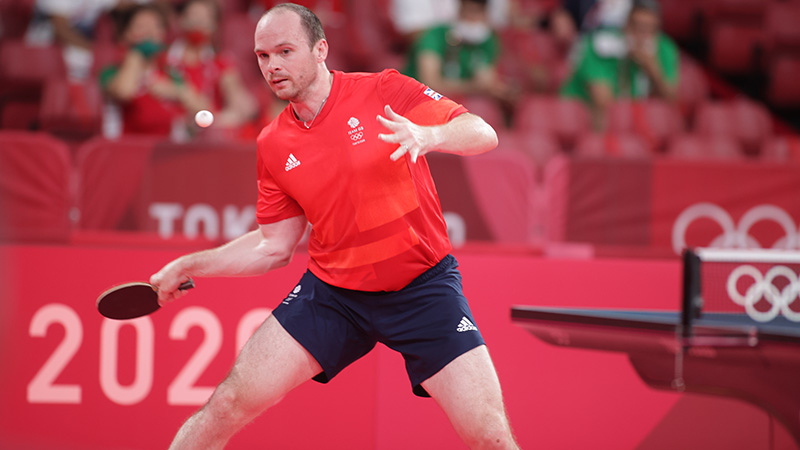 Paul Drinkhall put in a brilliant performance to defeat Robert Gardos 4-1 and move into the third round of the Olympic men’s singles.

Paul had never beaten the Austrian in four previous meetings but he erased that unwanted stat with a confident display of belief, power and precision which left his opponent at times looking at a loss as how to counter the British athlete.

It hadn’t looked so rosy in the first game as a run of six points for Gardos from 2-3 down helped to set up five game points.

But Paul trumped Gardos’ run by string together seven successive points of his own, his trademark forehand flick leading the way, to complete the turnaround and get the first game on the board.

The theme of runs of points continued as Paul, incredibly, found himself looking at a 0-9 deficit in the second, a run only broken when Gardos served long. Again, the tide turned and Paul notched up six in a row – but it was a tall order to complete that comeback and Gardos duly levelled the match 11-6.

And so it continued into the third, Paul putting together a superb set to take it 11-4 – winning nine points from 1-2 down with a string of quite brilliant shots, time and again finding the very corner of the table, off both wings and with both block and drive.

Apart from the first point, Paul always led the fifth. Gardos took his timeout at 1-3 and Paul took his at 5-4 – coach Gavin Evans seeking to nip in the bud a Gardos comeback from 1-5 down. It did the trick and Paul pulled out to 8-5, 9-6 and then the next two points saw it home, taking his first match point with a laser-guided backhand push on to the sideline.

Next up in the third round is South Korea’s Jang Woojin, the ninth seed and world No 12. They have met once before – the last 64 of the 2018 Austrian Open, when Paul suffered a narrow 4-3 defeat.

Paul’s match is scheduled on table 4 at 6.30am UK time on Monday, while Liam is on an hour later on table 3.

Paul said after his momentous victory: “He is a great player and I’ve always struggled with him in the past. I’ve had a couple of close ones but also had a few where I’ve lost easy as well, so very happy to come through a game like that against a player like him.

“It was 4-1 but it certainly wasn’t straightforward. I felt in control for a lot of the match but obviously first set he had a big lead but I kept fighting and managed to win that. It was certainly a very tough match.

“I know that I’m capable of good things and my game, when I get everything together, can challenge the best and that’s what was I was planning for. Not qualifying was a disappointment but now I’m here and performing how I expect and how I train to perform.”