Super Wilson on top of the world

Commonwealth champion Ross Wilson fought back magnificently against the double Paralympic champion from China to take gold in men’s class 8 at the World Para Table Tennis Championships in Slovenia. 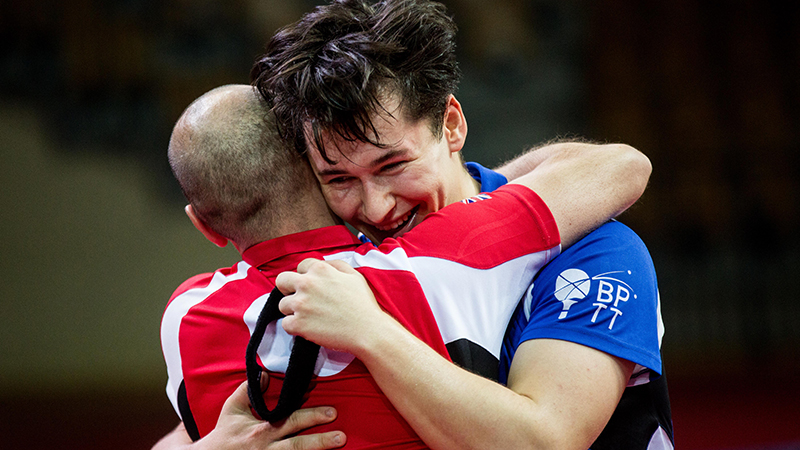 Commonwealth champion Ross Wilson fought back magnificently against the double Paralympic champion from China to take gold in men’s class 8 at the World Para Table Tennis Championships in Slovenia.

Wilson had lost to his semi-final opponent Marcin Skrzynecki from Poland in last year’s European Championships and in the Paralympic Games in Rio but he is a different player this year and apart from the second set when he had to fight back from 10-6 down to take it 13-11 he always looked in control.

In the final against Zhao Shuai, Wilson started positively and edged the first set 12-10. The world No 2 then came back to take the second 11-7 and a very close third 12-10 to lead 2-1. At 7-4 down in the fourth it looked as if Wilson would have to settle for silver but he refused to give up and a brilliant forehand winner brought him level at 8-8. After missing two set points of his own he then saved two match points before clinching the set 14-12.

The final set was pure drama as Zhao again took the early initiative to lead 6-3. At 6-5 the Chinese coach called time out but it worked in Wilson’s favour and he quickly moved to 9-6. Back came Zhou to earn another match point at 10-9 which was saved by Wilson and on the first match point of his own he held his nerve superbly to take the set 14-12 and the gold medal, in doing so avenging defeats by the Chinese player in London and Rio.

“I really can’t believe it,” said an emotional Wilson. “I have been so logical through this whole competition and today I was just trying to focus on my game, what I was doing and how I was going to win points and then all the emotion just came out at the end. It’s incredible.

“I think every game was deuce apart from the second one. He clinched the third at 12-10 but I had chances to win that as well. After that game I just thought I’m going to have to stick in here, just keep going and keep my strategy. I was down in the fourth and the fifth but fortunately I put enough pressure on him to get back in.”

After being hampered for several years by a series of injuries the 23-year-old from Minster, who trains full time with the British team at the English Institute of Sport in Sheffield and was competing in his first World Championship, has finally been able to show his true potential this year but is not looking to rest on his laurels.

He said: “It is just about pushing on now. There is so much room for improvement still and when I get back in the training hall I’ll look at ways to do that. It has been an amazing year from me with the Commonwealths and now this – I really can’t believe it to be honest. I’m going for Tokyo now and that is my main goal.”

Pickard has really come of age in this tournament and she put in another solid performance in the semi-final against the world No 2 and European champion Raisa Chebanika. The 26-year-old from Burnley levelled the match at 1-1 and saved match points in the fourth set before the hugely experienced Russian, who was Paralympic champion in London 2012, secured the set 14-12 and the match 3-1.

“I thought in parts I played really well,” said Pickard, “and things I had been working on in training came off. Obviously there is lots to work on but that is always the case in table tennis.

“I’m disappointed now but I think I’ll look back in time and realise I’ve had some good wins and definitely under the pressure I think I’ve performed quite well. I always believe I can win a match. I can be 10-0 down and I’ll still keep fighting for every point because I believe I can win.

“I’ve got massive motivation now. I’m new to the full time programme and I’m only at 5% of where I want to be and what I believe I’m capable of. I’m not half the player I want to be yet so bring it on. It’s just little tweaks here and there; keep working as hard as I can and I can be the best in the world.”

After his heroic comeback against Federico Falco in the previous round, Matthews faced an even bigger challenge in the form of world No 1 Young Dae Joo. The 26-year-old Welshman started well and took the first set but the greater experience of the Korean, who was the silver medallist in Rio, proved decisive and he took the next three sets and the match 3-1.

“It definitely doesn’t get much tougher than that,” said Matthews. “He is a really good player and he is world number one for a reason. It was a difficult match – I felt that I played well but he was just a bit more consistent on the day.

“It’s been a massive learning experience I’m so happy to come away with a bronze medal although I’m obviously disappointed I couldn’t get another colour. This is my first World Championships and I’ve got a medal so I’m over the moon but a bit disappointed at the moment.

“I haven’t played much on a show court before so it was really good to go out there today in front of the lights and the crowd. I’ll just take the experience from it now and look back on it with my coach and see what we can do differently and hopefully come out with the win next time.

“I took a set off the world number one at the World Championships and it gives me massive confidence and the experience I need now. I want to go all the way in every tournament – that is what I am fighting for. I want that gold medal around my neck and I’m just going to go back and work harder than ever and hopefully next time I can come back with that gold medal.”