Stockdale and Perry on podium 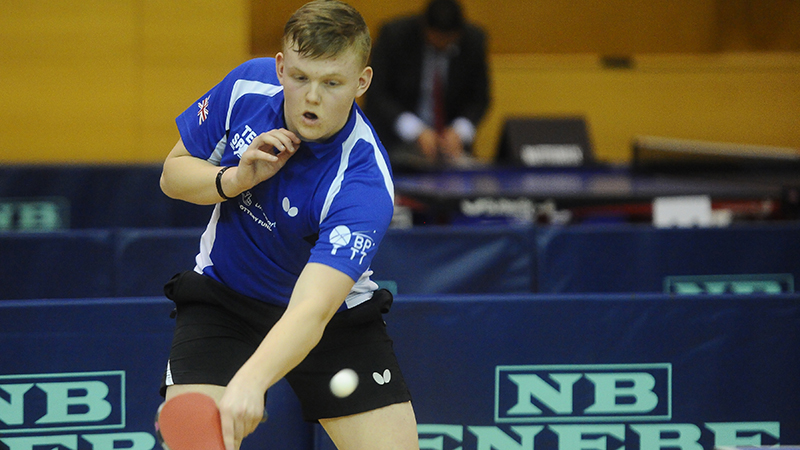 Perry began with a 3-1 win over the Spaniard Francisco Rodriguez and then came back from 2-0 down to beat the American world No 13 Ian Seidenfeld 11-8 in the fifth before securing top position in the group with a 3-0 win against Petr Hnizdo from Czech Republic.

The 24-year-old from Paisley was a comfortable 3-0 winner of his quarter-final against the Italian Matteo Parenzan and pushed the world No 1 Alvaro Valera all the way in their semi-final which the Spaniard won 3-1.

“I feel like I’ve had a very mature head these past two weeks,” said Perry, who won singles bronze and team gold in Italy last week and is self-funding to compete in Spain. “I’ve tried to be as disciplined as possible with my game plans and I feel it has really paid off.

“I’ve had some really good wins and some improved performances from Italy and my match with Valera was incredibly tight. He’s such a clever and experienced player who I have nothing but respect for and I think my coaching team and I approached the match with the correct tactics; it just wasn’t to be today.

“I’m really happy to have won singles bronze medals in Spain and Italy and I just want to thank everyone – UK Sport, BPTT and individual sponsors – for their support. It’s great to start the season so well and I’m really looking forward to what lies ahead.”

In the group stages Stockdale put up a good fight in the first two sets against the former world champion and world No 1 Jose Ruiz Reyes before the Spaniard pulled away in the third for a 3-0 win. After a 3-1 win against Jagannath Mukherjee from India the 18-year-old from Romford came out on top in a titanic battle against Angel Garrido from Spain 15-13 in the fifth. That took him through to the quarter-finals where he beat another Spaniard Ander Cepas 3-1 and he lost nothing in defeat to Jorge Cardona, the Spanish world No 11 in three close sets the semi-final.

“I’m very happy to have got to the semi-finals,” said Stockdale, “especially getting out of a group with two higher ranked players. I had several chances against Cardona that I didn’t take so there are improvements to be made but it is a nice feeling to get a medal. Overall I’m very happy with the progress I’ve made and how I played.”

Alex Bland won his first match in men’s class 7 in four close sets against Pablo Romero Parreno from Spain and was far from disgraced against Katsuyoshi Yagi, taking the third set 12-10 before the Japanese world No 8 clinched the match 12-10 in the fourth. The teenager from Rotherham took second place in the group with a 3-0 win against Rasmus Hensen from Denmark and lost in the quarter-final to the Paralaympic silver medallist Israel Pereira Stroh from Brazil 3-0.

In men’s class 5 Cellan Hall won one of his three group matches 3-0 against Hakon Bjarkason from Iceland and fought back really well from 2-0 down against the Korean Kyung Young Kim before losing the fifth set 11-7. A 3-0 defeat to the world No 10 Bart Brands from Netherlands meant that the Welsh champion finished third in his group.

Scotland’s Ryan Henry also recorded a win in his men’s class 8 group, 3-1 against the Spaniard Ricard Sabio Ruiz but failed to progress after losses to the Canadian Ian Kent 3-0 and Roy Van Der Burg from Netherlands 3-1.

The full British Squad for the Costa Brava Open is: