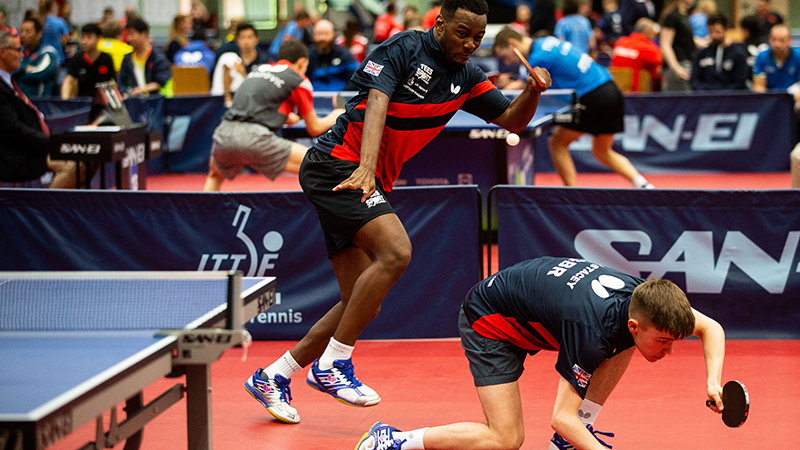 Hunter-Spivey and his regular team partner Urhaug, the former world and Paralympic champion, came through their semi-final against China 2-0. They won a close doubles match 3-2 and Hunter-Spivey, who celebrated his 24th birthday today, won the tie with a 3-0 defeat of the 2017 Asian champion Zhan Dashun.

Against Germany in the final they lost the doubles 3-0 to the class 3 world No 1 Thomas Schmidberger and former class 5 world champion Valentin Baus and had to be content with silver when the talented Schmidberger beat Urhaug 3-0.

“It’s always a pleasure playing with Tommy,” said Hunter-Spivey, “and it’s great to get to the final of such a strong competition. I feel that I’ve played very well this week; I’ve been training hard and I’m starting to see the rewards. Beating Baus in the singles event is a great win for me as he is a great player and now I’m showing that I’m on the same level as the top players in the world.

“Overall I’m really happy with my performance and a big win over China in the team event on my birthday makes it even more special.”

In their semi-final against Italy, Daybell and 18 year old world No 5 Radovic combined well in the doubles to beat the class 9 world No 4 Mohamed Kalem and 19 year old Lorenzo Cordua 3-0. Radovic then secured his team’s place in the final with a 3-1 win against Cordua.

Against the French team of Mateo Boheas and Gilles De La Bourdonnaye, Daybell and Radovic were just edged out in the doubles 13-11 in the fifth and De La Bourdonnaye, the former Paralympic, World and European champion who is competing for the first time since the Beijing Paralympic Games in 2008, beat Radovic 3-2 in the first singles match to secure the gold for France.

“I think we played good doubles considering we have never played together before,” said Daybell. “We could have nicked the doubles in the final and Filip was unlucky not win his singles.

“I’m pleased with the way I’ve played this week although my results could have been better in the singles. As it is qualification year for Tokyo everyone is playing at a very high level and the margins are very tight – playing anyone in the top 15 you know you it is going to be a battle. It was a shame that I lost a very close quarter-final but I can take a lot of positives. I’m playing at the level required so hopefully I can turn that into victories.”

Sue Gilroy and Megan Shackleton have played some good doubles matches here and in their semi-final they pushed the Paralympic champions from China, world No 2 Zhou Ying and No 5 Gu Xiaodan, despite a 3-1 loss. Gilroy was beaten 3-0 by former double world and Paralympic champion Zhou but it was still a promising performance by the British pair ahead of the European Championships later this year.

“I’m really pleased to be coming away with a bronze medal at such a competitive tournament,” said Shackleton. “I feel that Sue and I really pushed the best in the world and we can take confidence from that going into the major championships to come.”

“I knew I was way below the standard I normally am,” said Gilroy, who has only been back in training a short time after surgery to her shoulder, “so winning a bronze in team is fantastic. The standard is so high and if you are not playing at your best then you are going to find it very difficult to compete against the best players in the world. I am definitely short of match play so lots to work on when I get home.

“We played really well in doubles – probably the best we have played as a team so I’m really pleased with our standard. Although I lost 3-0 against Zhou I feel it was the best I played all tournament and at the top of my game I could have been challenging her much more strongly. So it was a very positive start to the year and I’m hoping for continued success in my next tournaments.”

Will Bayley joined forces with his old rival Jochen Wollmert, the three-time Paralympic champion from Germany, in the team event here and they reached the semi-finals to play Yan Shuo, the 23 year old world No 1, and former Asian champion Liao Keli from China. After losing the doubles in five sets Bayley levelled the tie by beating Liao 3-0 but Yan took China into the final with a 3-0 win against Wollmert.

“It was awesome playing with Jochen,” said Bayley. “He was really amazing to play with and I feel that I have learned a lot. My level is probably as good as it’s ever been in my whole career so I’m happy for that.”

With world champion Wilson again rested, McKibbin and Shilton took on the Paralympic team champions from Ukraine and were beaten 3-0 in the doubles by world No 1 Viktor Didukh and No 4 Ivan Mai. After his superb win against the Rio bronze medallist Piotr Grudzien from Poland yesterday, Shilton put up another good performance against Didukh but the former world champion was just too strong and he took the match 3-1 and the tie for Ukraine 2-0.

“It’s been a really good event for me,” said Shilton. “I’ve really enjoyed playing with Ross and Aaron and I was really pleased to have beaten Grudzien as that is the first time I have won against him after I’ve had a lot of chances before. I feel that I am slowly getting up to the level I’ve been looking for and I’m looking forward to playing in Poland at the end of the month.”

“The team event has gone well,” said McKibbin. “It was nice to play with Billy in the doubles – I think he brings something different to our team which makes us stronger and gives us more options. We had great wins against Hungary and Poland – I was really happy for Billy to get the win to finish if off for us against Poland as it’s a great win for him and good for his confidence.

“Personally it’s been one of my best competitions overall – I have only lost in singles to the double Paralympic champion and I’ll look to continue this good work in the next few weeks and hopefully carry on the performances in Poland.”

Facey Thompson and Stacey came through a nail-biting doubles match against the world team silver medallists from Japan 13-11 in the fifth after Koyo Iwabuchi and Nobuyuki Suzuki had saved six match points. World No 8t Iwabuchi took bronze in the World Championships last year and he levelled with tie with a 3-1 win against Stacey, 12-10 in the fourth. That left Facey Thompson to play Suzuki in the deciding singles but the 24 year old Londoner could not find his best form and was beaten 3-1.

“Josh and I played well in the doubles but sadly I did not play well in the singles,” said a disappointed Facey Thompson. “I haven’t played well at all this tournament and didn’t really trust my game at all. But I will go back home, train hard and hope to improve for the Polish Open later this month.”

“I really enjoyed playing with Ash,” said Stacey, “it was a really positive event for both of us and we were unlucky not to have managed to win the semi-final. It was nice to play a team event in our own class just to test ourselves against the best and see where our level is. I think as a whole I’ve put myself in a good position to push into the top 10 in the world. Beating Perez and losing a close match in the semi-final of the singles to Kalem shows my level of match play is rising and what I’m doing in the training hall is working.”

Fliss Pickard and Milijana Cirkovic from Montenegro lost a tight doubles match in their final round-robin tie against the Swedish team of Emelie Endre and Caisa Stadler 3-2 and Endre then beat Cirkovic to secure the win for Sweden.