Siraj and Wong star at anniversary 4*

Shayan Siraj of Yorkshire and Jasmin Wong of Yorkshire were the winners of the Junior Singles Events at the FAST Fund 4 Star Junior Championship at Middlesbrough Sports Village. 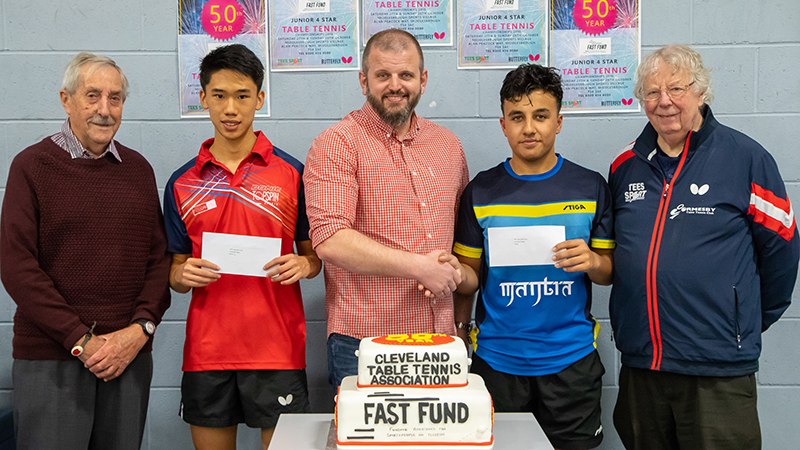 Shayan Siraj of Yorkshire and Jasmin Wong of Yorkshire were the winners of the Junior Singles Events at the FAST Fund 4 Star Junior Championship at Middlesbrough Sports Village last weekend.

The Cleveland Association celebrated the 50th year of the Championship with a new sponsor FAST Fund, who are the sports arm of the local charity Middlesbrough and Teesside Philanthropic Foundation, at a new venue, Middlesbrough Sports Village, which produced an excellent setting for the Championship.

The Boys’ Singles was won by top seed Yorkshire’s Shayan Siraj, but not without a major battle in the final where he defeated Joseph Hee of Kent over five very close games. Siraj beat Sam Wilson of Northamptonshire in the semi-final after Wilson had won a titanic battle against Cleveland’s Joe Cope in the quarters, winning both the fourth and fifth games by just two points.

Hee reached the final with a 3-1 victory over Durham’s Josh Weatherby in the semi and Sam Chesterman in the quarters.

The Girls’ Singles was won by Jasmin Wong of Yorkshire who beat Millie Rogove from Hertfordshire by 3-1 in the semi and the 13-year-old Portuguese player, Raquel Sao Pedro, by the same score in the final. Pedro came from an unseeded position to reach the final with victory over Ruby Chan at 11-9 in the fifth in the quarter-sinals and by 3-1 against Tiana Dennison in the semi.

The Cadet Boys’ Singles produced another tremendous final as Ben Hee of Kent beat Louis Price from Avon 11-9 in the fifth. Hee beat Durham’s Thomas Rayner 3-1 in the semis while Price had another marathon against Nottingham’s Connor Green in the other semi-finals, winning 11-8 in the decider after Green had won an equally close match against Cleveland’s Ben Piggott in the quarters.

The Cadet Girls’ Singles was won by Ruby Chan from Yorkshire who beat Millie Rogove from Hertfordshire by 3-1 in the final. Chan’s toughest match was against the Junior Girls runner-up, Raquel Sao Pedro, by 14-12 in the decider in the semi-final. Rogove came through against Nottingham’s Erin Green in straight games in her semi.

The Under-13 Boys’ winner was Connor Green who won the title without the loss of a single game in the final, beating Lennon Maughan-Staves from Yorkshire in three games.

Anna Green made it a Green double when she won the Under-13 Girls’ Singles with a 3-1 victory over Isabelle Lacorte from Hertfordshire in the final, having beaten Katie Bates of Cleveland by the same score in the semi.

The Boys’ Grade 1 was won by Martin Johnson from Scotland who scored a comfortable victory in the final against Robert Pelc of Surrey. The Girls’ event was won by Helena Dicken of Derby who beat Federica Bonato of Surrey in straight games.

In the team event, the Ormesby Boys A Team made up of Joe Cope and Shayan Siraj beat Fusion in the final by 3-1 after Joseph Hee had beaten Siraj 12-10 in the opening match. Cope beat Ben Hee at 11-8 in the decider before Ormesby went on to win the doubles and Siraj beat Ben Hee in straight games.

The Junior Girls’ Team event was won by Kingfisher who beat Fusion 3-1 in the final. Tiana Dennison beat Darcie Proud to give Fusion their only victory while Ruby Chan won two for Kingfisher.

In the Cadet Boys’ Team event the Ormesby team of Thomas Rayner and Ben Piggott were comfortable winners against St Mary’s Hull I by 3-0.

The Cadet Girls’ Team was won by Draycott when Helena Dicken and Lucy Vernon beat Ormesby 3-0 in a comfortable match.

The prizes were presented by Dave Roebuck, a Patron of the Middlesbrough and Teesside Philanthropic Foundation, together with the Chairman of the Cleveland Tennis Association, Colin Davidson and the President Alan Ransome.

The centre of attraction at the presentation ceremony was a special cake which was provided to celebrate the 50th year of the Championship. At the end of the presentations the cake was cut by David Roebuck. All of the competitors, parents, coaches and officials who were present were able to join the Association sharing a piece of the delicious cake.