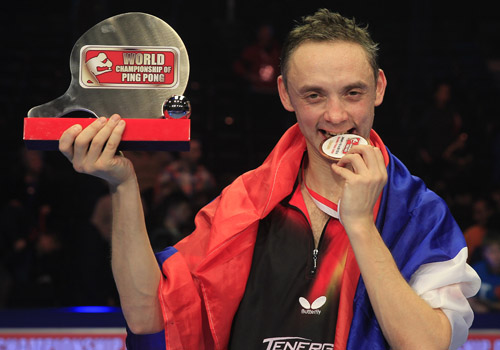 Maxim Shmyrev (RUS) completed a hat-trick of titles from the World Championship of Ping Pong after another thrilling weekend of action from Alexandra Palace, London.

The Russian, who won the title in Las Vegas 2011 before also emerging victorious from the inaugural tournament at ‘Ally Pally’ last year, was dominant on the table once again as he raced to yet more success under the Sky Sports cameras.

His superior speed and table prowess helped him to see off American, and former Olympic Doubles silver medalist, Ilija Lupulesku 3-0 (15-8, 15-7, 15-12) in the final to secure his unprecedented treble.

After receiving the $20,000 first prize, Shmyrev said: “I am delighted! I had hoped I could defend my title again and it was really difficult this year. I am often fighting with myself in my life and this was a new challenge for me, the level of players this year was higher than last year and a lot of players are playing very, very well.”

The triple Champion also mentioned how much he is looking forward to returning to London, especially in front of the boisterous 600+ crowd at Alexandra Palace: “I hope to be back to defend the title next year. I love London and I love sandpaper ping pong.” 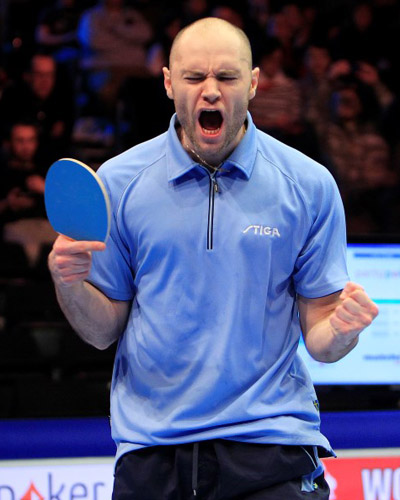 It wasn’t all about the Russian at the weekend though as a quartet of British players made the quarter-finals, with former English international, Andrew Rushton, picking up a cool $5,000 for making the semi-finals where he lost to Lupulesku 2-0 (15-6, 15-10).

There was also success for Chris Doran and Andrew Baggaley, who both made the last eight, while Scotsman and Grand Prix regular, Gavin Rumgay, proved a tough opponent for Shmyrev before falling to a 2-1 (15-12, 12-15, 15-5) quarter-final defeat.