A second win in three weeks for 19 year old Josh Stacey over the Spanish world No 3 Juan Perez Gonzalez was one of the highlights for the British team on day one at the ITTF Para Polish Open in Wladyslawowo as seven players progressed from their singles groups. 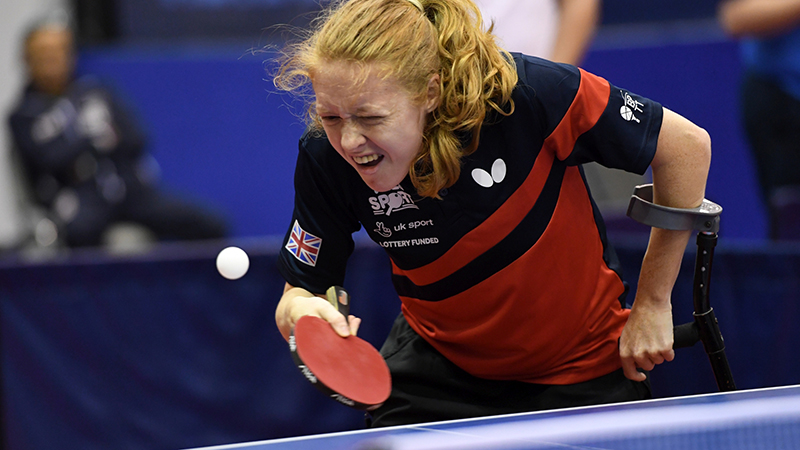 A second win in three weeks for 19 year old Josh Stacey over the Spanish world No 3 Juan Perez Gonzalez was one of the highlights for the British team on day one at the ITTF Para Polish Open in Wladyslawowo.

Women’s class 6: Fliss Pickard was a comfortable 3-0 winner against Darya Paluyan, the 21 year old from Belarus who was making her international debut, and then came through a great battle against Gabriela Constantin, fighting back from 2-0 down to beat the Romanian 3-2 and progress to the knockout stages as the winner of her group. She will play Emelie Endre from Sweden in the quarter-finals.

Men’s class 6: Bobi Simion took gold in men’s class 6 the last time this tournament was staged 10 years ago and the Romanian world No 5 showed he is determined to take the title again with a 3-1 win against Perry. A 3-1 win in his second match against 17 year old Ignacio Torres Orostica, the Pan-American bronze medallist from Chile, took Perry through to the quarter-finals where he will play another Chilean Matias Pino Lorca.

Men’s class 8: Shilton won his first match 3-0 against the 21 year old Romanian Robert Boroleanu but then found former world champion Richard Csejtey too strong and the Slovakian was a 3-0 winner. Shilton went through to the knockout stages with a 3-0 win in his final group match against 19 year old Devin Wassink from Netherlands and in the last 16 against the Italian Samuel De Chiara he defeated the European team silver medallist 3-0 to set up a quarter-final against top seed and London 2012 bronze medallist Emil Andersson from Sweden.

McKibbin began with a comfortable 3-0 win against Curtis Caron, the Pan-American team gold medallist from Canada and followed that with a 3-1 win against Marc Ledoux, the former world No 1 from Belgium. He secured first place in his group with a 3-0 win against 23 year old Steffen Salomonsen from Norway and a 3-0 win in the last 16 against Lam Ka Wai from Hong Kong took him through to the quarter-finals where he will play Piotr Grudzien, the Paralympic bronze medallist from Rio.

Men’s class 9: Stacey had beaten world No 3 Juan Perez Gonzalez from Spain in Slovenia earlier this month and he repeated that victory in his first match, beating the very experienced World Championships bronze medallist 3-0. A second 3-0 win against the former European team bronze medallist from Poland, Pawel Konstantyn, sent Stacey through to the knockout stages as group winner and he received a bye into the semi-finals.

Facey Thompson was beaten 3-0 by the Rio bronze medallist Mohamed Kalem from Italy but secured his place in the knockout stages with a 3-0 win against the Polish world team gold medallist Pawel Jablonski and he will play Perez Gonzalez in the quarter-finals.

Men’s class 10: Kim Daybell dropped the first set to Igor Misztal from Poland 13-11 but came back to beat the world and European team gold medallist 3-1. He lost in three close sets to Bas Hergelink, the 22 year old world No 11 from Netherlands but progressed from his group with a 3-0 win against Gilles De La Bourdonnaye from France, the former Paralympic, world and European champion. Daybell plays another Frenchman in the quarter-final, the 22 year old World team bronze medallist Mateo Boheas.

Women’s class 4: Megan Shackleton could not have had a more difficult start to her women’s class 4 singles competition than a match against World and Paralympic champion Borislava Peric-Rankovic and the Serbian world No 1 was in ruthless form in a 3-0 win. She started well in her second match against Fatmeh Al Azzam but the experienced Paralympic and World team medallist from Jordan came back from 2-0 down to take the match 11-9 in the fifth. Shackleton fought hard in her final match against 21 year old Aleksandra Vasileva, leading 2-1 before the European team silver medallist from Russia recovered to win the match 3-2, 11-7 in the fifth.