England’s men recorded another sensational performance at the ITTF World Cup to guarantee themselves a bronze medal with a nerve-wracking victory over Brazil at the Copper Box. 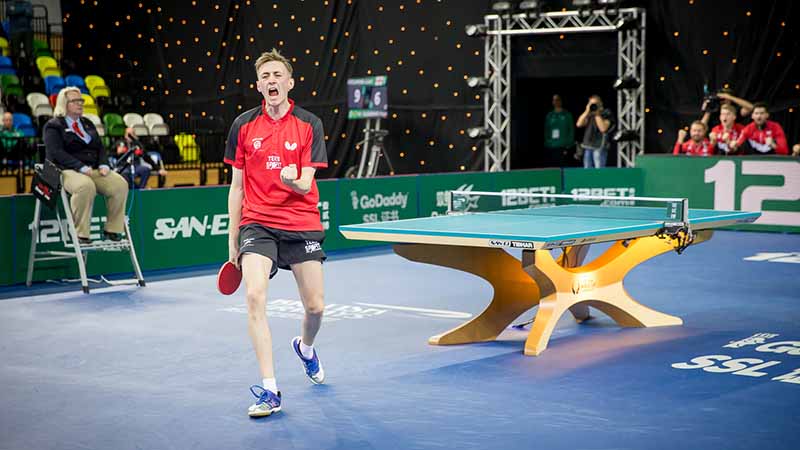 England’s men recorded another sensational performance at the ITTF World Cup to guarantee themselves a bronze medal with a nerve-wracking victory over Brazil at the Copper Box.

The team were inspired by Liam Pitchford once again – a day after he defeated world no.11 Tomokazu Harimoto, he dominated world no.16 Hugo Calderano to give England a 2-0 lead before sealing the deal against Eric Jouti in the fourth rubber.

England started with their top ranked duo of Paul Drinkhall and Sam Walker against Brazil’s Eric Jouti and Gustavo Tsuboi, and the early signs were not good. Brazil took the first 11-5, and there are grim faces on the England bench as they doubled the lead 11-7.

But when the going got tough the crowd got going and the English woke up and smelt the coffee.
From two games down they clawed their way back winning the third 11-4. and a cagey fourth 11-7.

With momentum on their side Drinkhall and Walker led from the off in the decider and duly gave the hosts a 1-0 lead 11-5. An important point given the presence of the game’s highest ranked player, Calderano, up next for Brazil.

Up stepped Pitchford, world number 85, but you might’ve been forgiven for thinking it was the other way round as the in-form Englishman easily read and dominated Calderano’s serve early on. Proving his demolition of Harimoto on Thursday wasn’t a fluke, he completed a stunning straight sets win with two 11-6 games to leave the crowd at fever pitch.

All avenues pointed towards an England win and a place in the semi-finals, especially when a super-charged Drinkhall rushed to a two games lead, but with the finishing line in sight he couldn’t quite finish the job. From 10-6 down he saved seven game points but couldn’t force a match point of his own as Tsuboi pulled one back.

From then the worried frowns returned to the English bench as Tsuboi slowed clawed his way back and agonisingly won 3-2, cutting England’s lead to 2-1 overall.

Pressure was then on Lion-heart Liam, knowing Calderano awaited Sam Walker in the fifth match as heavy favourite, and he started nervously, dropping the first game to the now pumped Brazilians 11-6.

A more positive approach from Pitchford saw him secure the second game and then slowly draw himself ahead in the tie, finally forcing a match point at 10-9 in the fourth. He had just the one opportunity and took it, a long forehand rally ensued, with Pitchford forcing Jouti wide of the table – ensue the rapturous applause.

Bat on the floor, arms raised in the air, Pitchford painting ever the picture of a champion after another champion performance.

He was ecstatic with his performance: “I’m over the moon. I’ve been working smarter recently, with psychologists and one-to-one with the coaches, working on small things in my game that I needed to make the step up.

“It’s been up and down but now I feel I’m flourishing. I can’t really explain it, I’m just playing well and enjoying the moment.

“I’ve been under pressure in a couple of matches but managed to come through them – before, that wasn’t happening but now I’m stepping up.

“We’ve got to approach the semi-final against China the same way we would against anyone else. We put them under pressure at the Olympics and we weren’t that far away.”

The quarter-final win secured England a bronze medal, just as they had done in 2016 at the World Team Championships, and this time a semi-final fixture with China on Saturday morning. With nothing to lose, they could just find everything to win.

Drinkhall concluded: “You’re waiting for the draw, and it was a good draw and we took advantage of that. Obviously now we’ve got China and what a great place to play them, in London, with a young team. Who knows what could happen?”

When the quarter-final draw presented China with Germany it was hoped to be one of the matches of the tournament. However, Germany were without world no.1 Dimitrij Ovtcharov, absent from an apparent hip injury.
Instead Germany had to rely on their remaining team members, starting with Benedikt Duda and Patrick Franziska in the doubles. What happened was China showed their class through Xu Xin and Fan Zhendong to ease home 3-0 – it was a sign of things to come.

After that defender Ruwen Filus battled hard against Ma Long but succumbed by the same scoreline and finally Duda returned to the table, only to lose 3-0 to Xu Xin.

Elsewhere, South Korea and Japan both had to endure matches that went the full distance before their place in the semi-finals was assured.

Both sides were indebted to starting quickly and winning the doubles to forward their campaign. For Korea both Jeoung Youngsik and Jeong Sangeun won their doubles match and a singles fixture against France, while Japan’s Jin Ueda won a doubles and a singles encounter to help them over the line against Hong Kong.