Table tennis will be showcased to new audiences around the world thanks to a partnership between Table Tennis England and Recast – generating income to reinvest in the grassroots of the sport. 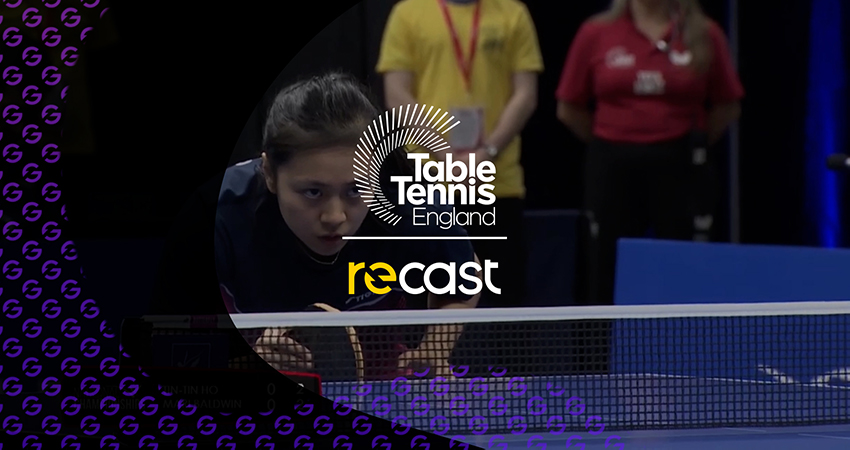 Table tennis will be showcased to new audiences around the world thanks to a partnership between Table Tennis England and Recast – generating income to reinvest in the grassroots of the sport.

Table Tennis England is one of the first organisations to partner with Recast, joining the likes of Champions League finalists Manchester City and golf’s European Tour.

Recast is a multi-sport, subscription-free app which provides dynamic content including live sport, highlights and behind-the-scenes footage, to supporters.

By watching that footage, supporters help to generate income for rights-holders or content creators such as Table Tennis England, at no cost to themselves.

Table tennis clubs and individual athletes will also be able to share their own content – such as live streams of matches – and generate income and in turn raise the profile of the sport.

Those who use the app earn in-app credits by simply signing up, watching adverts, sharing content and inviting friends. They can watch their favourite footage for free, while creating credits which can be ‘cashed out’ by Table Tennis England.

Recast, which has attracted millions in finance from investors, enters the market at a time where there is a recognised need for change to the current sports viewing model after years of fans increasingly turning to online feeds and illegal streams, or watching short clips and highlights rather than the full event. These trends have been accelerated due to Covid-19.

Fans are looking for affordable access to sport and rights-holders are looking to explore new ways to unlock value for those rights. Recast rewards fans for their engagement on the platform, which in turn generates value for the content publisher, meaning fans can now watch content knowing the value generated is going directly to the sport or organisation they support.

Recast, which aims ultimately to be a global platform, is currently in an open Beta testing phase ahead of a full UK launch later this year, and fans can become part of the community at www.recast.app

Table Tennis England will be trialling footage on the platform in the coming weeks – keep an eye on our website and social media channels for more information.

Table Tennis England Chief Executive Sara Sutcliffe said: “We are delighted to have this opportunity to work with Recast to develop their exciting platform from the early stages.

“The digital landscape for sports broadcasting is evolving quickly and Table Tennis England is determined to keep up with the times and to provide extra value for current supporters and attract new audiences to our sport by exploring new ways to broadcast and stream content.”