English no.1 junior Tin-Tin Ho make the quarter-finals at the ISF World Schools’ Championships in Clermont-Ferrand, France after the individual events brought a close to the week-long competition.

Although she was eventually stopped by Chinese Taipei’s Chiu Ssu-Hua 3-0 (11-9, 11-8, 11-9), the English youngster had already made her mark in the heart of France. 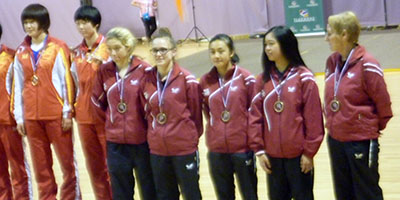 The players had returned to action following a rest day during which the teams had been treated to a sightseeing tour of Vulcania before attending a cultural evening where England (led by Emma Torkington) won rapturous applause for their vocal performance.

Seventy one boys and seventy four girls started the day playing in groups of 4, with first and second places moving on to the knockout stages and those eliminated entering a friendship doubles competition.

In the boys’ singles, five of the eight English entrants advanced through their groups. Group winners Tom Jarvis and Helshan Weerasinghe were joined by runners-up Omar Khassal, Marcus Giles and Danny Lawrence – the latter finishing behind European no.1 David Reitspies.

The three other boys who failed to make the knockouts (Charlie Austen, Karim Khassal and Gabriel Achampong) moved into the friendship doubles later in the day.

For the five boys left in the knockout rounds the tasks became ever more difficult and no individual managed to make it to the last 16.

Both Lawrence (who lost 3-0 to Chi Yuanrui, CHN) and Omar Khassal (who lost 3-0 to Marcus Giles, ENG) were eliminated in the preliminary round, while Giles, Weerasinghe and Jarvis were all beaten in the first round.

The numbers were reversed in the girls’ singles as only three made progress through the group stages – Tin-Tin, who won group 15, was joined by Maria Tsaptsinos and Yuki Wat, who were both runner-ups.

Unfortunately, the remaining five girls didn’t make it through with Amy Webster, Katie Barlow, Eleanor Davidson, Hannah Clark and Emma Torkington having to settle for the friendship doubles.

However, the competition became to fierce in the first round for both Tsaptinos (who lost 3-0 to Shiting Chen, CHN) and Wat (who lost 3-0 to Qi Fenjie, CHN) who were left to support Tin-Tin on her run to an eventual quarter-final berth.

Reports from days 1, 2 and 3 of the ISF World Champs can be found here.