Sue Bailey, David Wetherill, Paul Karabardak and defending champion Will Bayley will total no fewer than 18 Paralympic appearances between them when they compete in Tokyo. 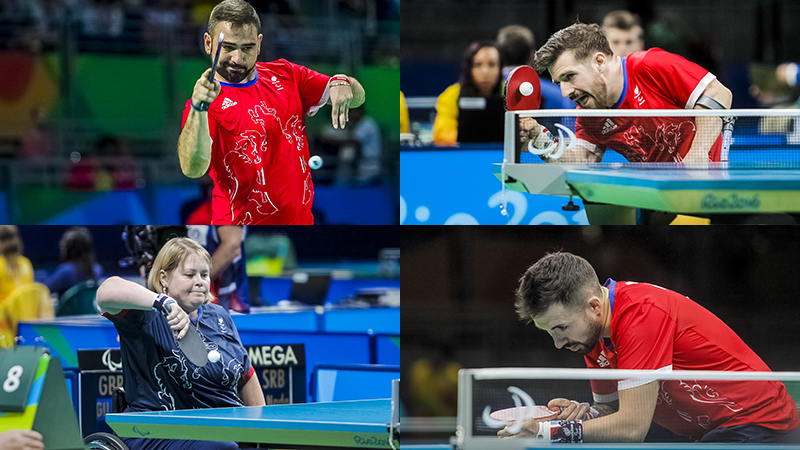 Sue Bailey is dedicating her sixth Paralympic Games appearance to her parents and says competing under her maiden name will make her so proud.

READ: Debutants excited to take Paralympic stage | Plus – more previews and news from Tokyo next week

Most people will know the ParalympicsGB athlete as Sue Gilroy MBE, but she has reverted to her maiden name as she adds Tokyo to a list of Paralympic appearances which stretches back to Sydney 2000 – every edition of the Games this century.

Bailey, also a double Commonwealth Gamed gold medallist from 2002 and 2006, will compete in the women’s Class 4 singles and the Class 4-5 team events in Tokyo.

The 48-year-old from Barnsley said: “I am extremely proud to have qualified for my sixth Paralympic Games and to be representing GB again after such a difficult few years. It makes it even more special to have qualified by winning the first ever World Qualification Tournament in Slovenia.

“This will be my first ever tournament that I will compete in under my maiden name of Bailey which will make me so proud in honour of my dad and I hope to do him justice in Tokyo. I owe him and my mum so much as they got me into table tennis and have supported me so much throughout my career, along with my children Ryan and Lauren, my partner Scott and all my family and friends.

“Winning a Paralympic medal would mean so much to me as it is the only medal I haven’t won over my career. I hope I can do my family and my country proud in Tokyo.”

Bailey is not the only vastly experience member of the ParalympicsGB table tennis contingent – Will Bayley, David Wetherill and Paul Karabardak will all be attending their fourth Games.

Wetherill, 31, is responsible for one of the great memories from London 2012 – this ‘superman’ shot:

Wetherill, who competes in the Class 6 singles and Class 6-7 team in Tokyo, said: “I didn’t even know the Paralympics existed when I first started playing table tennis.

“It’s amazing when you grow up and you have dreams and you have targets to aim for which get you out of bed every day; it makes the tough times a lot easier having something to focus on.

“I could never have dreamed I would go to four Paralympic Games and irrespective of what happens that is something I can be very proud of because I have had a lot of doubts in the past year or two.

“It’s been difficult for everyone and I certainly questioned whether my body could hold together and if I would even make it so it is almost as if I’ve achieved a massive goal already irrespective of what happens in Tokyo.

“So it is a nice feeling and takes the pressure off a little bit because I do almost have the philosophy of everything else is a bonus now, which is nice as I can enjoy it.”

His team-mate Karabardak is in the same two categories and the 35-year-old Welshman said: “I’m really proud – it is probably the best team in the world to be part of and it’s really hard to be part of it. It’s been a lot of hard work so to be representing ParalympicsGB for a fourth time is really special and it means a lot.

“I haven’t competed in over a year which isn’t ideal, but preparation and training has been going really well and I’ve had lots of good match practice sessions with different players. I’ve been playing different styles so I’m still confident I can go into matches and do well.

“It would mean everything to come back with a medal because the Paralympics is the ultimate sporting competition.”

The third member of the Class 6-7 team needs no introduction – Will Bayley is of course the reigning Paralympic Class 7 singles champion, since when he has catapulted even further into the national consciousness thanks to an appearance on the BBC hit show Strictly Come Dancing.

Indeed, an injury which ended his participation in the show may have seen him unable to defend his title, had the Tokyo Games not been delayed by a year due to the pandemic.

Bayley, 33, said: “When I won the final in Rio I realised a dream that I had been going to sleep thinking about since I was 18 years old because it doesn’t get any bigger than winning a Paralympic gold medal.

“I had always said to other people that I could do it but in the back of my mind I didn’t know, so I was relieved and a bit surprised; it was a special moment and something I will never forget.

“It means everything to me to compete for my country; to represent GB is what I live for and what I train for every day; I get an extra bit of energy and drive to go for these moments because I know these chances don’t come around very often.

“I’m playing the best table tennis of my career so I know this is a great opportunity for me and I want to show people what I can do.

“It helps that I’ve got such amazing players around me who have got great opportunities as well and are really hungry for success. We have a team that can be really successful and that drives me on as well.

“I feel that I’ve got a lot to prove as an athlete – I still don’t feel I have achieved everything I can achieve so I’m excited to try and do that.”