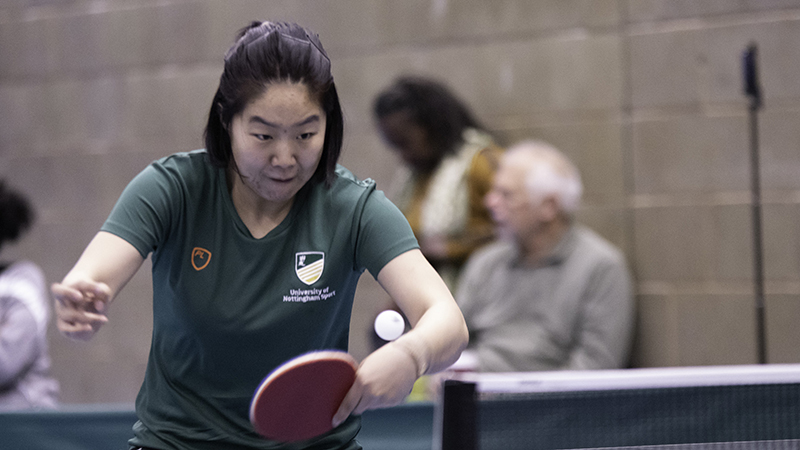 With back-up from Rachel Trevorrow, Yolanda King and Ruby Chan, the Nottingham-based leaders were in formidable form, registering three 6-0 victories and only dropping three matches in total.

Two of those were against XLNT Draycott, who led 2-1 after Emma Vickers’ five-set win over King – 14-12 in the fifth – and Inta Zdanovska’s defeat of Trevorrow. Yang’s win in four over Vickers in the fourth rubber proved the turning point.

That match was in the third round and the pivotal result of the weekend came in the fourth when YHL &UON met defending champions Burton Uxbridge, who had also been in top form with two 6-0 wins and one 5-1 victory up to that point.

The result was never in doubt, however, as Yang beat Lois Peake and King defeated Mollie Patterson, both in three straight, and YHL pulled out to 4-0 up as Chan overcame Kate Hughes in five and Yang saw off Patterson in a decider. Peake’s win over Chan gave Burton a crumb of comfort, but King rubber-stamped the 5-1 victory against Hughes.

XLNT won their other three matches to lie in third, ahead of promoted Fusion, who earned two victories over Formby and fellow promoted side Byng Hall. With no matches having been drawn, this gave the wins column of the league table a somewhat classical ‘5-4-3-2-1-0’ look.

Behind Yang in the player averages are Patterson and Emma Vickers of XLNT Draycott, both with eight wins from 10.

There is at least one unbeaten side in every division after the weekend at WV Active in Wolverhampton and leading the way in Division One is Knighton Park, who are looking to bounce back at the first attempt following relegation.

Their lynchpin was Darcie Proud, with nine wins out of 10 enough for her to top the divisional averages. Her dropped match was against Burton Uxbridge II, when she was defeated in four by Amy Marriott, in a tie which saw KP bounce back from 3-0 down to snatch a draw.

They performed a similar though not quite so extreme comeback against Halton, who were also relegated from the top flight last season, going 3-1 behind before recovering.

Three wins for KP meant they top the standings on 8pts, two ahead of Burton Uxbridge II in a tight division in which every team tasted victory.

Drumchapel Glasgow lead the way in Division 2 with an unbeaten record of four wins and one draw – that in the first round when they were pegged back by Halton II. Halton only stand fourth, however, with Thorntons and Fulham Brunswick both ahead of them and two points off the top.

Drumchapel’s Rebecca Plaistow is top of the individual standings, with a 90% win rate from her 10 matches, losing only to Sue Collier in that first-round draw with Halton as her opponent came back from 2-0 down to take it in five.

There are no fewer than three unbeaten teams in Division 3, with Cardiff leading the table just ahead of Fusion II, both with three wins and two draws. Burton Uxbridge III are a point behind having won twice and drawn three times – they were the Team of the Weekend.

Not surprisingly, the matches between those top three all ended 3-3, but through all that no one was able to get the better of Fusion’s Swetha Khatri, who boasts a 100% record from all 10 matches.

In Division 4, Joola Plymouth proved the class act as they racked up five victories and dropped only one set in the process, in a 5-1 scoreline against Cliffedale Chandlers when Hannah Winfield defeated Gemma Kerr in the first rubber.

The rankings naturally reflect the team’s dominance, with Kerr’s 90% record in third place behind the 100% ratings of team-mates Emily Haskell and Marketa Myskova – who was named Player of the Weekend.

In the parallel Division 5A and 5B, there are also clear and unbeaten leaders – Dun Laoire Ladies in 5A and NETTS in 5B.

Dun Laoire’s twin-pronged attack was Claire Heller, with a maximum 10/10 record, and Sabina Devereux who was just one victory behind. Their key tie was in the second round when they inflicted the only defeat on Cardiff City II.

NETTS also lead by two points, ahead of Drumchapel Glasgow II, who they beat 5-1. NETTS employed four players, with Lucy Wang at 100% from six matches, but Gracie Edwards tops the averages with nine wins out of 10, a record matched by Drumchapel’s Paula Callaghan.

The second round of the WBL is on the weekend of January 26 and 27.