Liam Pitchford was edged out of the Dishang ITTF Men’s World Cup by Dimitrij Ovtcharov today in a thrilling match lasting just under an hour. 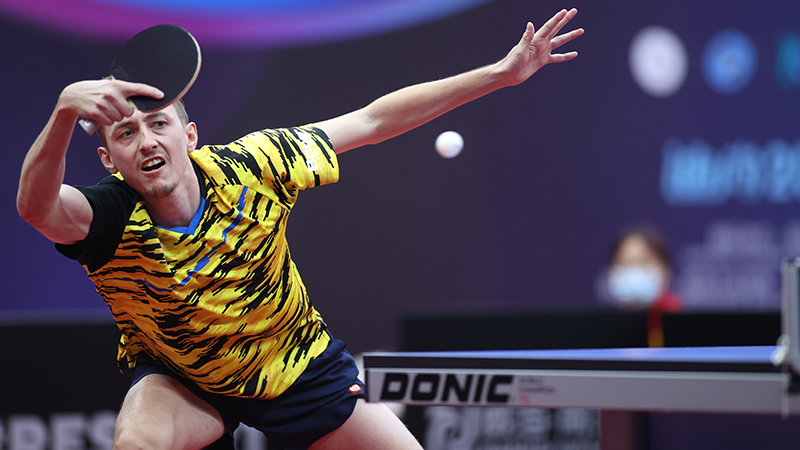 Liam Pitchford was edged out of the Dishang ITTF Men’s World Cup by Dimitrij Ovtcharov today in a thrilling match lasting just under an hour.

There was precious little to choose between the two as they took turns to lead – Pitchford fighting back from losing the first game to go 2-1 ahead and then levelling at 3-3 after again falling behind 3-2.

When Ovtcharov finally got over the line 11-7 in the decider, the match clock stopped at 58min 33sec.

Pitchford said: “I never really felt 100% comfortable in my game but I had chances – 10-8 up in the first set and then at 2-2, 10-9 I played a great reloop and he came across and backhand blocked it and got the thinnest edge possible – one which I didn’t see but I heard it, so obviously gave him the point. If I’d won that set, the momentum would have been with me.

“It’s disappointing. I felt on another day I could have taken those chances. I’m probably lacking a bit of match practice but I can’t complain. He played well and put me under pressure and I haven’t played against that kind of level for a long time.”

Ovtcharov next faces the great Ma Long of China in the quarter-finals, while Pitchford begins preparations for the ITTF Finals which start in Zhengzhou on Thursday.

And the Chesterfield man feels he is going in the right direction to find the level which saw him get to the Qatar Open final in the last tournament before the pandemic.

He said: “I’m not too down on myself and I’m feeling in a good place and doing the right work. Next week is another opportunity.

“I didn’t play badly today, it was just a little bit of experience here and there. He was on it and put me under pressure.

“It was a topsy-turvy match – at some points I was dominating and at other points he was. When I reflect on it, there’s a few things I could have done better and with a little more match practice I might have felt a bit more comfortable.

“I feel like I’m on the way to playing like I did in Qatar. It’s about finding a few small things and hopefully I can do that before next week.

“I want to challenge the best in the world and today proved that I’m thereabouts but there’s a few things needed – and I think that’s a good position to be in, knowing there’s those things to work on.”