Kicking off our series of Commonwealth Games previews, we talk to Liam Pitchford about his Gold Coast aims, plus memories of Glasgow 2014. 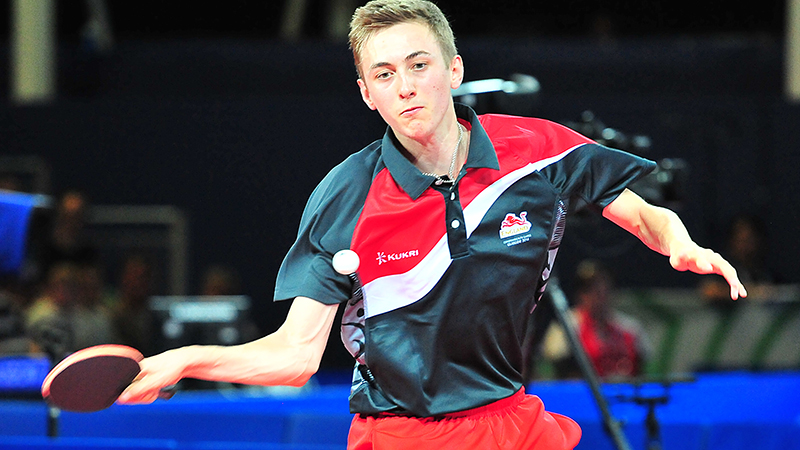 Liam Pitchford made history at Glasgow 2014 when he became the first English player to win a singles medal at a Commonwealth Games.

His 4-2 victory in the bronze medal play-off against India’s Sharath Kamal Achanta not only put him on the podium, it was also his fifth Commonwealths medal.

Keep an eye on our website for more interviews with Team England in the coming days.

Pitchford heads to Gold Coast next month with more medals in mind, with an upgrade from team silver and singles bronze the main ambitions. And having been the star performer in England’s Team World Cup bronze medal-winning squad last month, he is in the form to deliver on those ambitions.

“We go to the Commonwealth Games with expectations,” said the 24-year-old from Chesterfield. “In the team, we’ve got to aim for gold – two times in a row, we’ve come second. I think (Glasgow gold medallists) Singapore are a bit weaker now than four years ago. You never know with Nigeria, if Aruna plays well.

“I think us and India start off as favourites. We beat them at the last two Commonwealth Games and they won’t be looking forward to playing us.

“We’ve definitely got a strong team. I’m looking forward to it. We’re all really good friends off the table and we’re always there working for each other and will bring that to the table in Australia.

“We’ve had success together and we’ve had bad times as well, so we’re ready for anything.”

In the singles, Quadri Aruna, world ranked No 22, is certain to be a major threat, but Pitchford is also expecting a major challenge from England team-mates Paul Drinkhall and Sam Walker.

“In the singles, I want to gold medal and anything less than that, I would be disappointed,” he said. “Everyone there can play, but definitely Paul and Sam will be going in wanting that gold as well.

“Paul will probably go in as one of the top seeds and one of the favourites. If we play each other, there will be no love lost on the table but afterwards we’ll say ‘well done’ and that’s it.”

An England 1-2-3, while a tall order, may not be beyond the realms of possibility and it would of course repeat the mixed doubles feat from Glasgow when Paul & Jo Drinkhall won gold ahead of Pitchford & Tin-Tin Ho, with Kelly Sibley & Danny Reed in bronze.

“The mixed doubles wasn’t at the forefront of my mind, if I’m honest,” said Pitchford. “We knew we could do well, but no one will say we expected a full England podium.

“Me and Tin-Tin just clicked and played really well and without fear. In the final, we had chances but probably a bit of experience was key for Paul and Jo.”

So what are Pitchford’s other memories from Glasgow?

“We prepared really well as a team. We had a physical coach with us for a lot of the time and I felt like I was physically in my best shape,” he said.

“I knew it was going to be a long tournament but if I played to a decent standard I’d be progressing further and further. I knew physically no one could match me, and that gave me a lot of confidence.

“Team-wise, we expected to get a medal. The semi-final against India was closer than it should have been. It was good I managed to win two matches in that one and help the team into the final.

“The final itself slipped away a bit. It was a bit disappointing, but silver is never bad.

“The singles, I had a pretty good draw but the last day was really tough. I led 3-2 against Gao Ning in the semi-final and ended up losing 4-3 so I had to play for bronze in my last match of the tournament.

“It wasn’t the best quality match, I think both of us were nervous. To get over the finishing line and to be England’s first Commonwealth singles medallist was a relief. I felt it was what I came for.”

Will Pitchford and England be able to say the same after Gold Coast 2018?