Liam Pitchford is aiming to climb even higher in the world rankings after moving to within touching distance of the top 20. 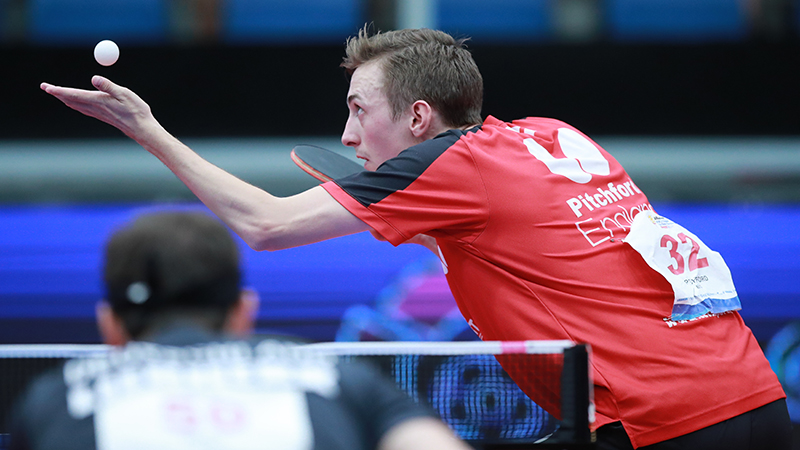 Liam Pitchford is aiming to climb even higher in the world rankings after moving to within touching distance of the top 20.

Pitchford is up to 23 in the latest ITTF list, the highest ranking achieved by an English player since European champion John Hilton reached No 5 in 1980.

It comes on the back of some superb results in the past few months, beating Ma Long in the Bulgarian Open, defeating Dimitrij Ovtcharov on his way to the Czech Open semi-finals and most recently reaching the last 16 of the men’s singles at the European Championships, going out 4-2 to top seed and eventual champion Timo Boll.

Pitchford says he is working hard to improve his game further and perform well on the World Tour – which in turn will help him climb higher in the rankings and open up some exciting opportunities.

He is planning to replicate his approach from the Bulgarian and Czech Opens when he competes at upcoming events, which will mean travelling with a support team of performance psychologist Ceri-Ann Davies and physiotherapist Dave Galea.

“I try not to think too much about the rankings and to focus on what I’m doing on the table and in the practice hall,” said Pitchford.

“I’m really happy and proud of all the work I’ve done but there’s still a lot more to go and more to keep working on. I’m not satisfied – I can go higher and that’s still the aim.

“This summer I was trying to get a team together that I wanted and that would make the difference. I couldn’t have done it without their help.

“People don’t always see what goes on in the background and Table Tennis England definitely helped with that, getting Ceri-Ann and Dave on board.

“I’ve got a lot of French League matches coming up, so the focus is on them and after that it will be on the World Tour events in Sweden and Austria at the start of November.

“I’ll try to go in with the same approach (as the Bulgarian and Czech Opens) and try to keep that working to enable myself to get the best out of it.

“If I can do well in one or both of them then I’ll be moving even further up the rankings and that means more opportunities open up.

“If I can get into the European Top 16 in January, that would be my first time in that and that gives me the chance to qualify for a World Cup.

“But the aim before that is Sweden and Austria and getting the support team there for those so I can give it a real go.”

Four English players have reached No 1 in the world – Fred Perry and Victor Barna before the Second World War and Johnny Leach and Richard Bergmann in the five years after the war.