Pitchford takes to WTT in style with opening victory 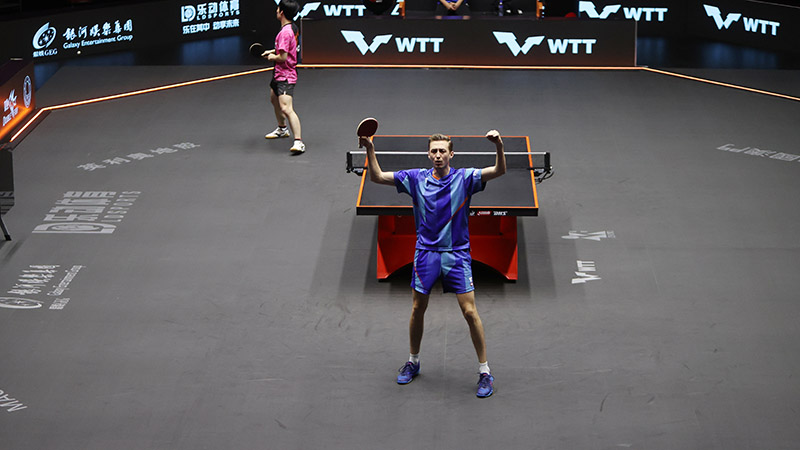 It was a close match-up on paper against an opponent ranked three places below him at world No 18, in a Battle Round One match over five games, with sudden-death points at 10-10.

In a scrappy start, there were no points won on serve until the seventh of the match, when Jang finally notched one to go 5-2 up.

Pitchford struggled to avoid the top of the net early on, though admittedly that helped him win two successive points from 5-9. He later saved two game points before a heavy Jang forehand proved unreturnable and the Korean took the first 11-9.

There were signs that Liam was finding his game towards the end of the first, and he took that into the second, opening up a 6-1 lead – another dead netcord on the last of those points.

Pitchford was upping his aggression, taking the ball earlier and setting the tempo of the rallies more than he had in the first, and two big backhand flicks won the last two points of a game he took 11-4.

To say the third game was close was something of an understatement, as the players traded points from 4-4 all the way up to 10-10.

Liam missed the game point at 10-9, a positive backhand going off, but he had the serve for the crucial sudden-death point.

The tension ramped up with two lets, but it was third time brilliant for Pitchford as he found a perfect forehand at full stretch to win the point and move 2-1 ahead in games.

Pitchford kept the momentum going and took a 3-0 lead in the fourth, forcing the Korean timeout.

It was a lead he never relinquished, bringing up three match points with a clever change of direction, and taking the first as Jang failed to lay a bat on Pitchford’s return.

Afterwards, Pitchford said: “I think I played a good game. (On the sudden-death point) I was nervous – I almost served off three times, but somehow I managed to win that point though I was on the back foot.”

On the new format and bold-looking court – an octagonal shape with black flooring and orange lines and lights – he said: “I’m really enjoying my time here, it’s been wonderful so far. To play in this new event first time, it looks great and feels great. I hope I can continue to play some good games.”