Liam Pitchford is into the knockout round of the Dishang ITTF Men’s World Cup in China thanks to two impressive victories today. 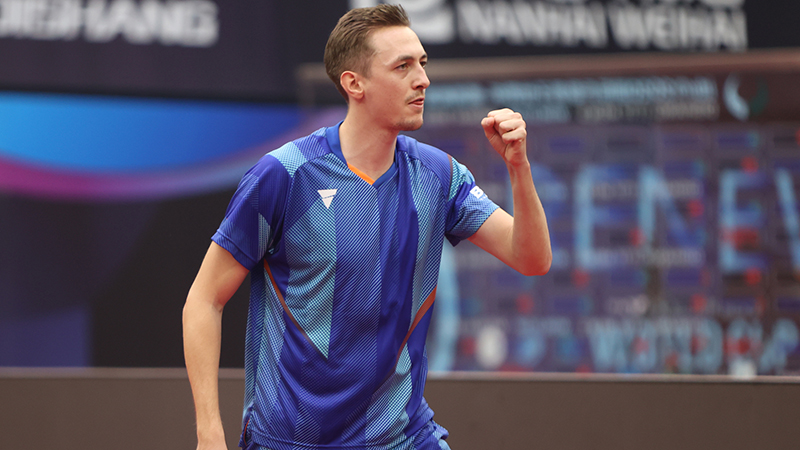 Liam Pitchford is into the knockout round of the Dishang ITTF Men’s World Cup in China thanks to two impressive victories today – and he will face Germany’s Dimitrij Ovtcharov in the last 16.

The world No 15 duly lived up to his billing as the top-ranked player in the group, but with matches against players ranked 30 and 27, he had to show his mettle.

No more so than in his second match against Kanak Jha of the USA, who took him the distance – although 10th seed Pitchford always looked the classier player and likelier winner.

A tight opening game saw no more than a point in it to 7-7, but the American took the next four points to get on the board first. Pitchford hit back in the second, building a 7-2 lead and taking it 11-4.

The third saw Pitchford’s 9-5 lead whittled back to 9-8 before he won the longest rally of the match so far to set up two game points. Again, Jha pegged him back, and saved another game point at 11-10. Both men then missed a game point in the subsequent rallies, Pitchford’s after he had finally broken to American defence to win a quickfire, prolonged rally at 12-12. But it was his last point of the game as Jha won the next three points to take it 15-13.

Pitchford upped his game to build significant leads in the next two, which he won by matching 11-5 scorelines as the American, though hanging in gamely, could not stand up to the Englishman’s heavy artillery.

When Pitchford led the next 5-2, it prompted Jha to take his time-out, the subject of which was steering clear of Pitchford’s backhand. It worked as Jha closed the gap and eventually took a 10-8 lead. Pitchford saved those game points and looked in charge of the next point until a net cord helped the American – Jha took advantage to clinch the game 12-10 and send it into a decider.

It was 5-3 Pitchford at the change of ends and, when that became 7-3, there was the first sign of a rueful smile from Jha. The end was quick as Pitchford completed an 11-4 game to take victory.

So the English No 1 is into tomorrow’s knockout stage, when the top eight seeds start their campaigns and he said: “To get two wins out of two, playing some good table tennis, I’m very, very happy.”

Pitchford said after that match: “It has been a long time, about eight months since I played an international match. I didn’t really know what to expect! I was a little nervous in the first game but once I relaxed and got into the match, I thought overall it was quite good.

The draw pitted Pitchford against Germany’s Dimitrij Ovtcharov, the seventh seed. The match is on table 2 at 3am UK time on Saturday and will be shown live on itTV.

There is live coverage of the event on Eurosport from 3am, while FreeSports’ delayed coverage starts at 11.30am on Saturday.

To catch up on today’s matches, click the links below (registration required).