Pitchford rolls on into the last 16

Liam Pitchford is into the last 16 of the World Championships after seeing off Jonathan Groth in six pulsating games in Houston. 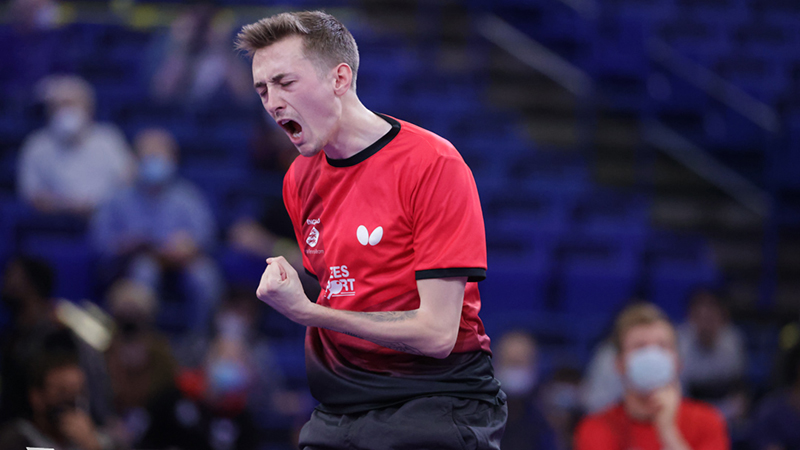 Liam Pitchford is into the last 16 of the World Championships after seeing off Jonathan Groth in six pulsating games in Houston.

Pitchford and the Dane are good friends, having shared a training base in Copenhagen, and even if that were not the case the Englishman would have been well aware of the threat posed by the left-handed world No 33.

Both men had game points in the first, which Groth took 13-11 and it was the same scoreline in the second in favour of Pitchford, though on this occasion only he had game points.

Whatever was said in the Danish corner may not have worked in that game, but perhaps carried over into the next as he built a lead and won it 11-7.

But Pitchford again stepped it up when needed, overturning a 5-7 deficit to lead 9-7 in the sixth and then, having seen Groth make it 9-9, pummelling a brutal forehand down the line to bring up match point. He took the chance and the bellow he let out showed both relief and belief.

Up next is China’s Liang Jingkun, the sixth seed, at 1.20am on Saturday morning, UK time.

Pitchford earlier revived the old faithful partnership with Paul Drinkhall and the pair, seeded 11th, made it safely through to the last 16 of the Men’s Doubles.

Faced with a Thanksgiving Day clash against US duo Nikhil Kumar & Kai Zhang, the English pair were in no mood to give any presents, pulling away from 2-3 down to a 10-3 lead in the first, which they won 11-4.

The second saw an effective timeout by the Americans, calling it at 6-7 but taking the next four points and, a beat later, the game 11-8.

The match, as so often in doubles, hinged on the third, and it turned into a prolonged and tense game in which both pairs refused to buckle. Both saved four game points apiece until, finally, the English grabbed their fifth chance, and with it the game, 19-17.

With Drinkhall’s forehand flick now working to punishing effect – three times in the fourth game, he drilled a serve straight back where it had come from – there was no danger of a US comeback.

Pitchford & Drinkhall led 6-1 and 10-3 and, though a couple of match points were saved, it was third time’s a charm as they completed an 11-5 win.

Next up are the Belgium-Poland pair Cedric Nuytinck & Jakub Dyjas, the fifth seeds, who had a four-game victory over Austria’s Robert Gardos & Daniel Habesohn.

Tin-Tin Ho could not follow her team-mates into the last 16 when she and partner Karoline Mischek of Austria were in action minutes later in the Women’s Doubles.

The former European under-21 champions, seeded 16th, were up against Thai pair Suthasini Sawettabut & Orawan Paranang, ranked just three places below them in the field.

Their opponents never allowed them much of a foothold, the only opening perhaps at 8-7 and 9-8 up in the second, before three Thai points in a row sealed that game and put them into a 2-0 lead.

The Europeans trailed 0-3 and 1-8 in the third, but although they battled back to a more respectable margin, the match had gone. In the end it was 7, 9, 7 for the Asians, who next face second seeds Kasumi Ishikawa & Miu Hirano of Japan.

The next matches involving English athletes take place on Friday night at the following times (UK):

Behind the scenes at the Worlds