Liam Pitchford’s double put his UMMC team into the Champions League quarter-finals today thanks to a 3-1 overall victory against Sporting Clube de Portugal. 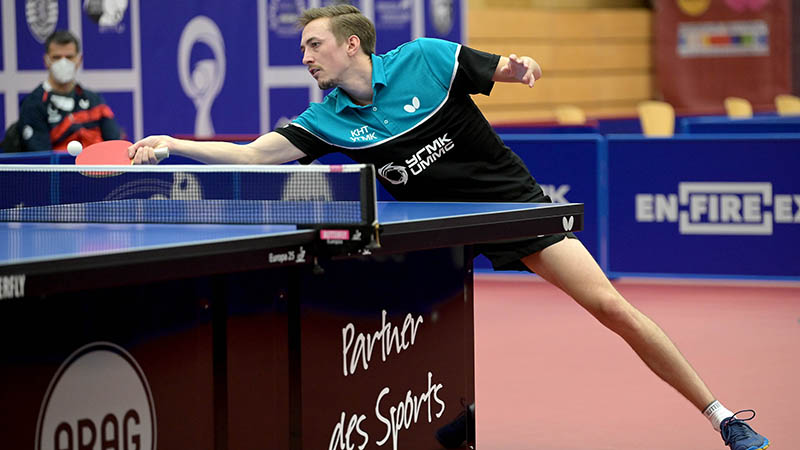 Liam Pitchford’s double put his UMMC team into the Champions League quarter-finals thanks to a 3-1 overall victory against Sporting Clube de Portugal.

Having won their first match with ease yesterday against Enfireex Ostrava from the Czech Republic, a tougher match was expected against the Portuguese, and so it proved.

Jonathan Groth gave Russian side UMMC the lead in a match which literally went down to ‘next point wins’ at 5-5 in the fifth set – deciding sets being played on a first to six points basis. Groth, who had been 2-0 down in sets, took the golden point against Diogo Carvalho to put the first victory on the board.

UMMC had to wait for victory as Bode Abiodun reduced the arrears with a 3-2 win over Tomislav Pucar, but Pitchford started like a rocket against Carvalho and, although he missed three match points in losing the third, made no mistake in the next set to complete a 3-1 (11-2, 11-6, 10-12, 11-4) victory.

It means UMMC are guaranteed to top their group and go through to the knockout stage, which starts on Tuesday.

Sam Walker’s Hennebont team, who won their first match, were defeated 3-0 in their second against highly-fancied Borussia Dusseldorf.

Walker again did not feature as his team-mates Anders Lind, Cedric Nuytinck and Omar Assar were beaten by Kristian Karlsson, Timo Boll and Anton Kallberg respectively – though Lind and Assar both went to a deciding set, with Assar beaten 6-5 on a ‘golden point’.

But Hennebont will go through to the quarter-finals if they defeat Netherlands side De Boer Taverzo – who have lost their previous two matches – in their final tie at 4pm UK time on Sunday. Watch live on ETTU TV.