Men’s Singles:
Twenty-year-old Pitchford successfully defended his title from 2012/13 after fighting off severe pressure from both Andrew Baggaley and Paul Drinkhall in Sheffield. The top seed had earlier cruised past David McBeath 4-1 in their Sunday morning quarter-final before he took on Baggaley in the most exhilarating men’s singles match.

Baggaley, who had previously beaten Pitchford in a men’s single final in Sheffield, was on blistering form to shock the hot favourite for the title. The 31-year-old began well with an 11-7 opening game and although he missed three game points in the second as Pitchford stole home 14-12, he regained his composure to re-establish his lead with an 11-9 third end.

The experienced SV Pluderhausen player then had an opportunity to extend his lead in the fourth but a weak fade at 13-13 was punished by the Ochsenhausen star who levelled 2-2. The pair traded blows once more in the next two games to force a deciding seventh end which developed into a level scoreline at 7-7.

That set up a third consecutive final with England’s no. 2, Paul Drinkhall, who had just played some of his best table tennis in a devastating 4-0 win over Mixed Doubles Champion Sam Walker. One rally in the fourth game in particular caught the eye with Drinkhall showing his best form following a powerful forehand/backhand attack combination from deep to stun his youthful opponent.

Despite his confidence, the four-time singles champion began slowly and was forced into an early timeout at 3-0 down in the second game after Pitchford had won the first 11-8. However, that move worked as not only did he win the game 11-8, but he carried on that momentum to take a tight third 15-13 and a 2-1 lead for the first time.

It was then that the world no. 55 showed his true talents by blitzing the start of the fourth and fifth games en route to turning the tide of the match. A 7-0 lead in the fourth and an 8-1 lead in the fifth quickly helped the Chesterfield-born athlete to retake the lead, heading into the sixth game.

It was important that Drinkhall began this end well and to his credit he did with a 5-1 burst. But, crucially Pitchford fought back and a big miss on an attempted drop-shot from the man from Loftus brought the top seed level at 6-6. With the score tied eight apiece, the defending champion brought his strengths to the table and won three of the next four points thanks to his favoured backhand.

A rapid drive down the line made it 9-8, before another made it 10-9. When a quick backhand pickup on the next point forced Drinkhall back the end was inevitable. Despite a number of spirited defensive shots, the 24-year-old finally missed long to hand Pitchford his second title and seal a successful defence.

The champion said: “It’s been a tough day but I’m glad to get over the final hurdle – both were tough matches. It’s always going to be hard at these championships and both of us played really well at some points.

“I don’t really know [what the difference was], there were really just a few points in it and it could have gone either way but luckily it went for me today.

“I’ve had a good season in Germany and I’m playing well. At the moment I’m just hoping to keep improving.” 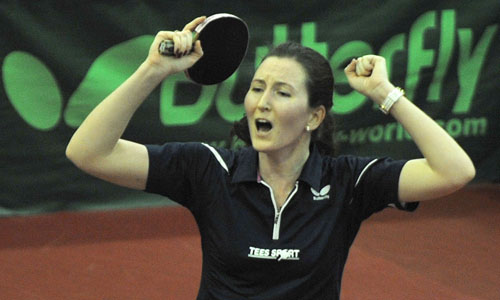 Women’s Singles:
Joanna Drinkhall surprised the form books and beat Kelly Sibley in the Women’s Singles Final for the first time in four years to deny her international teammate of a record-equalling victory.

Neither wasted any time in re-acquainting with each other at the final stage as they both cruised through their knockout matches. Drinkhall seeing off Karina Le Fevre and Hannah Hicks 4-0 in her quarter and semi-final appearances, while Sibley brushed aside the challenges from both Yolanda King (4-1) and Tin-Tin Ho (4-1).

Despite last year’s tight 4-3 final the money was still on Sibley to earn a fourth consecutive title and equal the record set by Jill Hammersley/Nicola Deaton because of the recent history between the English numbers 1 and 2. Not just at the nationals but also in the recent Bribar Bristol Grand Prix, the 25-year-old has had the needle over her great friend and rival and would have been confident heading into the key match.

Even though it was a tight opening game, the lead went to the girl from Leamington Spa with an 11-9 success sealed by Drinkhall’s counter-attacking attempt being pushed just wide. The girl from Chertsey did manage to quickly level at 1-1 with an 11-5 game but a run of points from 5-5 to 10-5 helped the defending champion re-establish her lead in the third.

Drinkhall then made a vital and well-designed change in her mentality to attack her opponent more often. From 5-2 down the defender switched to launch a triple counter-offensive and shock Sibley back to earn a 6-5 lead. This positive mentality helped her to level the match 2-2 following a lovely forehand topspin down the line on game point.

With her added confidence and extra attacking zest you could sense a shift in the momentum. An 11-7 fifth game helped to further cement Drinkhall’s authority on the match before a 6-1 break in the sixth game saw a weary-looking Sibley show distinct signs of frustration.

At 8-4 the contest seemed all over, but the Warwickshire girl pulled out the last of her energy reserves to close at 7-8 and force Drinkhall to take a timeout. Once again, her tactics proved spot-on as the next two points – sealed with a double forehand attack, gifted her three championship points.

Sibley’s clip into the net saved one, before a nervy Drinkhall missed a forehand attacking chance to waste a second as her first title since 2009/10 drifting agonisingly from touching distance. However, after a long rally, the third match point was taken when Sibley struck the net and a visibly relieved Drinkhall punched the air in delight to earn her third Women’s Singles title.

The 26-year-old exclaimed: “I’m really chuffed. It’s always a hard match against Kelly and it means so much to me to win. When it’s your goal and you fail to reach it three years in a row you think it might not be your turn.

“I was really consistent today and didn’t give her any cheap points – that was the difference.”