Pitch and Paul targeting medals after near miss at Worlds

Liam Pitchford and Paul Drinkhall believe a top-level medal could be just around the corner after they came within a match of the World Championships men’s doubles semi-finals. 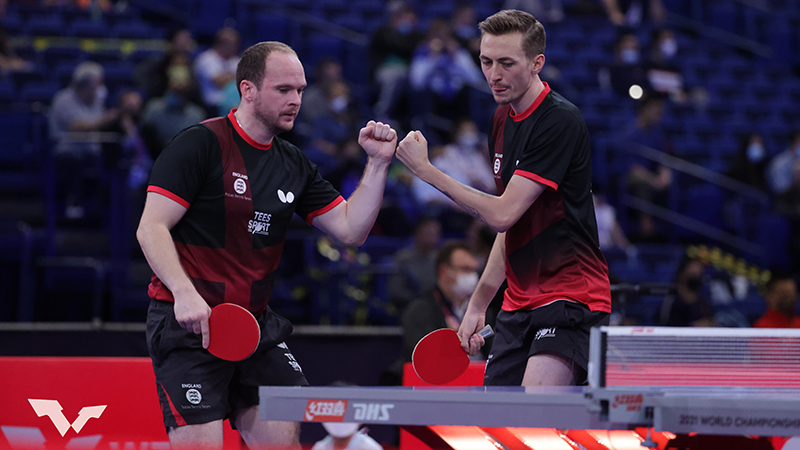 Liam Pitchford and Paul Drinkhall believe a top-level medal could be just around the corner after they came within a match of the World Championships men’s doubles semi-finals.

England’s top pair lost in four to the second seeds Shunsuke Togami & Yukiya Uda of Japan in the quarter-finals, just missing out on a bronze medal which would have been England’s first at these championships since 1973.

The first three games were decided by 12-10 margins – the English pair taking the second – and Pitchford said: “If we could have sneaked the first set it might have settled us down a bit. They’re obviously a good pair and I felt like our style fitted their game.

“We still had a chance, obviously, losing two sets 12-10, but I always felt we were chasing a little bit. But we’ve proved again we’re one of the best pairs in the world. We obviously wanted that medal, but there’s still chances to come in the future.”

“It’s just little things that were missing or weren’t quite right and probably could be put right with practice and playing together.

“It’s a positive going forward that we’re pushing these players, the No 2 seeds, with limited time together – though it didn’t help us at this event.

“Moving forward, we’re going to spend more time training on the doubles. We’ve got the Commonwealth Games next year and we want to retain our doubles title and we’re going for the team gold as well. Although it won’t be me and Liam playing doubles in the team event, if we can all improve at doubles then that will help.”

Meanwhile, Pitchford says his defeat by Liang Jingkun at the World Championships was the best he has played, as he gets back to the levels he was reaching pre-pandemic, when he reached the men’s singles final at the Qatar Open, as well as the doubles at the same event alongside Drinkhall.

Pitchford came from 3-1 down to take Liang to a decider in the last 16 of the Worlds and he said: “There’s a lot of positives to take from it. I’m obviously disappointed with the outcome, but how I played and went about it I think is definitely positive.

“I’m happy with how I played and it was a hell of a lot better than it has been. I think I’m hitting the levels I was before the pandemic, if not at a better level than I was before.

“The match versus Liang Jingkun was probably better than I’ve ever played before. There were just a few points in the match maybe I wasn’t as tactically aware as I needed to be, but that comes from playing these guys week in, week out – and hopefully I will get more opportunities to do that.

“I’ve found something in the last couple of months where I’m happy with my game and I need to keep that going. I don’t think I performed as well as I can do, so that’s the exciting thing. It’s about keeping working hard and finding that level every day in practice and when I play matches.

“It was a great game and if a couple of points here and there had gone my way it might have been a better outcome.

“He played well and he’s probably the in-form player at the moment. In the seventh, he took some risks and went for it, and I have to take my hat off to him. That’s why they’re the best players in the world.”

Pitchford appeared relaxed during the match, even breaking into broad smiles after a couple of momentous rallies, and he said that was something he and coach Gavin Evans hads discussed.

“I enjoyed it,” he said. “Me and Gav spoke a lot about that. In the last year or so I haven’t really been enjoying it but we spoke about going out and smiling and enjoying it and I think it’s helped. When I’m relaxed, I play my best. At some points, you don’t want to smile, but I tried to keep relaxed and enjoying it.”

Drinkhall was philosophical about his first-round defeat in the singles, where he lost to world No 24 Marcos Freitas of Portugal.

He said: “It’s the way the draw is done now but on my day I can beat Freitas. It was close and I had a chance to make it 2-1 to me and turn the match in my favour.

“The result is disappointing but the performance was okay. I’m not going to say it was good, but it certainly wasn’t bad, and losing to someone like him is not a terrible result. That’s sometimes the way it is.”