Pickard and Shilton serve up silvers

Silver medals for Fliss Pickard (women’s class 6) and Billy Shilton (men’s class 8) rounded off some great performances by British players in the singles events at the ITTF Para Polish Open in Wladyslawowo. 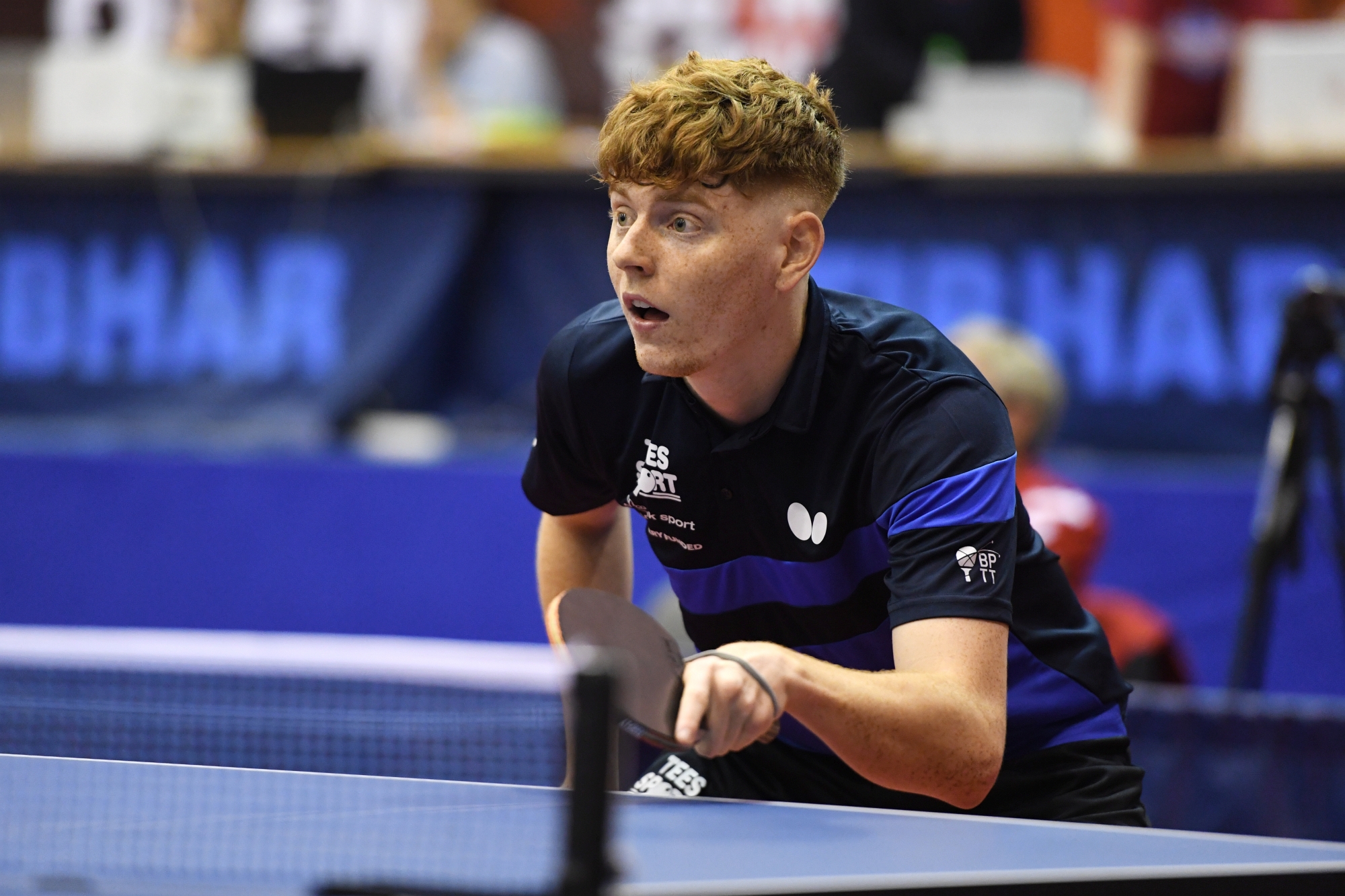 Pickard had progressed to the knockout stages as the winner of her group after a 3-0 win against Darya Paluyan from Belarus and a battling victory against Gabriela Constantin, fighting back from 2-0 down to beat the Romanian 3-2.

A 3-0 win against Emelie Endre from Sweden in the quarter-finals set up a semi-final against Katarzyna Marszal the world No 5 from Poland. Pickard had won their last four meetings including a 3-0 win in the World Championships last year but the Polish player is always a tough competitor and levelled at 1-1 and 2-2 before Pickard ran away with the deciding set 11-2.

In the final she faced the top seed and world No 2 Raisa Chebanika and the Russian former Paralympic champion and reigning European champion was a 3-1 winner to take the gold.

“I’m pleased to get another medal,” said Pickard, “but the biggest improvement I made from Slovenia was my approach and application towards matches. I didn’t feel my level was great but it’s nice to win matches in these situations. I felt I had chances in the final – just little things to work on not only when I get back into the training hall but also in the team event here.”

Shilton had started with a 3-0 win against the 21 year old Romanian Robert Boroleanu and after a 3-0 loss to former world champion Richard Csejtey from Slovakia he went through to the knockout stages with a 3-0 win in his final group match against 19 year old Devin Wassink from Netherlands. After defeating Samuel De Chiara, the European team silver medallist from Italy, 3-0 in the last 16 he produced a great performance to beat top seed and London 2012 bronze medallist Emil Andersson from Sweden 3-1.

Against his team mate McKibbin in the all-British semi-final he lost the first set but came back to take the next three 9,10,9 to go through to the final against Marc Ledoux. The former world No 1 from Belgium used all his experience against his younger opponent, taking a close first set and then securing the match 3-1 after Shilton had levelled at 1-1.

“It has been a great competition for me overall and I’m delighted with a silver medal,” said Shilton. “The level I have been playing in training is really starting to show and I’m really pleased I am getting the results as well.”

McKibbin began with a comfortable 3-0 win against Curtis Caron, the Pan-American team gold medallist from Canada, and followed that with a 3-1 win against Ledoux. He secured first place in his group with a 3-0 win against 23 year old Steffen Salomonsen from Norway and a 3-0 win in the last 16 against Lam Ka Wai from Hong Kong took him through to the quarter-finals where he defeated Piotr Grudzien, the Rio Paralympic bronze medallist and former world No 1 from Poland, 3-1 before losing the semi-final to Shilton.

“I played very well,” said McKibbin, “continuing the good form from Slovenia. I was happy with how I played up until the semi-final – it is always hard playing a team mate and it felt even stranger in an international. Billy played very well and I’m happy for him although I am personally disappointed as I believe that the way I was playing I could have won this competition.

“But moving on to the team event we are clearly both in great form so I’m looking forward to it and over the last two singles events I think I’ve put myself in a good position for Tokyo.”

Stacey had beaten world No 3 Juan Perez Gonzalez from Spain in Slovenia earlier this month and he repeated that victory in his first group match, beating the very experienced World Championships bronze medallist 3-0.

A second 3-0 win against the former European team bronze medallist from Poland, Pawel Konstantyn, sent Stacey through to the knockout stages as group winner and he received a bye into the semi-finals where he faced Mohamed Kalem. The Italian world No 4 beat Stacey in Italy and Slovenia and it was very close again today, with Kalem taking the match 11-9 in the fifth.

“It was good to beat Perez again especially playing him again so soon after Slovenia,” said Stacey. “Obviously I’m disappointed not to have beaten Kalem this time but I’m always getting closer which shows that I’m going in the right direction.”

Facey Thompson was beaten 3-0 by Kalem in his first group match but secured his place in the knockout stages with a 3-0 win against the Polish world team gold medallist Pawel Jablonski. In the quarter-final he recovered from dropping the first set to beat Perez Gonzalez 3-1 and his reward was a match against World, Paralympic and European champion Laurens Devos.

The 18 year old Belgian has dominated men’s class 9 since he made his international debut five years ago but Facey Thompson pushed him for three sets, losing the first two 12 and 15 and taking the third 11-9 before Devos won the fourth set to clinch the match 3-1.

“I played the way I know I can play,” said Facey Thompson, “and I’m very happy with my performance. My training level came out in the matches and I really enjoyed playing and was playing with a smile on my face. Perez was a match I needed to win for my confidence and I had my chances to win against Devos and was very happy with the way I pushed him.”

Perry lost his opening group match to the Romanian world No 5 Bobi Simion 3-1 but progressed to the group stages with a 3-1 win in his second match against 17 year old Ignacio Torres Orostica, the Pan-American bronze medallist from Chile.

That took him through to the quarter-finals where he defeated another Chilean Matias Pino Lorca 3-1 to earn a semi-final against the world No 1 Alvaro Valera. The Spaniard is a former world and Paralympic champion and the reigning European champion and he was just too strong for the man from Paisley in a 3-0 win.

“I think my overall level has been good,” said Perry. “At times it has been what I know it has to be at a more consistent level but I’m happy with my fight on the table and the way I’ve worked the points. Alvaro is always tough – he’s the world number one – but I feel that I made him play and it wasn’t an easy match for him. I feel I could have taken the first and third sets but it wasn’t to be. I’m looking forward to playing the team event and then heading to Mexico next week.”

In men’s class 10 Kim Daybell dropped the first set to Igor Misztal from Poland 13-11 but came back to beat the world and European team gold medallist 3-1. He lost in three close sets to Bas Hergelink, the 22 year old world No 11 from Netherlands but progressed from his group with a 3-0 win against Gilles De La Bourdonnaye from France, the former Paralympic, world and European champion.

Daybell played another Frenchman Mateo Boheas in the quarter-final and took the first set but the 22 year old world team bronze medallist came back to take the match 3-1.

Megan Shackleton did not progress from a tough group in women’s class 4, losing her first match 3-0 to the world and Paralympic champion Borislava Peric-Rankovic. She started well match against Fatmeh Al Azzam but the experienced Paralympic and world team medallist from Jordan came back from 2-0 down to take the match 11-9 in the fifth. Shackleton fought hard in her final match against 21 year old Aleksandra Vasileva, leading 2-1 before the European team silver medallist from Russia recovered to win the match 3-2, 11-7 in the fifth.

The tournament continues with the team events which conclude on Saturday.