The PG Mutual National Championships are returning to the University of Nottingham for the 2018/19 season. 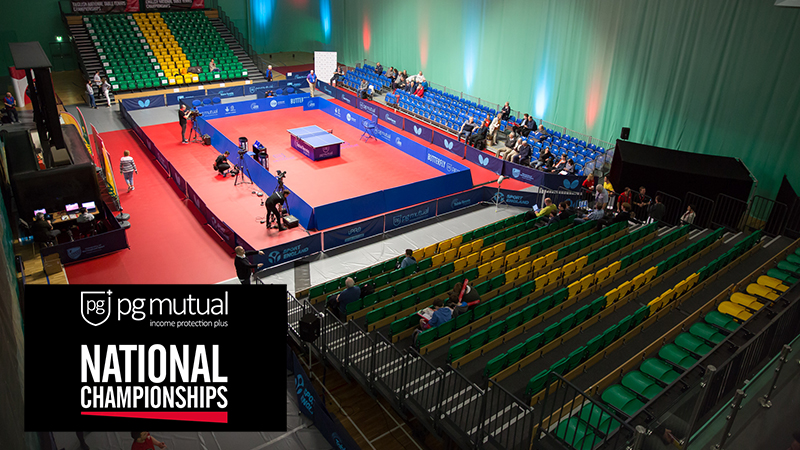 The PG Mutual National Championships are returning to the University of Nottingham for the 2018/19 season.

The David Ross Sports Village will host the best players in the country for the Senior event from March 1 to 3, 2019.

The top 20 men and women in the rankings will be invited to compete and will this year be joined by those who earn their places via January’s qualifying tournament, plus up to two wildcards.

The schedule will also include para events for wheelchair and standing athletes, plus the Under-21 men’s and women’s singles.

It is a return to the venue which hosted the 2017 PG Mutual Senior Nationals – last season, the event was at the Copper Box Arena on London’s Queen Elizabeth Olympic Park, where the ITTF Team World Cup had ended four days earlier.

Those 2017 Nationals were held a few months after the opening of the £40 million David Ross Sports Village, which provides excellent facilities for players and up to 1,100 spectators.

“With players who come through a qualifying event taking their places alongside England’s elite athletes, it promises to be a fantastic tournament.”

The venue will also host the Cadet & Junior Nationals on May 11 and 12, 2019 and Mills added: “We are also delighted that our younger age groups will get the chance to experience playing at a state-of-the-art venue.”

Mike Perry, CEO of PG Mutual, said: “We’re pleased to partner Table Tennis England for the PG Mutual Nationals for seniors for a fourth year and to extend that sponsorship to the cadets and juniors.

“The PG Mutual Nationals is the pinnacle for any English player and we are extremely pleased that more players than ever will have the opportunity to perform at the highest level against elite world-class players at a great venue with excellent facilities.

“Table tennis is a sport played by the all ages and sponsorship of the Nationals is key to gaining more exposure for the PG Mutual brand as our product is aimed at protecting families’ current lifestyle if an income is lost due to accident or illness.

“Over the last four years Table Tennis England, players, coaches and volunteers have welcomed me into the table tennis family, for which I’m very grateful and I look forward to seeing you all once again at the PG Mutual Nationals.”

“As the leading university for table tennis in the country, University of Nottingham Sport are proud to be working in partnership with Table Tennis England to deliver such prestigious events and we look forward to welcoming the current and next generation of table tennis stars to Nottingham.”

Recent graduates of the university include Maria Tsaptsinos, while fellow Commonwealth Games medallist Tin-Tin Ho is due to start there this year.

A number of other highly ranked players are either still at Nottingham or have graduated in recent years, including Adam Harrison, Yolanda King, Liam McTiernan and Gabriel Achampong. Kelly Sibley is the Head Coach there.

Sports Officer Emma Hodges said: “This is an amazing opportunity for our students to see table tennis played at the highest standard, watching some of the very best athletes, those to watch in the future and to support some of our very own students and alumni who may be competing in 2019.”

Plans for TV coverage of the events will be revealed nearer the time.