Team Bribar opened a handy lead in the men’s Premier Division, but it is tight at the top of the women’s Premier after weekend one of the Veterans’ British League in Derby. 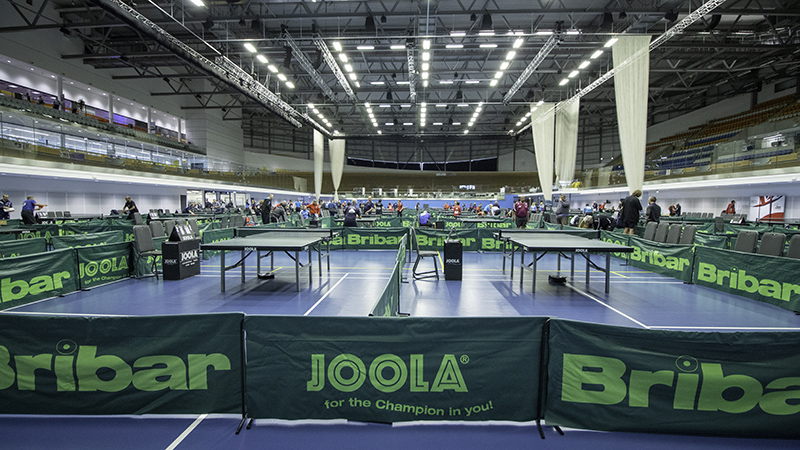 Team Bribar opened a handy lead in the men’s Premier Division, but it is tight at the top of the women’s Premier after weekend one of the Veterans’ British League in Derby.

With 14 divisions in action, and almost 400 players, it was a busy weekend at Derby Arena and Draycott & Long Eaton TTC as teams jockeyed for position going into the second weekend in February.

Team Bribar carried all before them in the men’s Premier Division, winning all five matches to open a three-point lead over PPong VETTS, Wolves VETTS a point further back.

It was PPong who pushed the leaders closest in their meeting, in the final round on Sunday afternoon, the leaders winning it 4-2. Andrew Wilkinson put PPong in front with a victory over Jason Ramage in three, and Neil Charles later beat Ramage to make it 2-2. But doubles for Kevin Dolder and Chris Rogers saw Team Bribar over the line, Dolder coming from 2-1 down to Jason Thompson to win the crucial final match 11-9 in the fifth.

Other than that, Team Bribar’s only other momentary alarm was when they trailed Wolves when Simon Pugh beat Rogers 3-1 in the opening tie of round 2 – but Bribar came back to win 5-1.

PPong had earlier been held 3-3 by Topspin Fusion in round 4, the only drawn match in the division. That was a topsy-turvy affair in which Topspin twice trailed, before taking a 3-2 lead. Wilkinson brough PPong back on terms in the last match, defeating Thomas Haddley.

In the women’s Premier, there are joint leaders in the shape of Market Rasen and Knighton Park, both of whom won four and drew one.

The top two met in the second round of matches on Saturday and, not surprisingly, that was the drawn encounter. Knighton Park may feel it is more like a victory, however, having come from 2-0 and 3-1 down to claim a point. Julie Lawrence reduced the arrears to 3-2 by defeating Sarah Horsnell in four and then Teresa Bennett sealed a draw for KP by beating Jane Vickers 3-0 (9, 7, 9).

With a five-point gap to Ellenborough and Bribar Failand, the title already looks to be between the top two.

Ashford were actually impossible to beat, but managed the unusual feat of drawing all five matches. This means Topspin Fusion are second, two points behind the leaders and with a buffer of 2pts themselves over the rest.

Northern Belles are unbeaten in Division Two, having drawn against Billwood. Belles were 3-2 ahead when Karen Henry beat Caroline Cole 17-15 in a decider, but Brigitta Palinkas levelled for Billwood by overcoming Shirley Gelder 12-10 in the fifth in the final match.

Belles defeated nearest challengers Sutton at Hone 5-1 in the final round of matches to stand a point clear at the top.

The five-team Division Three sees Foresters II at the top with a 100% record from their four matches, leading their stablemates Foresters III by two points. With a three-point gap to third place, it is a stretch to see the title heading anywhere else by the Foresters club.

The match between the two club sides took place in the first round and resulted in a 5-1 victory for the senior team.

Team Ecosse and Central are both on seven points, two behind the leaders – the former are unbeaten having drawn three times, including against Central.

Foresters A top the table in 1B with a perfect record of five wins to stand three points clear of Cippenham. Foresters were pushed hardest by St Georges, against whom they trailed 2-1 before taking the next three matches 3-1.

Foresters C are unbeaten in Division 2A, with 8pts for three wins and two draws. Foresters actually won all three Saturday matches before being held 3-3 on the Sunday by both Seasiders and Archway Peterborough. Seasiders earned that point by coming from 3-1 down, a fightback sealed in the final match as Andrew Jackson beat Matthew Spero 11-8 in a decider.

Nailsworth Phoenix and Archway Peterborough are two points behind the leaders, having won two, drawn two and lost one apiece – one of their draws coming in the match against each other.

It’s tight at the top of Division 2B, where Westfield Nomads and Draycott III both remain unbeaten but with only two wins apiece. In a division of drawn matches – every team drew at least twice – Ashford a point behind the leading pair.

The top two, not surprisingly, drew – Draycott coming from behind three times to earn the point in the final round of matches.

Norton Commandos are the top dogs in Division 3A having dropped only one point. Halton are a point behind in second, also unbeaten with three wins and two draws, and it was they who inflicted the only dropped point on the leaders.

They met in the third round and Halton had the chance to take both points as they twice came from a match down to lead 3-2. Neil Hough levelled for Norton by defeating Brian Hallsworth in four in the final match.

Joola Plymouth were flawless in 3B to take what already could be an unassailable four-point lead over the rest.

They had two 6-0 and two 5-1 victories, with only PSP Group coming close to taking anything from them in the second round. PSP closed from 3-0 down to 3-2 but Paul Whiting beat Ian Packford in three to complete victory for Plymouth, whose nearest challengers are Dewsbury on 6pts.

The eight-team Division 4A is headed by Sycamore Zygabyte who won four and drew one of their five matches to stand two points clear of Topspin Fusion II and De Vere NETTS.

The draw came in the first round and it was against De Vere, for whom Paul Davison won the sixth and final match against Joe Zygadlo to claim a share of the spoils.

It is a similar picture in 4B in that Horsham Spinners are top with four wins and a draw – but their margin is only a solitary point – Newton Abbot are also unbeaten with three wins and two draws.

There was nothing to separate the top two when they met in the first round. Horsham took a 2-0 lead but Dean Sully got Newton Abbot on the board by beating Shaun Bibby 13-11 in the fifth, and they won the next two matches to take the lead. But Rory Scott’s 3-0 win over Sully earned Horsham a point.

The nine-team Division 5 is headed by Border Reivers, who hold a two-point lead having won all five of their matches

Wirepoint Bulldogs are second but also have a 100% record from four matches, so the clash between the top two on Weekend 2 will be pivotal.

In the averages, Niall Cameron and Kevin Dolder of Team Bribar had 100% records in men’s Premier, albeit from five and four matches apiece. Team-mate Chris Rogers had a 90% record from the full complement of 10 matches.

There are two 100% records in the women’s Premier, Sara Williams of Ellenborough from the full 10 matches and Teresa Bennett of Knighton Park from six. Rosemary Rainton of Market Rasen has 90% from 10.

Angie Bristow was unblemished in Division Two, winning all eight for Sutton at Hone.

Perfect records in the men’s divisions were achieved by Stewart Crawford of Team Ecosse in 1A, Chris Bartram of Foresters A in 1B, Sherwin Remata of London Moberly in 2A, Paul Whiting of Joola Plymouth in 3B, all from 10 matches. Anthony Bates for Halton in 3A and Rohan Schloss for Topspin Fusion II in 4A had 100% from eight matches , as did two players in Division 5 – Geoff Salter of Border Reivers and Stephen Green of Wirepoint Bulldogs.