Paul weathers the storm to go through

Paul Drinkhall is through to the second round of the Olympics after a tough match against an emotional opponent. 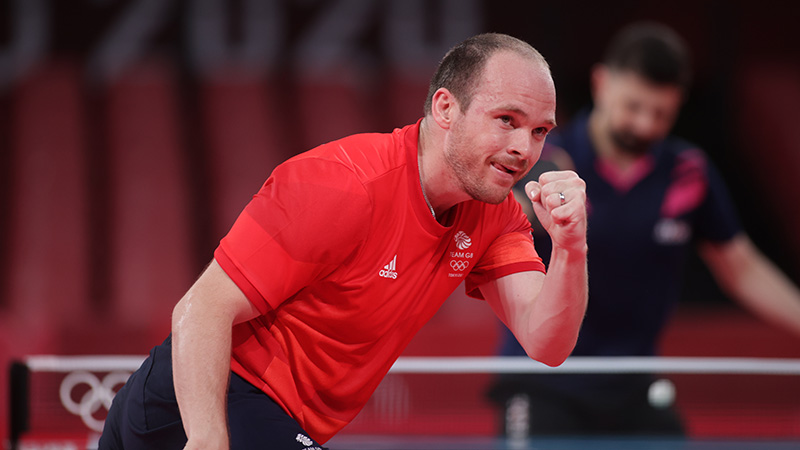 Paul Drinkhall is through to the second round of the Olympics after a tough match against an emotional opponent.

Paul had to show terrific mental strength and focus to overcome Nima Alamian, who at one stage looked like he might storm off the court as he struggled to control his temper.

The source of the Iranian’s ire was a series of fault calls by the umpire for a non-vertical toss. The first, at 2-3 in the first game, passed relatively calmly and Paul reacted in the best way he could by making sure he won the next two points on his serve. It set him up to take the game 11-7.

The second fault at 1-2 in the second game started a bizarre chain of events which only ended when Paul won the game 11-1. Alamian’s reaction to the fault – throwing his bat on to the table for a fair old distance – earned a yellow card. Again, Drinkhall was a perfect example of controlling the controllables and won the next few points with his best sustained period of the match.

Then, at 1-9, Alamian launched what can only be described as an underarm tennis serve almost out of the court and followed up with a short serve with Paul not ready. After the Iranian was initially given that point, that serve was also deemed illegal and Paul had the game 11-1.

There was another fault in the third, and again Paul built a lead and turned it into an 11-5 win – coach Gavin Evans in the corner telling him “good work” at the changeover.

Paul now faces Austria’s world No 25 and 17th seed Robert Gardos of Austria in the second round – a player he has not beaten in four previous meetings.

Paul acknowledged afterwards that it had been a difficult match.

He said: “The game was very bitty and breaking up a little bit and obviously, when he wanted to, he was complaining more and taking more time.

“It must have been very frustrating for him and I’m sure he’s going to go home and be very disappointed with how it went. You try to win the next point and that’s how you try to reset. Sometimes it takes longer to reset because he’s away talking, the coach is shouting or whatever, but you reset for the next point and go on and play. I think I did that very well today.

“There’s been times when the umpire’s been picking me up on things and you’re not happy with it, but you have to talk, get the info you need and move forward. Today, I did that a lot better than him.

“In the second, at 3-1 or whatever it was, that was when he kicked up the biggest fuss and he actually played pretty well after that but I played probably the best I did in the whole game in that set.

“That was a big change in the match because he threw everything at that set. I saw him a couple of times look to his coach and shrug his shoulders because he didn’t know what else to do. That set was the one that changed the match.

“The first match can be a bit tricky sometimes. I lost to him last time, so I had a think about that game and how that went.

“The first three sets I was very good and then I think possibly I just wanted to get to the finish line and was thinking about that a little bit too much. Not consciously, but I think sub-consciously I went a little bit safe and he took advantage of that.

“I delivered a really good performance today and I’m very happy with the result.”