Paralympic joy for Gilroy and Hunter-Spivey

British Para table tennis players Sue Gilroy and Jack Hunter-Spivey have secured qualification for the Paralympic Games in Tokyo by winning their respective events at the World Qualification Tournament in Lasko, Slovenia today. 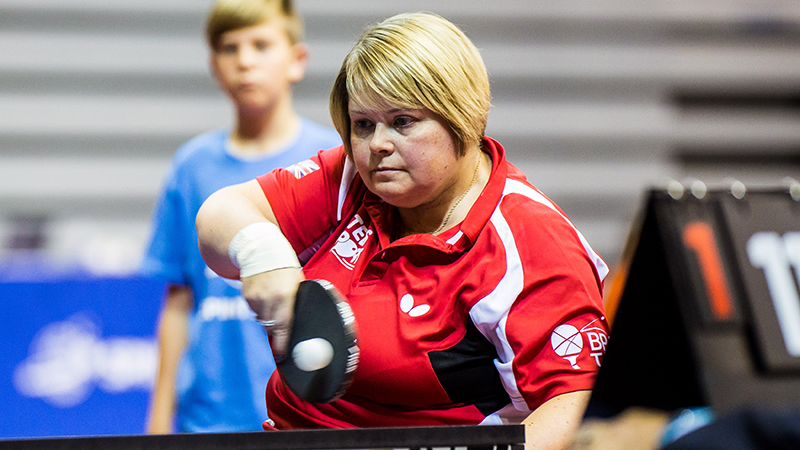 British Para table tennis players Sue Gilroy and Jack Hunter-Spivey have secured qualification for the Paralympic Games in Tokyo by winning their respective events at the World Qualification Tournament in Lasko, Slovenia today.

Five-time Paralympian Gilroy, a primary school teacher from Barnsley, beat Irem Oluk from Turkey 3-1 in the final of women’s class 4 and Liverpool’s Jack Hunter-Spivey was a 3-0 winner over the German Joerg Didion in men’s class 5.

However, there was huge disappointment for Fliss Pickard (women’s class 6), Billy Shilton (men’s class 8) and Ashley Facey Thompson (men’s class 9) who all lost their semi-finals and will now hope to receive a wildcard to compete in Tokyo.

This is the first time that a Para table tennis qualification tournament has been held for a Paralympic Games and there was only one prize in each class – the last qualification spot for Tokyo for the winner. This unique challenge was even harder for the 210 athletes from 47 countries as this was the first international tournament since March 2020 due to the covid-19 pandemic.

Sue Gilroy last played her semi-final opponent Faten Elelimat, the 27-year-old former world teams bronze medallist from Jordan, in 2014 and after winning a nervy first set 11-9, having led 9-2, she took the second 11-7 and ran away with the third 11-1 for a 3-0 win.

That took her through to the final against 20-year-old Irem Oluk from Turkey who had beaten the  top seed Lu Pi-chun from Chinese Taipei in the semi-final. Oluk took the first set 11-8 but Gilroy responded by winning the second 11-5 and then took the third set 11-8 after both coaches had called time out. She used all her experience against her young opponent in the fourth set and took it 11-9 to win the match 3-1.

“It’s just been such a difficult five years for personal reasons,” said Gilroy. “I’ve been through a divorce then the covid pandemic, so I’m absolutely thrilled and stunned to win this tournament. I’ve put a lot of hard work in and thankfully it’s paid off.

“Not competing for so long was difficult because you are out of that mindset of tournaments and preparation for matches but thankfully my preparation here has been spot on. I’ve been doing video analysis and meetings by Zoom with my coach Neil (Robinson) because I haven’t seen him for well over a year, so I haven’t been able to train with him which has been very difficult, but we have gelled again over here and it has worked out well.

“It has been so challenging after losing out on qualification last year. There was a lot going on in the background and my head wasn’t where it should have been playing table tennis but now I’m in a happy relationship with Scott Robertson (Paralympic table tennis player) who has been amazing; my team-mates have been so supportive and the coaches and everyone at the EIS in Sheffield has helped so much with my training, so it is thanks to them.”

In the semi-final Jack Hunter-Spivey faced Ki-young Kim from Korea and missed his chances to take the opening set, the 2014 world silver medallist coming back from 10-7 down to take it 13-11. Hunter-Spivey responded well, taking the next two sets 11-5 and 11-9 to lead 2-1 and held his nerve in the fourth, taking the set 11-9 and the match 3-1 on his second match point.

The 26-year-old took control at the beginning of the final against Joerg Didion, the former European team gold medallist, establishing a 2-0 lead (11-5, 11-3). However, the German fought back in the third, leading 8-4 and 9-5 and had points to win the set at 10-8, 11-10 and 12-11 but Hunter-Spivey saved them all and clinched the match 14-12 on his first match point when Didion sent a forehand long.

“It is one of the very rare times that I was speechless,” said a delighted Hunter-Spivey. “This is what I’ve been thinking about for the last 18 months or so and I’m made up that I have qualified for Tokyo and I can’t quite believe it has happened. I want to thank everyone who has supported me back home; I’ve done this for everyone involved. It’s been an incredible journey and I want to take a medal in Tokyo now.

“Not being able to play a tournament for so long and then the first tournament you play you have to win was a very strange thing to get my head around, especially when I lost my first group game here on Thursday. For months I was saying to myself ‘you can’t lose, you’ve got to win every match’ and then I did lose and it was almost a relief because I thought ‘I have lost but I’m still in the competition’. Will Bayley face-timed me and said ‘bro I did this in Rio and I went on to win it’ so I thought ‘OK, I can still do this’.