Former Paralympic champion Neil Robinson, who is now an integral part of the British Para Table Tennis coaching team, has been presented with an Honorary Fellowship by Bridgend College 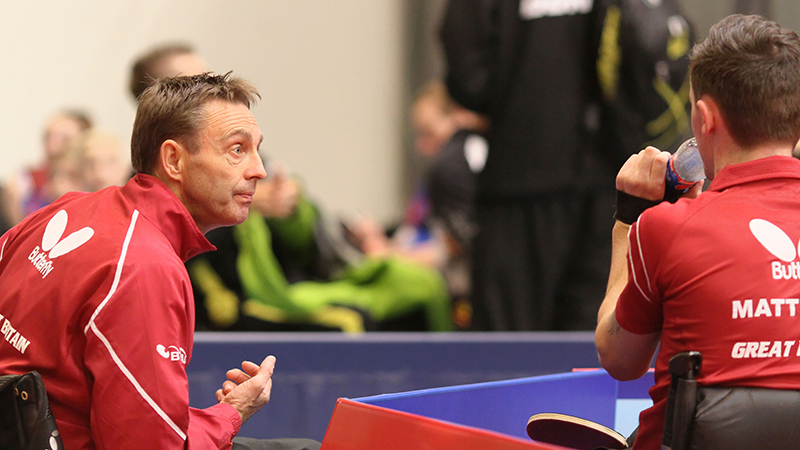 Former Paralympic champion Neil Robinson, who is now an integral part of the British Para Table Tennis coaching team, has been presented with an Honorary Fellowship by Bridgend College in recognition of his service to Great Britain, Wales and the community of Bridgend through his success in Para table tennis as a player and now a coach.

Robinson was studying electrical engineering at the college when he was a passenger in a car accident at the age of 18 that left him wheelchair bound and changed the course of his life.

“Then in year three I had my accident and everything changed. I was sports crazy and played football to a reasonable level and had sporting ambitions as well as plans for a career and all of a sudden it seemed like my plans were over.

“I’m a positive person and very competitive and when I was lying flat on my back in bed for 12 weeks and in hospital for seven months I had a lot of time to think. Thankfully I try to look on the positive side of life and while I was doing rehab with the physios one day I saw some guys in wheelchairs playing table tennis in the gym. So at the end of the session I went to have a look and had a go and realised that not only could I could keep the ball on the table but that I had a bit of a talent for it.

“My only exposure to table tennis prior to that was playing with my family on the dining room table hitting the ball over a row of books. When I was discharged from hospital I found myself a local club and basically anyone who was prepared to stand at the end of a table to help me develop.

“I had no idea about what was out there in terms of the international side of things but I then got in touch with the Welsh Paraplegic Sports Club and it basically went from there. By default I found myself involved with the GB squad because I phoned Stoke Mandeville one day to enquire about the wheelchair table tennis set-up nationally and at the time they were preparing for the Paralympic Games in 1980 in Arnhem in the Netherlands.

“They told me there was a camp that weekend so with a friend I drove up there the following Saturday. Ted Inge was the head coach/team manager and we had a chat with him. I basically gate-crashed one of their preparation camps but they invited me in and I played a bit. They invited me back so I started going to the GB camps after the Paralympics in 1980. I first played for GB in 1981 in Italy and competed in my first European Championships in Switzerland later that year.”

Robinson went on to become one of Britain’s most successful Paralympians, representing his country in seven Paralympic Games, winning seven medals including gold in the men’s class 3 team event in Barcelona in 1992. He was also European champion and world No 1. In 2012 he received an MBE in the Queen’s New Year Honours List for his services to sport.

Having retired from playing after the Paralympic Games in Beijing in 2008, Robinson was asked to help prepare the British Para table tennis players for the challenge of a home Games in London 2012.

“I always had an interest in coaching,” he said, “and felt I had a natural empathy with disabled athletes. I had a vision to set up a hub in Wales and pass on my experience and knowledge to anyone who was prepared to listen. I started to coach at the Welsh Institute of Sport in Cardiff in January 2009 and set about creating professional training environment where the players could come for quality coaching and advice and allow them to develop and reach their potential.

“Some of the proudest moments I’ve had since I started coaching were London 2012 when Paul Davies won bronze and Rob Davies winning gold in Rio 2016. Also, Rob, Tom Matthews and Paul, who I work with daily, taking gold, silver and bronze at the European Championships in 2017 and recently Tom winning bronze at his first World Championships.

“The feeling I get from coaching is actually sometimes a greater sense of achievement than that of being a player. The frustration is you can’t hit the ball but in addition to the months of preparation and when coaching at events I hopefully have a positive impact on the guys, put them in the right frame of mind, give them the right tactics and motivate them to play well. I am now totally focused on preparing the players for Tokyo 2020.”

Although he returned to Bridgend College after his accident, Robinson transferred from electrical engineering to business studies, gaining an OND, HND and then an AAT.

“It was a complete departure from what I was going to do initially,” he said, “and at the same time I was getting more involved in table tennis. My links with the college are both before and after my accident and have had a positive effect on my life. I feel very honoured to have been presented with this Fellowship and it was a very proud moment when I received the award.”