Hugo Pang led the English success at the recent Cadet 6 Nations in Denmark. Competing along sides such as Sweden, Germany and Netherlands, England were able to return with two medals, including a silver for the boys team (as pictured above).

Boys Team
England’s Cadet boys (Marcus Giles, Luke Savill, Hugo Pang and Alec Ward) had a difficult start to the competition, coming up against a strong Denmark side. The A Team suffered a 3-2 defeat and the B side suffered a 5-0 loss (8-2) overall.

The boys upped their game and managed to achieve a 5-5 draw with Sweden, despite many match points in England’s favour not being converted into a win.

Next up was the Netherlands, the A Team lost out 4-1 with both Luke and Marcus holding a significant lead in the 5th sets in 2 of their singles. However, the B Team came to the rescue and had a successful 4-1 win over the Netherland’s B team.

The final match was against Germany and this time all the England players brought their A game and taught the Germans a lesson with their 7-3 victory. This was to prove a crucial victory as with one win, two draws and one loss England managed to sneak into second place on a count back decision.

There were some fantastic performances from each player at times but they struggled to perform consistently at the same time at this level.

With nerves playing a large part in their performances, the girls finished the competition in fifth place. As the tournament progressed, they all seemed to settle and become familiar with the occasion but a little too late. Next time, a stronger, more confident England girls side will be present.

Singles
There were some fantastic singles matches by all and some great wins to go with them but with groups of five and six, just one slip up could mean elimination.

This proved to be the case with many of the England players. Marcus and Luke both suffering losses from players they had beaten in the team and thus meaning they weren’t able to progress.

However, one England player, Hugo Pang, rose to the occasion winning all five matches in his group (including a close victory against the European Under 13 No. 1, Jannik Xu, from Germany). 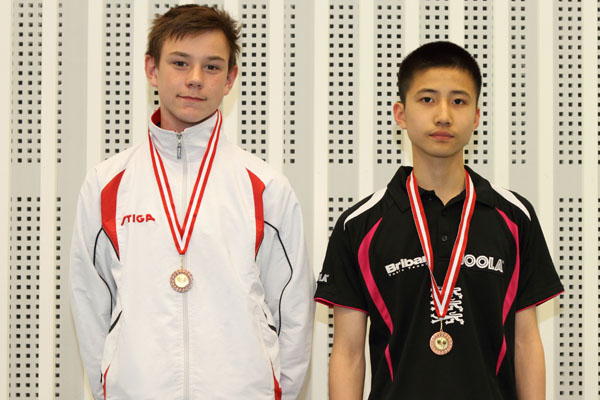 This meant that Pang would play a runner-up in his quarter-final. It proved to be a close match against the Swede with great counter topspins from the Englishman, it went all the way to the 5th set, where Pang took an early lead. He managed to maintain this lead and close out a comfortable fifth end.

He drew the number 1 Swedish player in the semi-final and gave a great account of himself but was unable to keep the pressure on in the fourth game where the Swede pulled away and Pang eventually fell 3-1. However, this resulted in a very well deserved bronze medal for the boy from Dorset.