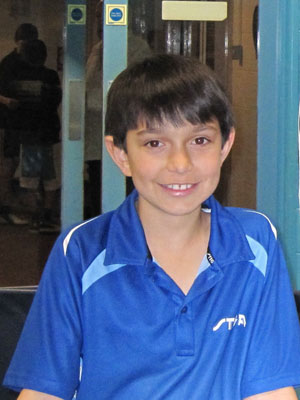 Three Oxfordshire players took part in the English National Championships at Tipton Sports Academy over the weekend of June 1/2, having qualified as one of the top four players in their age group in the Southern Region.  Josh Selby did not excel on this occasion, with his single wins over Kye Aiken (Warks) and Flynn Connolly (Lincs) being insufficient to progress out of his initial groups in Under 13 and Under 12 Boys. Reece Chamdal suffered the same fate in Under 12 Boys, but came alive in the Under 11s, with wins over Jack Burdett (Yorks) and Liam Smith (Kent) carrying him into the last 16 as group winner.

Here he met Joe Saxton (Yorks) and played splendidly to establish a 2-0 lead, but fell apart in the remaining three games, leaving his opponent to march on to the semi-finals.  Reece has improved immensely over the last six months and is getting closer to the level of the top National players. If he can maintain the massive effort and commitment he is showing, he stands a good chance of narrowing the gap still further. 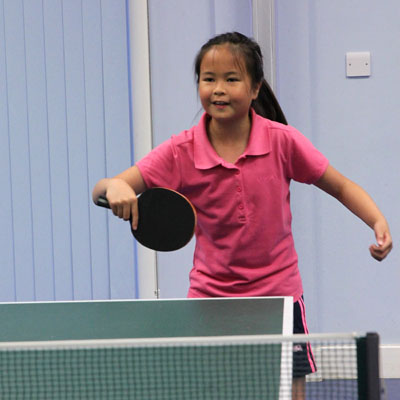 Not to be outdone, Vicky Coll also reached the last 16 in her event, Under 12 Girls. Like Reece, she was making her maiden appearance in the Nationals, and all her recent practice and dedication is paying off.  She is a slow starter, but fortunately her first opponent, Jessica Holloway (Dor), was equally slow off the marks and penalised by the umpire for foul serving. Vicky won this 3-0 and then sprang a surprise by beating the top seed in her group, Gauri Duhan (Yorks, England no 12 U13), playing with great resourcefulness to record another 3-0 victory. Her final group match saw another 3-0 victory over Charlotte Weatherby (Durham).

This was the end of Vicky’s success, as she lost to Sakeena Hanif (Yorks) 8-11, 8-11, 8-11 in the last 16. Vicky is improving and she ought to enjoy competing at Burton, Southampton and Cippenham over the next three weekends. I watched the final stages of the Under 11 Girls’ event and I didn’t think that any of these girls were far out of Vicky’s reach.  Currently ranked at no 34 Under 13 Girl, she has every chance of making the top 20 next year, if she can only carry on in the same happy vein.