The positive impact of the lockdown training regime for young players in the England performance pathway has been praised by parents. 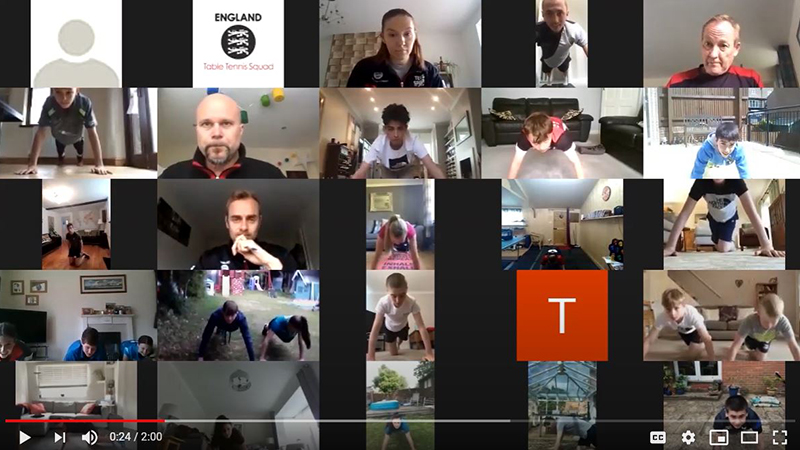 The positive impact of the lockdown training regime for young players in the England performance pathway has been praised by parents.

With working in groups off the agenda during the pandemic, coaches have been helping players to train and practice by themselves on a remote basis for several months.

The 67 youngsters across all the England youth training squads have been working on physical programmes, including Q & A sessions and physical conditioning sessions with our England senior players, nutrition, as well as weekly online catch-ups with the national coaches to assist their development technically, physically and mentally.

All told, each squad has had more than 35 hours of activity during lockdown and the players have between them generated hundreds of clips which have been shared with coaches using file-sharing platform Hudl Technique.

This allows for analysis and feedback and will remain part of the squads’ work once restrictions are lifted.

Many of the squad members’ parents say the sessions have had a huge impact in keeping their children engaged with the sport and in a positive mindset during lockdown.

Typical of them is Helen Clough Jones, whose 13-year-old son Fred Jones is in the Hopes squad.

She said: “Neither me nor my husband play table tennis, so I think Fred felt a bit lost at the beginning of lockdown. We managed to get a robot but were a bit limited how we could help.

“The coaches put together a programme really quickly and it’s helped him to stay motivated and engaged through it all. They’ve encouraged him to set his own targets and be a bit more independent, which is a real positive.

“It’s been great having the comments back from the coaches about his technique and the fitness sessions have been great, with the senior players leading them – they are role models for the younger players.

“It’s been really good for Fred to feel a part of it, even though he’s been on his own. They get together three times a week as a team and that’s been really important and means he’s not feeling isolated. It’s really helped him through this time.”

Some of the other comments from parents include:

Annie Powlesland (son Tom is in the Hopes squad): “At a time when schooling is faceless paperwork day in day out, the benefit of connecting with the TTE table tennis world in a structured way and with inspirational input from the senior elite players is priceless, quite apart from the fitness legacy. Thank you!”

Jane Smallcombe (son Peter is in the England Junior Squad): “Peter is enjoying the zoom meetings and workouts . . . he is enthusiastic when he comes off the phone and it has definitely given him a focus. Thank you for organising the sessions and please pass on our thanks to the other coaches and senior players involved, it’s much appreciated.”

Phil Coker (daughter Naomi is in the Hopes squad): “The effort and steps taken to help the kids stay focus and on track is very much appreciated.”

Maggi Saunders (son Nathaniel is in the Hopes squad): “Many thanks to you and all the England Team – you have given Nathaniel structure and positivity throughout the last few months which has helped him enormously. You have supported all the kids and I am sure other parents will agree it has supported us as parents.”

Dean Nabarro (son Charlie is in the Aspire squad): “Great sessions being organised. They are very lucky – he is really enjoying them.”

Mark Davies (son Rhys is in the England Youth Squad): “It has been a challenge but some of the activities have been really beneficial and will give new possibilities for working with players in the future. In particular we liked some of the on-line group fitness, weekly videos and a technical session where Marcus was able to watch Rhys in real-time and make technical suggestions.”

Programme Manager Matt Stanforth said: “The work the players have shown, despite the limitations and challenges that everyone has faced, has been brilliant and on behalf of the team we would like to say well done and thanks to all the players and parents for their support during this time.”

With a return to indoor play from last Saturday July 25th, it is hoped the England squads can meet up and work together safely in the near future.