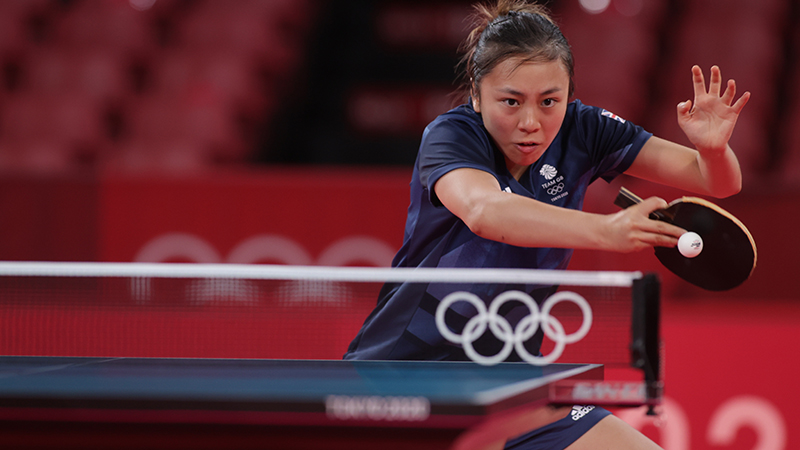 Tin-Tin Ho, the first British woman to qualify for the Olympics in her own right since 1996, was drawn against Commonwealth Games gold medallist Manika Batra of India and put in a positive show in defeat, despite a 4-0 scoreline which masks the closeness of the match.

She said: “It was a shame about the result. I felt I was playing well and was quite relaxed, so I was happy about that. My tactics could have been a bit smarter and she got used to it quite quickly, but that’s what good players do.

“I’m happy with how I played and I’ve made progress, even though it doesn’t look like it on paper. I had a good start but she managed to get back. If I’d got the third it might have been closer.

“I stayed and watched Paul’s first two matches and wanted to watch Paul and Liam in the third round, but you had to leave by 48 hours after you’d finished. I did ask, but I wasn’t allowed to stay.

“I think it’s motivated me a bit more to try to go for it for Paris, now that I know what I have to do. And I wanted to stay longer in the village, so if Paris is in normal times, I want to experience that as well.

“A lot of people asked me about being the first British woman to qualify since 1996 and I’m proud I could be that person. Hopefully, it can be the start of a lot more.”

“They made it a very cool environment and I felt very much at home and comfortable. It was a bit like being in the village at the Commonwealth Games, except the five rings were there!

“We had covid tests every day but apart from that and wearing masks everywhere it was okay.

“We had the Team GB Lodge as well, where we could practise and that was an added thing that felt quite special. There was a table there and a gym and there was food. Meal times were quite difficult in the village, but we spent a lot of time at the Lodge and the food there was quite good. There was a roof area where we could go and chill as well.

“We were in the same hall as judo and boxing and sometimes the boxers were in and we could watch them train. And it was cool to see people like (tennis player) Jamie Murray.”