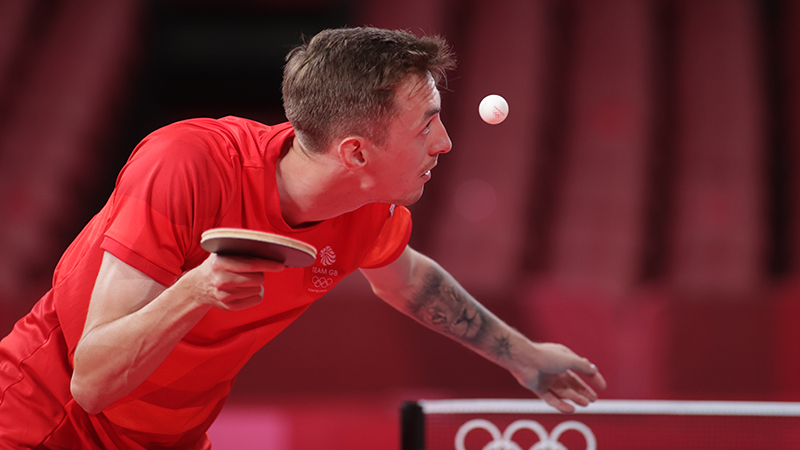 It is fair to say Liam Pitchford did not have the ideal build-up to the Games, missing the European Championships through having to self-isolate and therefore being short of match practice.

Nevertheless, his 4-2 defeat by world No 25 Darko Jorgic in the third round was naturally a major disappointment for Pitchford and the team.

Pitchford said: “I honestly don’t think I played badly and I had a lot of chances – probably chances I’d normally take if I’d played more matches and had a bit more confidence.

“I’m the sort of player who takes confidence from matches, so that’s probably the hardest part of it, not being able to play as many matches as I would like.

“I feel it was a match for me to take, that’s the most frustrating part. My game’s not in a bad place and it was a few points from victory.

“First match of the tournament, against a guy who’s 25 in the world and has already played a match is not ideal, but it’s how the system is and it’s the same for everybody.

“I probably made a couple of wrong decisions and wasn’t fully confident, especially on my receive. In the rallies, I think I was the better player, which shows it’s not to do with where my game is or playing badly.

“I think struggling with the receive got into my head a little bit. That part wasn’t good and it’s definitely something to work on. I’ll learn from it.

“It happens in sport and I can’t dwell on it, I’ve got to move forward, and that’s what I’m trying to do.”

Slovenia’s Jorgic went on to defeat third seed Tomokazu Harimoto of Japan to reach the quarter-finals and Pitchford added: “He’s had some great performances recently and I’m not surprised he beat Harimoto, because he’s good enough to do that.”

Pitchford will now travel to a WTT event in Hungary later this month and said: “I probably normally wouldn’t have gone to Hungary but I need to play matches.

“I’m going to take some time to clear my head and then try to get back into it. I know I’m doing the right things, it’s just about playing matches and hopefully starting the season from there.”

As a ‘veteran’ of three Olympics, Pitchford has experienced a variety of of atmospheres, from the buzz of a home Games in London to GB’s most successful modern Olympics in Rio, through to a covid-era Olympics. He said being part of Team GB was still fantastic, despite the restrictions this time around.

“The set-up in the Team GB camp wasn’t different – it was great conditions, we had everything we needed and the atmosphere was great,” he said.

“Obviously, it was a little bit different in the village and at the venue, with no spectators. We were having to do tests every day and there’s always that worry that it might come back positive and you can’t play and can’t go home either. So it was a bit different, but I enjoyed it nonetheless.

“It’s given me the motivation to push on to the next one. The Commonwealth Games is the focus now and hopefully we’ll have spectators back then. Being a home games means I’m really looking forward to it, so things aren’t all bad.”

Pitchford also said it was great to have Tin-Tin Ho as part of the team – the first British woman to qualify in her own right since the Atlanta Games in 1996.

He said: “It was good. I honestly think she’s improved. At the camp in Nottingham she was training with us and was putting the work in and keeping up.

“She had a tough draw against a tricky player but she played really well and she’s definitely taken a step up, which hopefully can give her a boost to keep going.

“Hopefully, practising with us helped her and at the Commonwealths next year, she’s definitely got a chance. It’s definitely good for the women’s game and hopefully it can inspire the next generation.

“She’s a nice person and a bit of a calming influence when things get stressful. She sees the best in things and it’s good to have someone like that around.”