Gill Smith, a stalwart of the British League and a Table Tennis England Vice-President, has died at the age of 78. 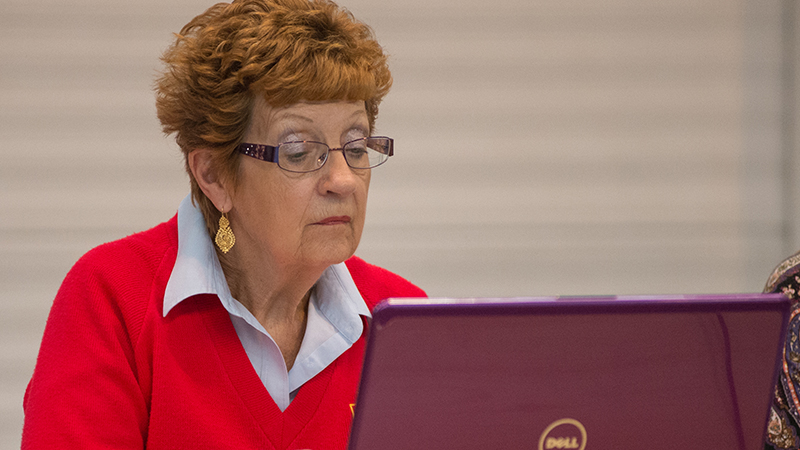 Gill Smith, a stalwart of the British League and a Table Tennis England Vice-President, has died at the age of 78.

Gill was known to thousands over the years through her roles as Administrator and Organiser of the Veterans’ British League and Referee of the Women’s British League.

Her career with the British League stretched back some 25 years, beginning as part of the VBL administrative team, going on to run the results service and taking over as Organiser from 1997, a role she held until last season. She had retired as WBL Referee, another long-standing role, at the end of 2014/15.

As well as her British League roles, Gill also refereed both the Cadet & Junior and the Under-11-to-Under-14 National Championships.

In recognition of her years of service, Gill was presented with the Ivor Montagu Award by the ETTA in 2007. The citation read: “For her work as Administrator of WBL; Administrator and then organiser of VBL since 1997.”

She became a Vice-President of Table Tennis England in 2015.

Many have paid tribute to Gill for the huge commitment, expertise and love she brought to the sport.

Alan Duke, who worked alongside Gill as VBL referee for many years, said: “I think the thing that Gill enjoyed most as Organiser, although a little anxious about it at first, was the social side of the weekends when she got to meet all the teams and players who had been just names in her admin role.

“And not forgetting the meals, with a glass of wine (or two) – she sometimes even made sure that a glass also got to the Control Table on occasions!

“But this was only a small part of her role. Prior to the actual weekend, she would spend hours on receiving entries, liaising with teams, making site visits to venues and hotels.

“She was a pleasure to work with, as she would always keep me up to date as referee, know which queries needed to be directed to the referee, and work hard to ensure that there was a full team of umpires recruited for the weekend. On the rare occasion when this was not achieved it wasn’t because of any lack of effort on her part, as she would often be trying until the last minute to cover any enforced late withdrawals.

“She also made sure that all her team were well looked-after at the events. A good Organiser makes the Referee’s job so much easier in ensuring a smoothly-run event, and Gill was one of the best.”

British League Chairman Chris Dangerfield said: “Gill was a really nice lady, bursting with passion and love for our sport.

“She was the epitome of a true volunteer, who gave her time freely without the need for thanks. The British League and indeed our whole sport is worse off for this loss.”

Table Tennis England Chairman Sandra Deaton said: “The affection and esteem in which Gill was held by so many people speaks volumes for her as a person and for the contribution she made to our sport.

“We were so lucky to have her and her loss is a very sad day for so many members of the table tennis community.

“Our thoughts are with her family and all those who knew Gill.”

Gill is survived by her daughter Sue and son Nigel and two grandchildren, Madison and Cassidy.

Her funeral service will be held at Cheltenham Crematorium, Bouncers Lane, Cheltenham, GL52 5JT at 1.45pm on Wednesday August 1, followed by a wake at Jurys Inn, Gloucester Road, Cheltenham, GL51 0TS on the same day from approximately 3-6pm.

The family has requested no flowers, but donations to Sue Ryder Charity can be made on the day at the Crematorium. The family would also like to hear from anyone who has a memory of Gill which they would like to have shared during the service. Her daughter Sue said: “Funny stories would be great as she expressed a wish that it was to celebrate her great life, as she put it.”

The family has also asked that, in order to make sure there is adequate seating, service stationery and buffet arrangements, people could let them know whether they will be attending the funeral service, the wake or both. Please email [email protected]