Geof Bax, veterans’ world champion, VETTS stalwart – and star of a National Lottery film about table tennis – has died at the age of 88. 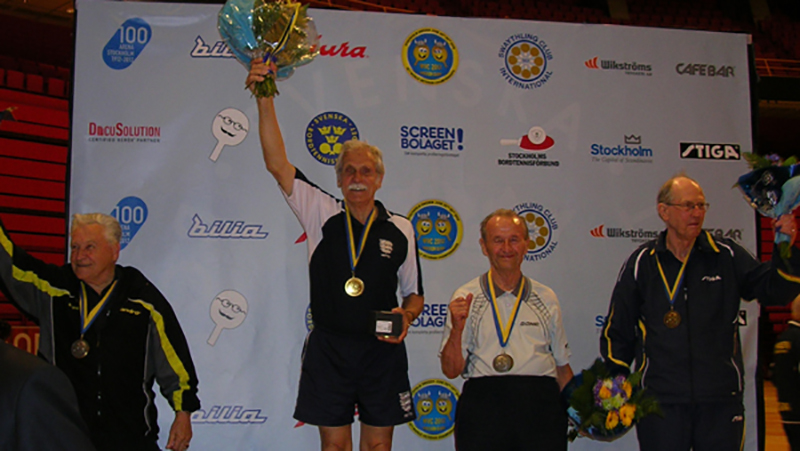 Geof Bax, veterans’ world champion and VETTS stalwart, has died at the age of 88.

Geof stood on top of the podium at the World Veterans’ Championships in Stockholm in 2012, winning gold in the MS80 category. It was one of a collection of medals on the world and European stages, including doubles gold at the Worlds in New Zealand two years later, claiming the WD80 category alongside German partner Gunter Kraus.

More recently, he was a bronze medallist in the MS85 class at the Europeans in 2017, also in Stockholm.

Geof himself said at the time: “After years of participating in world and European tournaments it was an incredible feeling to win the final, especially after such a hard-fought match. This is my greatest achievement after over 60 years in the game and I hope that this win will inspire others to play, and keep playing the game.”

A huge number of tributes have been posted on the VETTS Facebook page, where Chairman Jan Johns wrote: “Geof will be remembered as a charismatic gentleman with a ready smile and twinkle in his eye, who had time for everyone, offering encouragement and support. He will be fondly remembered by all.”

As well as his huge success on the table, Geof was also a Level 1 Umpire. He was also seen on national TV as one of the stars of a National Lottery promotional advert at Christmas 2015.

The film told the story of a match between a team of young players and a team of veterans, showing how The National Lottery raises money for schemes which bring people together.

It showed the young players from Greenhouse Sports meet their match when they come face to face with a team of over-70s players from VETTS (Veterans English Table Tennis Society), including Geof.

Once again, his own words from the time show Geof’s outlook on the sport: “Making the film was great fun. I knew a few of the young people from tournaments we’ve played at. That’s the great thing about table tennis – it’s an intergenerational sport and it is the best sport for keeping your mind and body fit.”

Geof’s wife Sally is herself a multiple medallist at international tournaments and was able to spend some time with Geof in hospital before he passed away last Thursday.

The thoughts and condolences of everyone at Table Tennis England are with Geof’s family at this sad time.