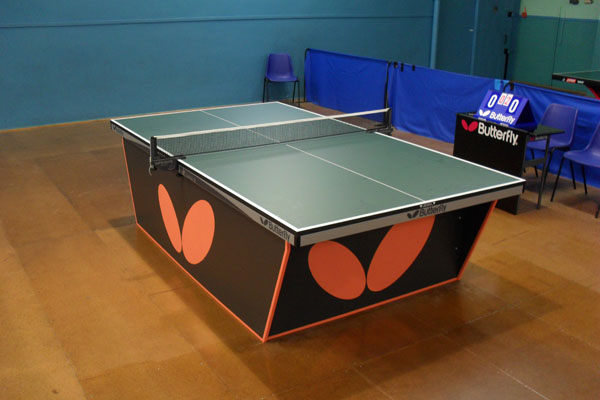 The tables are Butterfly Centrefold 25 Rollaway with green tops and volunteers at the centre have added an 18mm wood panel skirting frame which is attached to the undercarriage and supports the table providing extra weight and stability.

This is a fundamental requirement for the centre, which prides itself as having stand alone tables which are permanently stationed in each court and not rolled away after use, as is the case in many centres.

The skirting stops the ball going under the table and allow easier cleaning of the floor and the progressive centre have painted four black base skirts which have red, yellow, orange and silver butterfly logos and five silver base skirts with red, black, blue, purple and magenta logos respectively.

The 11th staging of the summer veterans event promises to be an exciting event because as well as the new fast tables the centre now have two humidifiers in the hall which has helped eliminate the majority of the condensation which gives some players problems during warm weather.

This event has become very popular and well established and is a fine opportunity for players to play plenty of sets and blow off the cobwebs in preparation for the new season’s action.

The Saturday of the event sees group play for both men and women and Sunday commences with a doubles event with any lady pairing that wishes to play also invited. The doubles is played to a knockout after which time there is a band A and band B singles event with further smaller groups determined by your Saturday finishing place before a straight knockout to determine the winner of each group.

With cash prizes for every event winner and runner-up the tournament goes from strength to strength a proves popular with all who attend.