New-look WTT, plus a funding boost to end the year

From the eye-catching launch of World Table Tennis to a UK Sport Olympic funding boost to end the year on a high . . . read part two of our review of 2020. 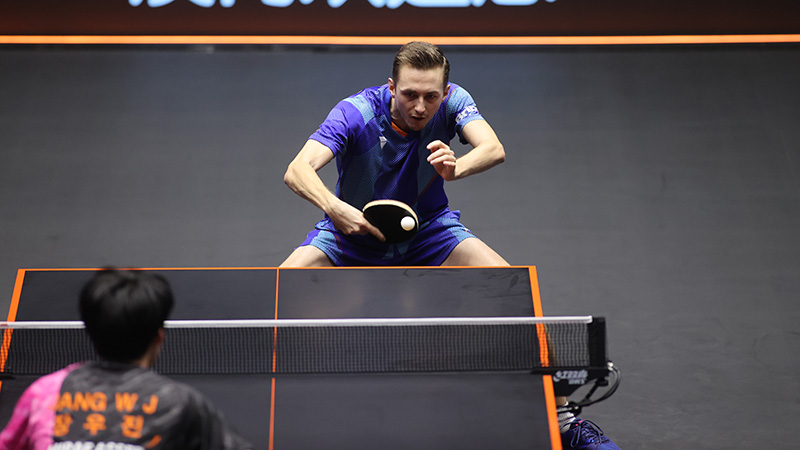 As the ‘new normal’ continued to impact on all our lives in the second half of 2020, part two of our review of the year looks at how the table tennis family continued to adapt to restrictions and a covid-safe return to play.

The start of July saw us still in lockdown, but that did not stop plenty of activity online. Leading the way were the elite England players, who passed on their knowledge and experience by leading the England youth squads through a series of online workouts.

It was online too for the latest generation of umpires, who worked hard to achieve their Level 2 qualifications and stay on track to officiate at the Birmingham 2022 Commonwealth Games.

Lockdown also unlocked a big project for Graham Frankel, the coach from the BATTS club in Harlow completing his book Ping! A Personal Perspective on Table Tennis, which charts his personal history alongside momentous events in world table tennis in the last 50+ years.

Despite Tokyo 2020 being postponed for a year, nine GB athletes learned they had qualified for the Paralympics.

And the England squad were back on the table at long last as they returned to training in a controlled environment.

Things continued to open up in August and September, with clubs such as Rowhedge TTC in Essex and St Neots TTC in Cambridgeshire typifying the adaptations that were necessary to allow a return to play.

The young players in the England Pathway also returned to training camps and showed how they had used the lockdown period to develop their games.

However, many of our members, as well as those playing other sports, reported problems in finding places to play, prompting Table Tennis England to join a group of sports in issuing a warning about the future of grassroots sports venues and later calling for a Sports Recovery Fund to be set up.

Paralympic athlete and NHS doctor Kim Daybell featured in the Sky News Covid Stories podcast series, opening up to presenter Dermot Murnaghan about his work on Covid wards at the Whittington Hospital in London and putting his Tokyo Paralympic ambitions on hold for a year.

John Hilton remembered becoming European men’s singles champion 40 years on and, although this year’s European Championships was cancelled, a return to top-level table tennis was heralded as Liam Pitchford was named among the competitors for the ITTF’s #RESTART series.

Pitchford also joined some of the England youth players for a socially distant photo shoot to launch an eye-catching new England kit.

Our Chairman, Sandra Deaton, was elected to the Board of the European Table Tennis Union and also joined the panel for our live Ask Us Anything event, at which members had the chance to put questions to senior figures at Table Tennis England.

Former top-10 Cadet player Kathryn Delaney was seen by millions on TV as table tennis featured in the latest advert for comparison site U-Switch, while local league player Don Fear won a million on TV as his general knowledge saw him scoop the jackpot in ITV’s Who Wants To Be a Millionaire?

The big news in October was the MBE awarded to Table Tennis England Chief Executive Sara Sutcliffe in the delayed Queen’s Birthday Honours, for services to table tennis.

On the table, Gavin Evans was officially appointed as National Men’s Coach through to the Birmingham 2022 Commonwealth Games.

Maria Tsaptsinos led her AEK Athens team into the top flight of the Greek League for the first time, while seven young members of the England performance pathway and nine para table tennis athletes received grants from the Backing the Best programme.

November saw the return of international table tennis after many months in the covid-induced wilderness.

Liam Pitchford reached the main draw of the Men’s World Cup in China, losing out 4-3 to Dimitrij Ovtcharov in a thrilling last-16 tie.

He later competed at the ITTF Finals, before being part of the historic first event under the new World Table Tennis (WTT) banner – winning his first match at the tournament. After eight months off, Pitchford had plenty of positives to take from the events, and acknowledged there was plenty to work on, too.

England youth player Felix Thomis came up with a novel way of raising funds as he put together a cookbook, featuring recipes from a host of table tennis personalities – as well as from Prime Minister Boris Johnson.

Table tennis was also given the TOWIE treatment as The Only Way Is Essex filmed at the BATTS club in Harlow.

December saw Liam Pitchford continue his return to competition by helping his Russian club UMMC reach the Champions League semi-finals, where they were edged out by eventual champions Borussia Dusseldorf.

Kim Daybell won the National Lottery Spirit of Sport award and the Teenage Cancer Trust presented a posthumous award to fundraiser and table tennis player Stephen Sutton for his contribution to the Trust in raising almost £6 million and counting.

And there was a huge dose of good news to end the year as UK Sport awarded British table tennis funding of £1.35 million through to the Paris Olympics, with British Para Table Tennis receiving just under £3.7 million for the Paris Paralympic cycle.