The future of table tennis will be brighter after the International Table Tennis Federation revealed the four new colours which will be allowed as racket coverings – watch video showing how the process has unfolded. 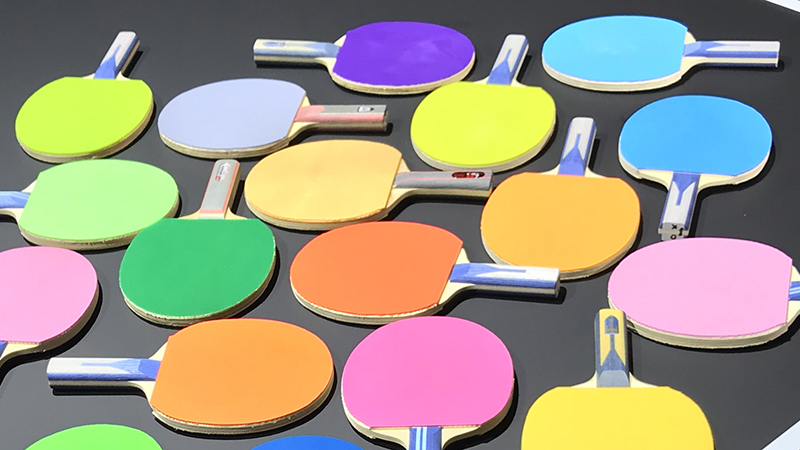 The future of table tennis will be brighter after the International Table Tennis Federation revealed the four new colours which will be allowed as racket coverings.

Pink, violet, green and blue were selected after a multi-phase procedure which saw an initial palette of colours whittled down via match-play tests and consultation with elite players.

The story of how this process played out can be seen in the video below.

The new colours will be permitted on one side of the bat from October this year. The covering on the other side must remain black.

Claudia Herweg, ITTF Head of Equipment, said: “We are of the opinion that table tennis is colourful because it is such a diverse sport.

“We also have the impression that many players find it important to customise their material and coloured rubbers will offer another opportunity to do so in the future.

“We are looking forward to the new products and for all those who still have doubts, nothing will change – those who prefer a classic look can stick to the red and black rubber combination.”

England No 1 players Liam Pitchford and Tin-Tin Ho both think they will choose to stick with red and black even when they get the chance to change later this year.

Liam said: “If I had to choose, probably blue, but I think I’ll stick with red and black, to be honest.

“I don’t really see the point, but if they think it’s going to make table tennis more appealing, then why not?

“I don’t see that many people changing but it’s just another rubber and I’m pretty sure it will play exactly the same.”

Tin-Tin said: “I think it’s a creative idea and I can see it could be good for the sport and make it more personal to the players, so people can get a sense of their characters.

“At first glance, I think I prefer the traditional colours, but I might consider changing in the future. I like the colour blue generally, so I think if I were to change, I’d change to blue.”