Our Ping Pong Parlour initiative has won a prestigious national award from ukactive – and the TT Kidz programme has been highly commended. 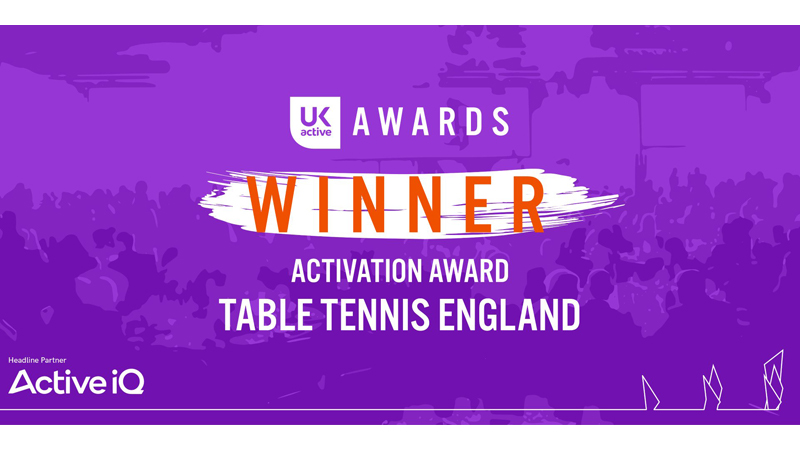 Our Ping Pong Parlour initiative has won a prestigious national award from ukactive – and the TT Kidz programme has been highly commended.

Ping Pong Parlours was named winner of the Activation Award at the ukactive Awards ceremony today, from a shortlist of seven nominees.

The Activation Award category recognises an organisation which has been running an event, campaign or project in the last two years that has inspired and encouraged people to be more active in any setting: whether that be in their home, in the gym or leisure centre, on the way to or at work, or outdoors.

Meanwhile, TT Kidz was one of two projects highly commended in the Generation Active category, which recognises a programme, project or initiative that engages, promotes and sustains physical activity in children and young people – inspiring them to be more active, more often.

The category, which featured eight nominees, was won by Swim England for a collaboration with Disney.

The awards were decided after all the organisations and initiatives on the shortlists, including Table Tennis England, made presentations to the award judges, giving more detail about their schemes.

“It’s great recognition for everything the project has achieved over the last couple of years and in particular the vast number of participants it engages.

“We hope this is just the start, and the project can continue to engage participants whilst using table tennis to increase physical activity across the country.”

Ping Pong Parlours are informal table tennis venues for people to pop into and play, free of charge and without having to book, and typically occupy empty retail spaces in shopping centres.

They are open to everyone, but are particularly aimed at those who would not normally play sport, and provide people with an introduction to the sport in a relaxed, informal setting in a place where they already spend time.

There are also opportunities for clubs, leagues and coaches to engage with players at Parlours and offer them further playing opportunities.

Although the project has been affected by the pandemic, with shopping centres closed for much of the past year, Parlours are beginning to reopen and Table Tennis England believes the number of Parlours will return to pre-pandemic levels. In total, since the project started, there have been more than 60 Parlours across the country.

TT Kidz is aimed at giving seven-to-11-year-olds a fun introduction to the sport.